Iraq and the Social Impact of War 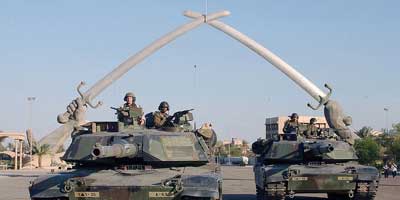 "Hands of Victory" in Ceremony Square, Baghdad, Iraq during Operation IRAQI FREEDOM - 2003. The hand and arm are modeled after former dictator Saddam Husseins own and surrounded with thousands of Iranian helmets taken from the battlefield. The swords made from the guns of dead Iraqi soldiers. Photo source: Wikipedia

Women and Children - the Forgotten Victims

Over the past weeks the militant rebel group ISIS (Islamic State in Iraq and the Levant) has been making headlines as they progress through both Syria and Iraq – with Iraqi security forces appearing to offer very little in the way of resistance.

This has sparked debate throughout the Western world about what intervention if any is appropriate to ensure that the democratically elected government in Iraq remains stable, and whether it should even be viewed as the responsibility of the West to intervene in such matters at all.

This all comes in light of discussion between nations about the possibility of launching air strikes against ISIS troops as the Iraqi government has requested in order to help them retain control of the region. The ISIS group have captured the largest oil reserve in Iraq and are progressing steadily towards Baghdad.

However, in light of the escalating international responses, what is often forgotten are the most vulnerable individuals - the women and children who have suffered from seemingly endless conflicts in this war-torn region.

This most recent ‘civil war’ in Iraq is just one of many conflicts which have blighted the region, with the ISIS troops presenting but one occupying force proceeded by the US, UN, and Iranian troops for years before this, in addition to the rule and remilitarisation of the country by Saddam Hussein.

In recent history, there have been many conflicts beginning with the Iran/Iraq war which raged throughout the 1980s and resulted in massive civilian casualties many of whom died from poison gas attacks in the Northern Kurdish region of Iraq.

This was followed by the Gulf War, which resulted from the Iraqi invasion of Kuwait and UN declarations decrying this action, which were followed by massive aerial bombardment of Iraq by the US and an Iraqi surrender. This course of action appears very similar to that proposed by many spectators, with President Obama recently announcing that he would overrule Congress on any decision to offer military intervention.

The proposition of air strikes once again being used in Iraq is a troubling one; estimates on civilian casualties from airstrikes in the first Gulf War vary but are thought to be between 2,000-3,500. The Gulf War was followed by the Iraq War of 2003, which is one of the most divisive modern conflicts with colossal moral implications and shortcomings; it is widely believed to have been an illegal conflict without valid justification. Furthermore, throughout all of these struggles there has been an ongoing sectarian struggle between Sunni and Shi’ite Muslim groups.

Reuters estimate that over 100,000 people have been killed in bombings, violence and even beheadings perpetrated by a variety of different groups, which has escalated to such an extent that both groups believe they are acting in retaliation to past atrocities carried out by the other.

This kind of death toll from violence within Iraq has had a huge impact on women and children who are left widowed or with injured husbands unable to support or care for themselves.

The US-led invasion of Iraq beginning in 2003 has led to a humanitarian crisis in the region which has seen over a third of the Iraqi population fall into extreme poverty and almost 100 people killed daily before this most recent conflict began. Almost four million people became displaced following the Iraq war with women and children making up the majority of this group.

There have also been increasing worries about women’s rights following the conflict, as although the economy has improved with the new democratic system many feel that attitudes towards women have become increasingly reactionary.

One Iraqi woman interviewed by the BBC states:

"Women used to behave in a more liberal way under Saddam. And I hate to say that, because I hate Saddam so much, but women were freer under Saddam".

One in Ten Women Widowed

This highlights an increasing problem as in a country where divorce is heavily frowned upon and over 30 years of conflicts have left millions widowed unable to act independently due to restrictive social customs on women, thousands of women have been left severely disadvantaged. It is estimated that, during the past 30 years, 1.5 million women have been left as widows in Iraq, which represents an enormous 10% of the female population, with many having to resort to living in specially devised camps for widows.

It is clear that humanitarian efforts are failing women in Iraq.

For those who are able to gain employment there is often little respite: two million women in Iraq are the sole earners within their family either as a result of their husband’s injuries or of simply being widowed, and often earn wages woefully insufficient to support their families. Though Saddam Hussein’s atrocities were many, one consequence of the war and the overthrow of his dictatorship was that a monthly benefit paid to widows was ended, and has not been reinstated by the new government.

There were also rewards for members of the military who married widows, which although not an ideal solution, did help to award some respite to the poverty endured by many women and children who had suffered throughout the many conflicts in Iraq.

The new government has instigated bereavement payments between $3000-4000 – depending on whether the individual killed worked for the government, in addition to a monthly benefit of $85 plus $13 per child; however, for many this is simply not enough to provide adequate accommodation, food, and other costs of living.

Furthermore, there have been increasing complaints that the heavily bureaucratic system through which these benefits are claimed faces issues of massive corruption, with many who should be entitled to government aid failing to apply for the grants as a result.

There have been further social costs for women and families in Iraq as a result of ongoing conflict, such as the thousands of women who have found themselves without homes, husbands and means of financial support, leaving them with only one option to support themselves and their families: prostitution.

Women who find themselves are often exploited by ruthless pimps who are rarely prosecuted, whilst many find themselves serving repeated jail sentences of three to four months simply to be forced to return to prostitution upon release.

Conflict only fuels the increasing exploitation of women in this manner as not only are more women left vulnerable by the loss of their husbands, but sadly it is often the occupying forces that are found to be paying the prostitutes in the first place.

The Human Cost of War

When speaking of the social implications of war and the catastrophic effects intervention in Iraq has had upon families, it is far too easy to forget the impact this can have on soldier’s families from the intervening nations. Many have died in conflicts within Iraq leaving divided families on several conflicts. In the last conflict within Iraq. roughly 4.500 US troops were killed, 318 from the coalition nations and over 100,000 Iraqi deaths as a direct result of the conflict.

All of these deaths have a huge impact on families, and need to be considered carefully before any further intervention is suggested.

Learning from the Past

In the light of potential new conflicts it is important to remember the impact of those in the past, especially with reference to the colossal implications placed upon innocent civilians within Iraq. It will also be necessary to reflect on the need for some form of intervention as increasingly sectarian dispute between Sunni and Shi’ite Muslim groups grow increasingly wide spread and violent.

Though the progress of ISIS is certainly a troubling prospect, it is paramount that any future intervention by outside forces within the country learns from past mistakes and that a long-term plan is implemented to secure the safety and security of women and children within Iraq.