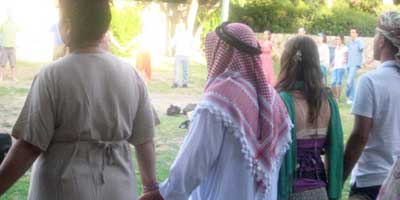 On  21st June 2012, hundreds of people from all over the globe were gathered to celebrate the seventh Jerusalem Hug, to walk hand in hand around the city walls, together with the inhabitants of Jerusalem; to stand shoulder to shoulder, to share the wish for peace and love for Jerusalem; to pray, to sing, and to dance together for peace and respect for all humankind.

The Jerusalem Hug is a symbol for another way to achieve peace.

The belief in a political solution of the Middle East conflict has globally disintegrated to nothing.

There is a need to find, as it seems, another way to achieve this. From the Hug’s organizers' point of view:

“The only way is through our hearts.

We believe that when we find peace in ourselves and when we are able to forgive, world peace will come closer.

This kind of change can only come from within; from the bottom of one’s own heart.”

The Jerusalem Hug gives expression to this wish for change, as a concrete statement.

Jerusalem stands as a symbol for peace and forgiveness in the world. Let Jerusalem be a city of connection, the heart of the world where unity and peace will be a fact.

We gathered again this year – hundreds of people, from all over the world, people of every  religion and nationality, all came for the same purpose: to share their love for Jerusalem, and through that – their love to all people.

"I Love You"At 4:30pm, at the Art Park opposite to the walls of the Old City, people started to arrive, very few at the beginning, but by and by they were coming – adults and children, young and old, Israelis, Palestinians, and internationals.

Everyone received a “heart” sticker to stick on their clothing.

Then, a large, organized group of people arrived –  with an “I love you” sticker on their clothing, joined us as well. They brought a large poster with them which read: Love Revolution. 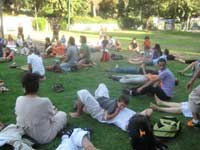 The ritual began.  About five spiritual women led the event. They invited us to form a circle. In the middle of it there were three clay wares with water in them, a bunch of a feathers, and a smoking wood with sage leaves.

Humming, hands drumming the body, eyes closed, meditating…silence…and then, from the heart of the circle, where the group of women and men sat, a special humming had been heard – pure, soft voices…in a perfect harmony. That was a very unique moment and very strong.

The circle started moving –people smiled to each other, some stopped to hug each other, some kissed the one next to them. Then, by request, we sat down and lay in silence on the grass, until the drum started its voice, inviting to get up and to start moving toward Jaffa Gate. ( Arabic: Bab el Khalil) 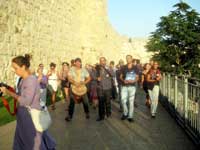 Jerusalem’s Old City walls, built in the early 16th century by the Turkish Sultan Suleiman the Magnificent, have eight gates. All but one (the Gate of Mercy) still serve Jerusalemites and visitors streaming to its markets, and sacred and historic sites. The Jaffa Gate was the destination of Jewish and Christian pilgrims disembarking at the Jaffa port, hence its name. It led (and still leads) directly to the Jewish and Christian quarters, as well as to the most popular parts of the market, and to the Tower of David Museum, once Jerusalem’s citadel and now a showcase of its history. 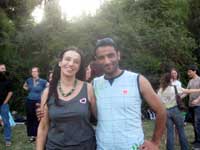 Irit Hakim with YousefFrom the gathering place in the Park, we went to the Jaffa Gate. I and Yousef – a Palestinian friend of mine, went to meet a friend of his – a guy from Shiloh (a settlement in the Occupied Territories) - who was waiting up the road.  To those who do know about the Israeli-Palestinians conflict, that fact would raise their eyebrows, since the settlers are usually known as the enemy of the Palestinians, living on Palestinians lands, fighting with them over lands, and trying to hurt them in any way they can.

But, all must know – there are all kinds of people everywhere, and there are many good people among the settlers, who want to live in the West Bank in coexistence, even under Palestinian rule.

When we came back to the gate, the people started the way up, holding hands, making a very long chain of people. The chain was long: one end was in the Jaffa Gate and the other end almost reached to the Damascus Gate (Arabic- Bab el Amud, Hebrew- Nablus Gate), which is close to the Muslim district and faces the way toward Nablus.

A prayer for peace was given in three languages.

Taking a Break for a Market Visit 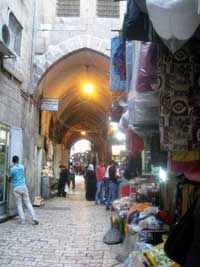 Old City Market, JerusalemAs this part ended, and before gathering for the last one, Youssef and I decided to go to the market. It was so nice to go along the market lanes, with all the colors, smells, and merchandise. The shops belong to Palestinian owners, selling products from Palestine, but as it happens everywhere else in the world nowadays, there are many  products from the Far East, too.

Yousef lead the way to a place where we ate wonderful sweet canapé made of semolina dough upon which there is white cheese with lots of syrup and crushed cashew nuts on it. On the way, we stopped at a shoemaker to mend Yousef’s torn sandal. The shoemaker’s place was tiny, and a large sewing machine takes most of the space – a very rare sight.

We came out of the Market through Damascus Gate (Bab el Amud) and headed up to the place where the people gathered for the final session – drumming, singing, and dancing.

Drumming Up Songs on a Starry Night 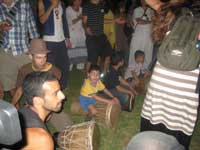 The drumming session was a long one, drawn into the night. There was time for us to have a coffee at the near  the Mall.  We found a table with a view of Jerusalem in the dark. It was so very beautiful:  The neighborhoods of Jerusalem are built on  mountains around the city, like a crown. The many lights all around, on the black background were like a starry sky. This was one of the most exciting sights.

We returned  again to the group, who were still  drumming singing and dancing; I stayed just a while longer, then at around 9pm, I said my good byes, and took the new cable train in Jerusalem to the Central Bus Station, back home, two hours away from Jerusalem.