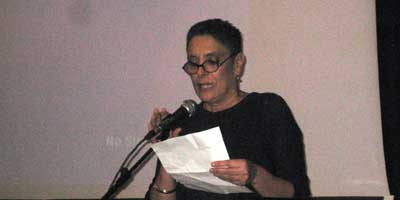 Art to End Slavery of Women

Many women and a few men gathered in the Culture Hall in my city, Rishon Le Zion – in Israel, on the International Day for the Elimination of Violence Against Women – November 26th. The event was hosted by the Municipal Ministry of the Status of Women and Gender Equality.

At the entrance to the Hall, there had been a unique exhibition of artist Galit Einav, who made her pieces out of matches – a unique artistic venture.

Galit Einav, 50, decided to make a change in her life and learn jewelry design at the Shenkar College of Engineering and Design. The college is located in a very shady area of the stock market building.

"In the four years I've been learning in Shenkar*, I could not ignore its surroundings: cafes, shops, and area of visible institutes, hidden institutes, many employed women who [were] brought forcibly. And no one cares. My dissertation was devoted to these women. [My] Motif of 'Use and Throw’ turned matches into women, feelings, pendants, plugs, wires, and pearls.

Every woman is a one of a kind - but there are women who are not, who are transparent, traded, missing and are for use only. In my project of more than 1,500 matches, I will present one match everyday – for them.”

Limor Gore, City Councilwoman, welcomed the audience and marked the first time of a discussion on violence against women which was held in the city council.

“With regard to to domestic violence, a total of more than 7,000 women were treated in shelters and by various authorities in the last year – those who dared to complain.  Only one percent of the total of 200,00 violent men arrive for treatment in the domestic violence prevention centers. Treatment focuses on the victims of violence, and the men, the perpetrators of violence, most of them "stay in the shade."

There is a drastic increase of more than 200% in the number of women after birth who suffer violence inflicted by their partners.

Despite the reduction in the number of murders in 2014 (10 women were murdered by their partners compared with 19 women last year), hundreds of attempted murders have occurred within the family but did not result in death, so they are not counted.” 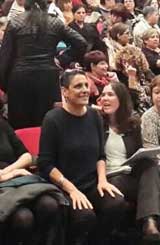 Iris Kagan (left) and Lili Ben Ami (right).Lili Ben Ami, an educator and social activist and Director of the Center of Enlightened Leadership for Women, gave a fascinating lecture. She articulately explained what are "forbidden relationships between older men and young women," and how we should examine these relationships as well as ask ourselves "Who is the responsible adult?”

“The society puts all of us in boxes. With an awareness and action we can be released out of them. “

In the video “Break the Box”, it said, “Sexual violence isn't just about rape or physical harassment. It begins when we hurt people through the words we use and attitudes we carry. Stereotypes of what it means to be a man or woman—for instance, boys should do physical activities and girls need to be 'ladylike' can limit our worth and potential, and create an unequal balance of power that perpetuates sexual violence.”

Lili did an experiment with the audience:

“Close your eyes and imagine a person”; most of the audience imagined a man.

“Close your eyes and imagine a pair with romantic relationship between them, that the difference in years, between them is 35 years. Who is the older?”; most people imagined the man was older.

“This is reality” said Lili. “We all create it. The question is: where is my role in this reality to correct it?”

“Society accepts marital age gap between women and men, only if men are the older ones. Even extreme cases like Woody Allen and his junior partner by 35 years, also the daughter of his ex-wife. Society doesn’t accept a relationship of a man and a girl, but there is an accepted gray area. A man 50 years and a girl of 16 – this is so-called fine.

The projector is always pointed the girl as the “bad girl who behaves wrong”, Lili said.

Where is the line? Is it when the girl wants and agrees? Is that all right? It is acceptable?
Studies have found that by the age of 12 boys and girls are equally sexual casualties.
Then, after that age, the girls are the main victims.

Society is blaming the victim. Even judges do - there was a case when a judge released an abuser, saying:   The man is a Wolf maybe, but the girl is not Little Red Riding Hood.”

“Not everything that is legal is also moral”, Lili quoted Limor Livnat, of the Culture and Sport Ministry.

In his famous novel Lolita, Vladimir Nabokov tells about a 12 year-old girl who has sexual relationship with a 37 year-old widower. She gives birth to a daughter when she's 17; both she and the baby dies. Lolita is described as a girl seductress – cheap, as a sexual being.

The story is told from the point of view of a man. The girl is the victim by all means, but what remains in the collective memory is – a seductive girl.

As you listen carefully to the words of songs you can find all the possible stereotypes about girls - seductive, frivolity, stupidity, etc. It is part of culture. It is our duty to change that: we might tell the DJ not to play certain songs in our events, we might turn off the radio when playing them, and we might not buy CD of singers who sing them. And we must say our words against these.

There is a lot to do: to speak with the youth at home, in schools, and in youth movements. It is our duty.

We should wear gender-glasses, to listen carefully from which point of view the story is told.

And this brings us to the play we watched at the end of the evening: "Black Bird" - the story of Una who shows up at Ray’s, to investigate why he left her 10 years ago, breaking their relationship that seemed to her as love, while having a sexual relationship when she was only 12.

Una and Ray clash between themselves and their feelings. Conflict ranging from anger, confusion, curiosity, and passion in light of questions from the past.

In the show, the pedophile abuser (Ray) was some years in jail, rehabilitated and lived with a woman who has a child. He is the father of the girl (who is on the stage just for a second at the end of the play), who is again a pedophile with a girl of 12…