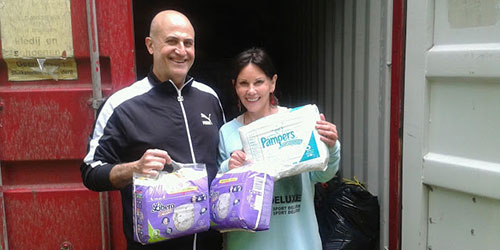 The political tension in Syria and the subsequent civil war is a story that dominated headlines across the globe several years ago. Now, however, stories about Syria in the mainstream press are becoming fewer and further between, and slowly the international community is beginning to lose interest in the situation.

For millions of refugees – innocent victims of a political and ideological war, living in the camps on the Syria-Jordan border, the horror of the war is still fresh. Fighting continues to rage on across the country, and families fear every day for their lives. When this daily reality fails to reach people in other countries, it is all too easy for us to put their struggle to the back of our minds.

Not for Suzy Bochi, and her organisation, SOS Syrian Children, which is entirely run by volunteers. Having visited the country before the war with her Syrian husband, the warm welcome she received, particularly from children, gave the country a special place in her heart. Now, SOS Syrian Children helps to get aid into the country to help those who are in desperate need of the basic goods: food, water, warm clothes. Suzy kindly let me ask her some questions about the important work of SOS Syrian Children and the challenges they face.

How did you come to set up SOS Syrian Children?

My husband is Syrian and it was our dream to spend more time in his country. I loved the temperature, the culture, the food, the nature. I felt at home.

In October 2011, we left without knowing it would be years until we could go back. Home in Belgium, we saw the situation get worse and worse. My husband got depressed and all at once I got the idea to do something for the Syrian people. They deserved it because they had always been so nice to me. They had always accepted me as I was and had treated me and my daughters as princesses. I owed it to them.

I started without any preparation. Just an idea. They said I was crazy and that I would not succeed. But I found power in myself that I had never known I had.

Why is it the children in particular affected by the conflict in Syria you feel you want to help?

Photo: SOS Syrian ChildrenDuring various stays in Aleppo, I got really enchanted by Syrian children. In particular, I adored the street children and children from poorer backgrounds.

They're very spontaneous, funny, and always smiling, even in difficult circumstances. I often saw them working in the camps, shops or even in construction works where they helped their fathers or brothers. I thought to myself, ‘Too young to work’. When I met them on the street they greeted me and, seeing I was a foreigner, they said to me ‘Welcome’!

Therefore, since then they always had a special place in my heart! And aren't they the weakest group in this conflict? They should be Syria's future and yet their dreams and hopes are all destroyed now.

What is life like for children living in Syria today?

They have lost their childhood. They have seen terrible things which children should not see: violence, death. Most of them have lost family and relatives.

They have lost their home, their school, and their friends. Some of them have the responsibility for the family because their father or brothers are gone. Most of them have to work to support their families. Life is hard. No money to buy food, and most of the time no water or electricity. And the constant fear of being shelled.

Not only physically is this hard, but also psychologically: a lot have depression, sleeping problems, problems in communicating. They will carry these signs with them the rest of their lives.

Are there any particular stories of a child’s experience which have touched you?

There are so many, but I particularly remember our visit to the centre of Psycho-Social Support in Reyhanli (TR) where we met with a small group of young children. They followed a group session and we could participate.

The look in their eyes I will never forget. Some were hiding behind the tables and it was difficult to make contact. Because of their war experiences they cannot function in groups anymore. They cannot go to school. Only by playing they slowly came closer. I remember one little orphan girl with the most beautiful smile.

How does SOS Syrian Children help them?

We try to help children in need. We started sending containers full of clothes and toys etc. from Belgium right to Aleppo. But this was quite exhausting, expensive, and slow.

Right now we are collecting money and we are working with trustworthy people who buy the necessary items on the field and distribute for us. It can be food baskets, meals, school materials, warm clothes, blankets, or now with the heat wave in Syria, just water.

What is the most important part of the work you do?

The most difficult thing is finding sponsors and motivating people to support our projects. I have a small team of volunteers who are helping me in this.

Equally important is to find trustworthy people in Syria itself to buy and distribute for us. This is my husband's part. He speaks Arabic and can easily communicate with the people there.

Where do you find volunteers?

Do you have a core group who run the organisation?

Our team consists of my husband and myself, my daughter, and six volunteers.

All of the volunteers are young women with a busy life, job and family but with a heart for Syria. Every two months we sit together and to discuss and plan. They are there when I have a problem, they make suggestions. We're all friends. I didn't know them before I started SOS Syrian Children, but I met them when doing the containers and they love to help me. They all have their speciality, from making our webpage, to writing letters or organizing.

How much support are people in Belgium giving you?

Everyone thinks it is terrific. We sent three containers in the beginning with stuff we had been collecting in Belgium. The response was enormous. Everyone started collecting: schools, sport clubs, churches, and a lot of individuals, too.

They invited us to come and talk about the Syrian children. We did our best to make them part of it. They could also sponsor the trip: by giving €1 they could push the ship 1km nearer to Syria. They could follow on Facebook the voyage of the containers by sea. And when they arrived, they were equally enthusiastic as we were.

Unfortunately, fundraising is much more difficult. People don't like to sponsor because they hear about scandals with funds in big international charities. Sometimes they don't understand the situation in Syria any longer, or they are just fed up with the Syrian tragedy. The press doesn't talk about it any longer.

What problems do you face getting items into Syria?

We cannot do this any longer. It has become too difficult, almost impossible.

How do you ensure that what you send reaches the children? What difficulties do you face with this?

This is my husband's part. Last November, we visited Reyhanli and Antakya, where we had given financial support to a school, and a centre for psycho-social assistance of refugee children. We met trustworthy people who guide us now to the children in need inside Syria and to people who can distribute for us.

We always ask [for] invoices of what they buy and to send us pictures of what has been bought and distributed. My husband is very careful in choosing a project. He wants to know who he is dealing with.

What can others do to help the children caught up in the conflict in Syria?

This is one of the biggest human tragedies in our history.

We need solidarity. We in the West have so much and we often don't realise it. We are afraid to give from our wealth. Everyone should give; even a small sum can save a life. Check the charity you want to sponsor, and donate.

There is really no excuse for not helping.

What would you like to do in the future with SOS Syrian Children?

Although I have thought several times about quitting because it is very tiring and stressful, I doubt I really could stop helping. It is stronger than me and I cannot leave the children without help.

We are not a big association but when I see the pictures they're sending us and I see their faces when they get a meal or a coat, or now in summer the water tanks we are sending them, then I know that this is why I'm doing it.