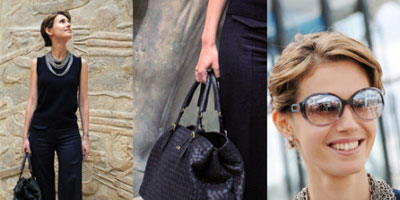 Bangladeshi journalist, Anushay Hossain, began her career in women's rights as an intern at the Bangladesh Rural Advancement Committee (BRAC) where she worked on micro-finance for women and girls in her native country, Bangladesh.

A University of Virginia graduate, Anushay joined the Nobel Peace Prize nominated Campaign For Afghan Women before completing her MA in Gender and Development at the University of Sussex. She spent a year at UNIFEM's (United Nations Development Fund for Women) London office before returning to the Unites States, where she invests the majority of her work analyzing the impact of US foreign policy on women's rights around the world.

Yes they are. Just like you and I connected over social media during the Egyptian revolution. I mean a couple of years ago, this would never have happened.

Everyone loves to talk about the role of social media in these recent revolutions, but I think we really saw it for the first time in the Iranian revolution last summer. There aren’t that many foreign media agencies based out of there to begin with, and Iranians used Twitter to get their news out to the world. It played a critical role because Iranian authorities were clamping down on information so hard.

We really saw the people - like the average person on the street - upload their videos on You Tube, and upload their news on Twitter, and I think it’s progressed in what we saw in Egypt. Now we are seeing the same in Yemen, Libya, Syria. It really is citizen journalism. Governments cannot control information anymore. No one can really.

I think it’s given that ‘ordinary citizen’ an important role but I specifically think it’s given women – women bloggers - a huge platform. It almost makes your gender, especially in these traditionally conservative societies, momentarily irrelevant.

Staying with the subject of the Middle East uprisings, I was very interested to read your Forbes article about Vogue Magazine's piece on Asma Al-Assad. That really highlights the difference between the conversations that are happening on the social media and the topics still being covered by the mainstream media.

Oh my goodness, I was so mad about that and I’m sure it came across in my post! But I was like, "Now is not the time to be glorifying the wives of these dictators". The Syrian regime is on the brink of collapse, it is literally killing its people for their protest, and Vogue runs a piece on Asma's wardrobe?!

People in the media should understand the importance of timing better than anyone. I couldn’t believe how Vogue got their timing so wrong. It was so off that it was offensive, like a slap in the face.

I felt it was so disrespectful to all the things that are happening currently in the Middle East.

To glamorise and glorify the wives of these dictators, especially at a time when the people are really looking at the Middle East region, and the role the US has played historically in propping up many of these dictators. Even in America, where the public really suffers from ADDS when it comes to world affairs, people are beginning to see that governments in the Middle East do not represent their people who are so young, so hungry for democracy.

A lot of people have kind of commented on my post, which was published in Forbes Woman, asking me, "What do you expect from a fashion magazine like Vogue? Why are you so angry at Vogue?"

Vogue is not a publication just full of advertisements. Anna Wintour is not a moron editor-in-chief and Vogue actually regularly publishes really poignant political and feminist pieces. It's even written heavily on the Arab-Israeli conflict.

So it’s not like it’s the Daily Mail gossip section or InTouch Magazine that I was criticizing. Vogue is an iconic publication for a reason.

The revolutions in the Middle East are not something that would have escaped their radar. I think it was poor judgement that they thought they could get away with a glorifying profile on the wife of a Syrian dictator.

Do you think this really highlights a split in the 'women’s world', between mainstream women’s magazines who seem to think that women just want to talk about fashion, and the conversations which are happening on the social media, where women are talking about all sorts of deeper issues?

Exactly. Who cares about Asma Al-Assad's Louboutins? Even the Wall street Journal picked up on how ridiculous it was. Their critique of the Vogue spread was called, 'The Dictator's Wife Wears Louboutins,' designer shoes which start at $700.

It was interesting, when other outlets picked up my piece they dropped the comparison I made in my original post to Queen Rania, Asma's much more famous counterpart.

Vogue defended themselves by saying they had planned to run this piece for a while now. But I am sure it would be a huge PR kind of boon for Asma because she was relatively unknown when you compare her to Queen Rania who  is a darling of the west. Jordan of course is also a key US ally.

But, as vocal as Queen Rania is, she has been very very quiet about what’s been happening in the Middle East, what's happening even in Jordan. When I was writing my post it made me realize that in many ways she's exactly like Asma Al-Assad. Both women are being used by their regimes in the same way as these massive PR machines to project a more moderate, and modern image of the dictatorships their husbands run.

Queen Rania's husband is a huge dictator even though she is so beloved in the US, and Jordan is a major ally. There's no democracy in Jordan. She has made herself a symbol of women's rights for women and girls around the world, but Jordan has horrific honour killing laws and really women don't have many rights there.

So Rania cultivated this image of this modern Arab woman for herself through her fortune, her fashion, and it's worked. It's really effective. And a lot of dictators use their wives to promote a positive image of their countries. It’s not just Asma. It’s not just Queen Rania.

We see it across the board and it’s so effective. I mean I even fell for it. I never even thought about Jordan’s politics, even though I knew what it was, because I was just so captivated by Queen Rania.

You say the world sort of gets taken in by it. How is this sort of idolatry of the dictators' wives perceived in the Islamic world by the women there? Do they see these women as role models, or have they done in the past?

I don’t want to speak for everybody there, but I think that they almost can’t relate to it.

I mean the average woman in Jordan doesn’t live Queen Rania’s life. I think when she first got married to King Abdullah what was relevant was that the majority of Jordanian people are Palestinian. And she’s Palestinian so that was an honour. But what she has evolved to over the course of the past decade just is not a reality for the majority of Jordanians. I recently read that for her 40th birthday they used water to soften the sand of this village in the desert where her birthday festivities were held. The people of that village suffer from severe water shortages, but the desert sand was softened for Rania's guests so it would be easier to walk on.

So no, I don’t think that she represents the Jordanian people at all.

What was so interesting was another piece that got cut from my original post. But in the Vogue article, Asma Al-Assad actually talked about how her house is run, on "wildly democratic principles" and they all vote on where everything goes, from chandeliers to sofas. The Wall Street Journal kind of picked up the fact that it’s great that things are democratic inside her house - but outside her home they've been running a dictatorship for over 30 years, which has been handed down from her father-in-law to her husband.

Interview with Anushay Hossain - Part 4 - From Berlesconi to Virgin Idols

Asma al-Assad: A Rose in the Desert