Mexico: A Machista Culture of Corruption and Violence? 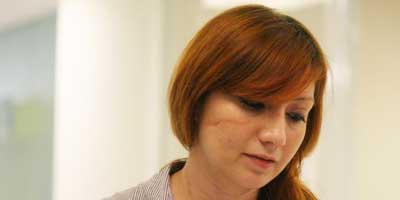 Grettel Rodriguez was assaulted by her boyfriend with a knife, with intent to kill. The case went before the National Human Rights Commission and sparked off a national crusade to combat violence against gender women. Photo: Sipse.com

When Grettel Rodriguez tried to break up with her boyfriend in 2009, he attacked her with a knife, wounding her across her body and face, and nicking her jugular, almost killing her.

In court, the attempted murder charge was reduced to bodily harm, and he was sentenced to only one year and nine months in prison. By the time the trial was over, he only had one more month to serve, and so was released instead.

The criticism and threats from her local society after the publicity from the case prompted Grettel to flee her hometown in fear of her life.

The violence epidemic against women in Mexico is being compounded by the failings of the justice system, which passes sentence in only 1 percent of the small number of murder cases that ever make it to court.

Emily Wassell spoke to Mexican citizen Gab Chaparro of Safe World for Women, on the violence, and society’s reactions to it.

Gab ChaparroMexico is a country steeped in patriarchal tradition, says Gab, a machista background where “men are strength and women are love”. Children grow up in these families, hearing of women’s “obligations” to their husbands, phrases that always start with “you have to”.

On top of that, children never see action taken against violence, and grow up with it normalised, and even glorified, as rich drug cartels set a terrible example of what can be achieved through violence.

The vicious cycle repeats itself through the generations, and there is no escape.

“No matter how hard you study, travel or prepare yourself, as soon as you fall in love, all of this is put to one side so you can make a family”.

The low social status of women in Mexico has a huge impact on their situation. Women who want to work are subjected to pregnancy tests, with a positive result eliminating them from the selection.

Also disregarded are overweight women, women with tattoos, those who have recently married, and those without a university qualification. Even after all this, and with qualifications, women are never paid as much as men, and in instances of sexual harassment, it is the woman, not the man, who loses the job.

On top of that, women with advanced qualifications like PhDs can sometimes receive a higher wage, but when men are not the provider, it makes men feel “emasculated”, and the shame associated with this often leads to separation or divorce.

Women Are Responsible for The Family's Honour

Another tradition is the notion that women are the bearers of not just their own honour, but that of their families too. They uphold it and can ruin it. By damaging their own reputation, they also detrimentally affect that of all her family. A woman's appearance and behaviour are paramount, and her reputation hangs on what people are saying about her.

Verbal insults directed at a female family member by others, can lead to serious domestic violence being committed.  A brother, father, or another male relation in the family have been known to beat, or kill the woman in question. This is to purge the family’s name from her “disgrace”.

Several Mexican regions have legal loopholes which allow for reduced sentencing in cases of violence, or murder to avenge “family honour”. Prison sentences can vary from three days to five years.

In Mexican culture, women are usually targeted and blamed for the violence committed against them. The local authorities have been known to denounce rape victims as ‘prostitutes’. Not only does this nullify any criminal complaint against the assailant, it can also endanger the life of the woman.

Many victims of rape and violence never come forward, for fear of tarnishing their family name. In addition, women are often told that they did something to “deserve it”, and the perpetrators are never prosecuted.

Part of the problem is that domestic violence is pervasive in Mexico. This is exacerbated by the rate of alcohol consumption, and there are no legal measures to help or protect victims. For example, there are no restraining orders against an abusive spouse. And in some cases, when a man is notified by the police that his wife has reported him for assault, he goes home and beat her harder, or even kills her.

The fear of reprisal can prevent a woman from speaking out.

According to UN Women, 1,858 women were killed across Mexico in 2009, which was up by 500% from 2007. However, the levels of violence against women are unknown as the government of Felipe Calderón collected no official statistics.

Gab explains that the anti-statistics law was passed to combat false figures. This was a result of a combination of factors, such as corrupt organisations and unreliable sources. There are also issues with underreporting from victims, and many media publications have stopped reporting cases after journalists were threatened.

She says, however, that the lack of support from the authorities for cases they view as “minor issues” has forced some women to exaggerate or lie about events, in an attempt to secure help or even asylum abroad. This both skews the statistics and leaves other women with “less serious” complaints without police resources.

Some critics think it has more to do with appearances. As cases of violence began to draw international news coverage, the Mexican government did not look like it had control over the situation, and may have resorted to hiding the truth to protect its reputation.

One example is Ciudad Juarez, a city near the U.S. border which was reported in the foreign press in the 90’s after massacres left dozens of women dead. Foreign governments and organisations called for new policies to fight crime. However, it was in the news again recently as mass graves were discovered in a valley near the city.

This international attention is negative for the Mexican government, which had promised to lower the high murder rate and so cannot risk looking incompetent.

Gab argues that in cases that receive international press attention, the victims have been threatened by the government in an attempt to keep them quiet.

By speaking publicly about their case, they are “giving Mexico a bad name”. Meanwhile, the government denies that there is a crisis to “hide its inefficiency in combating crime”.

Maria de la Luz Estrada, a women’s rights activist, agrees, saying there is “a pattern of violence against women, and the authorities are doing everything to deny this is happening instead of working to stop the killings of women”.

The lack of information surrounding the problem makes the situation worse. Gab explains that they are living in an “unreal world”, where they have “no notion of the extent of the problem we are facing”.

The government is not the only authority to be accused of corruption. The local authorities and judiciary services have come under fire as well. Gab explains that poor wages among the workers at the bottom of the ladder, leave open opportunities for bribery.

At the same time, the people running the system often have a vested interest in one outcome or another, for political or personal reasons. She says the system is based on “mutual favours”, and not justice.

A recent case of judicial inaction was an unnamed woman who went to the police to report that she was raped by a bus driver, César Librado. She identified him and his bus route, but no action was taken. Librado went on to rape and kill eight other women in his bus, before a nationwide media campaign finally forced the authorities to arrest him.

Even the few women in positions of power are doing little to further the cause women in Mexico.

Gab explains that they seem to only have their own interests at heart, and are more often seen posing naked for magazines than campaigning for equal rights.

Some charities meant to be helping women have also been accused of corruption and self-interest. They rub shoulders with corrupt governors, and often have no accountability for donations made to them. Gab says that donations made to charities are tax-deductible, so some organisations are thought to exist purely for tax-evasion purposes. On top of that, donations often pay for “exorbitant” salaries to activists, or get diverted to other causes.

According to her, these organisations have a negative effect on the problem, as they distract attention away from the cause, and leave the people who need it without any help.

“These people only hear promises, but they never see or receive anything”.

The women who do want to help make a difference often go unnoticed.

The Effect of Women Living in Fear

All of this has a negative effect on the situation of Mexican women. They live in fear of upsetting their families and of violent reprisals in their homes and communities.

It also affects their health, with breast cancer, diabetes, and obesity on the rise.

Some also vent their frustration in the direction of their children, which aggravates the vicious cycle. Many women seek refuge or asylum abroad, where at least they and their children can be safe.

Education and Awareness are Tools to Fight Inequality

To address the need for gender equality, Gab echoes the keyword from women’s organisations: “education”.

She thinks that young people are more open, as the digital age is changing the information they receive. This will hopefully allow them to learn, change and act upon what they know to become better citizens.

However, she thinks it would take years for any major changes, as the older, conservative generations are set in their traditional ways.

Quicker changes can be brought about by raising awareness of the problems, and their solutions. The authorities could work on better crime prevention methods and punishment for assailants. This would set a better example of the consequences of violence. These changes could be brought about by compromising between respect for traditions and modernisation.

She says that the current problem is worsened because nobody has tried to understand and help the people, who live in the villages of Mexico. The people inhabit the bottom end of the social scale, and are the section of society that suffers the most. However, their issues are not taken into account by policy makers or charities.

Nobody has tried to get to know the real women and children who are being affected by this wave of violence.

But, little by little, awareness is being raised, and Gab hopes that help will soon be available to those who really need it.

As for Grettel, she has lodged an appeal against her ex-partner’s sentence, but she will just have to wait and hope.