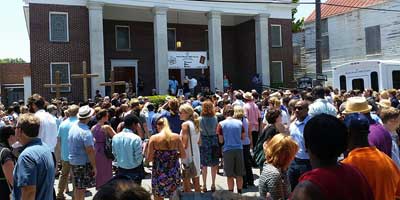 Another Tragic Mass Shooting – But Will It Result In Gun Control Reform?

Vigils were held around the United States in memory of those killed. Photo: The All-Nite | WikimediaYet another mass shooting has occurred within the United States after lone gunman Dylann Roof took the lives of nine people. The shooting occurred in Charleston, South Carolina on the night of the 17th June following a Bible study session which the shooter attended along with his future victims.

The shooting has led to yet more calls to amend gun legislation across the US to ensure that further atrocities cannot occur, by limiting access to guns and ensuring further checks are put in place to guarantee troubled individuals are unable to secure ownership. These calls have become increasingly popularised in recent years with large campaigns led to ensure amendments to gun control legislation with President Obama regularly pledging some form of change, whether that be on increased licensing or limitations on the sale of magazines of ammunition.

However, these kinds of calls are nothing new as there have been similar calls after every mass shooting over the past five years, and yet there has been absolutely no change in any policy in relation to gun control.

The first serious calls for reform from both the president and large swathes of the general public in the wake of a mass shooting came in 2011 in Tuscon, Arizona wherein six people were killed by Jared Lee Loughner, with US Congresswoman Gabrielle Giffords amongst those who were wounded.

In July 2012, another mass shooting, this time at a cinema in Aurora, Colorado led to further concerns over the access to weapons for individuals with serious mental illness. The culprit of that attack, James Holmes, is currently on trial and a court psychiatrist has stated that he had admitted to considering murder at least 3-4 times per day. Evidence was also admitted to the trial from Holmes’ journals which list possible methods for his attack, with one entry listing different methods for his attack finally settling on firearms, reading:

...again evidencing the ease with which he was able to gain access to weapons, and this ease in turn allowing the attack to take place.

Though following the shooting concerns were raised, no changes were made in the law. Another attack only two weeks after the Colorado murders, this time in Wisconsin at a Sikh temple committed by Wade Michael Page saw six more killed. Similarly to the most recent South Carolina massacre, this attack was committed by an admitted white supremacist and was on a religious place of worship, but unfortunately the earlier attack saw no change in legislation that perhaps might have acted to prevent later violence.

Perhaps the most shocking attack, and the one which saw the biggest push to change the law on gun control in the United States was the attack on Sandy Hook Elementary in Connecticut on December 14th 2012, in which 20 children and 6 teachers were killed. Following the tragic events, President Obama attempted to pass a bill which would place tighter regulations on the sale of firearms particularly automatic weapons and high capacity ammunition which have very little justifiable purpose outside the taking of human life.

The bill was a resounding failure after being blocked in the Senate, meaning that the first legitimate ray of hope for gun reform in the United States came crashing down and again no reform.

Depressingly, there have been no major changes to gun control legislation since the assassination of John F. Kennedy over 50 years ago, with only minor changes occurring on a localised independent state-by-state basis rather than large federal reform.

The singular similarity between Lee Harvey Oswald, James Holmes, and all other mass killers in the United States is the comparative simplicity with which they acquired their weapons.

It has long been known that gun-based violence has a disproportionately high impact on women as opposed to men, with six of the nine victims of the massacre in South Carolina being female. Though this could simply be passed off as coincidence given the racial motivation of the attack, a study conducted in the United States showed that gun ownership increased the chance of a woman becoming a victim of homicide at the hands of her husband or boyfriend by 278%.

Since 2006, FBI statistics indicate there were at least 211 mass killings using firearms, which are defined as murders involving four or more victims. Of these instances, the number of female victims is dramatically higher and firearms are a predominant means of carrying out the attacks.

However, instances of public mass killings are not nearly as high as attacks motivated by family arguments or estrangements, with these accounting for 52% of this kind of attack, and break-ups making up 25% of attacks overall.

As can be expected, these have a greater impact on women and children as the murderers are predominately male – with 97% of attacks orchestrated by men, and with 1 in 4 victims being a close family member of the attacker such as a child or spouse.

Additionally, there is a proliferation of the impact of misogyny and white-male privilege which can be seen in the motivations of many of those committing these atrocities. With the vast majority of attackers listed as white males, there are inevitably inbuilt societal incentives behind their attacks, whether these are more subconscious in nature or whether these intentions were clear from the outset, such as the comments made by Elliot Rodger in a YouTube video before he committed a mass shooting:

‘“[He will] slaughter every single spoiled stuck up blonde slut I see…because they all would have rejected [him] and looked down upon [him] as an inferior man if [he] ever made a sexual advance towards them.”

Comments like these make it apparent that there is a sense of entitlement behind many cases of mass murder, and that this entitlement is directly linked to the gender of the attacker and the victims clearly showing an increased vulnerability towards women.

Domestic Violence & Guns in the Home

There is also an increased prevalence of domestic violence in households containing firearms, with the presence of a gun in the home increasing the instances of violent abuse against women by their partners – which is largely credited to the fact that the additional risks associated with defending themselves leaves them unable to do so whilst outside bystanders are less able to intervene.

A recent Seesac report states that in America when a woman is killed by her partner, there is a 66% likelihood that the murder involved a firearm.

In country where there are an estimated 96 guns per 100 people, this cannot be considered a coincidence, and change is necessary to help protect women from gun-related violence.

So why has there been no change?

There are numerous sociological and political reasons for the lack of reform beginning with the right-wing position of the United States Congress and Senate. There is no real doubt that when President Obama spoke about a wish to implement new legislation following the events at Sandy Hook he was being sincere; however, right wing opinions on, and interpretations of, the second amendment have made it almost impossible for there to be any legitimate talk of amendments to regulation.

In the end, the attempted bill to limit the sale of automatic weaponry was defeated by 60 votes to 40 whilst a limit on the sale of high capacity magazines lost with 46 votes in favour and 54 against.

The extreme bi-partisan nature of the American political system during the last few years has made any kind of reform inherently more difficult if not impossible. This is further exacerbated by the issue of pro-gun lobbyist groups such as the NRA controlling the situation from within political institutions with enormous sums of money spent, with which the anti-gun lobby simply can’t compete.

At the time of writing the NRA as a single institution has already spent $895,000 on lobbying efforts with the organisation's highest ever total coming in 2013 amounting to $3,410,000. This enormous expenditure was no doubt in response to the swathe of gun related atrocities that occurred in 2012 and subsequent calls for reform, whilst it is worth noting that these figures only relate to one organisation, not the entire pro-gun lobby.

Media: Shifting Away from the Real Issue

Though there are numerous political reasons there a number of social reasons, for which the fault in part lies with the media.

There has been an observable shift in media discussion away from the need for reform and gun control to more discussion of the motivations of the attackers. This shift has a simple motivation and this is that it is far more lucrative and arguably interesting to discuss criminal psychology and the impact of the attacks on the families than it is to discuss the root causes such as a lack of mental health care and moreover, how it was that these individuals were able to gain access to the weaponry which allowed them to orchestrate their attacks.

The mainstream media has far more to gain by reporting on topics which result in higher viewer counts and readership, rather than considering the moral implications of not making a concerted campaign in favour of reform.

This is no more prevalent than in the most recent shooting in South Carolina, where the coverage has focussed almost exclusively on the racial component of the attack and subsequent search for and capture of Dylann Roof.

In addition to media reporting of events, there is a more prolific issue facing any campaign for gun control which is the popular support for existing gun legislation and opposition to change. A 2013 survey reporting that 50% of Americans wished for gun control to be made less strict or to be kept as it currently is.

The Right to Bear Arms

Finally, there is a further issue of the misconception that ‘concealed carry’ laws and increased gun ownership will increase the safety of individuals by giving them a means to protect themselves.

A 2013 study which used data spanning back to the early 1980s found that for each 1 percentage point increase in proportion of household gun ownership, firearm homicide rate increased by 0.9 percent. In short this means that there is almost a direct correlation between gun ownership and gun based murders, with no apparent decrease as a result of increased gun ownership. When faced with these obstacles and statistics it is easy to see why there is scepticism that there will be any reform following the South Carolina shooting.

No Reform Without Drastic Upheaval

Following the South Carolina shootings, Republican presidential candidates Marcio Rubio and Rand Paul reaffirmed their unwavering support for the right to bear arms if there is a Republican win in the next US election. It seems increasingly likely that no significant reform will take place, and that attacks like that in South Carolina will continue to occur.

Unless there is a drastic upheaval of inbuilt societal and political obstacles to increased US gun regulations, then there is unlikely to be any change, and the most vulnerable in society will continue to be targeted.

Also Read: USA: To stop the massacres, control the guns