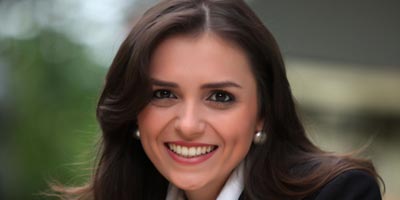 Monica Iozzi is an actress and reporter with a Brazilian TV show called CQC. As a child, Monica was assaulted and held hostage during a robbery at her home.
Fer Amaral interviews Monica about her life, work and experiences...

Have you ever experienced violence against yourself, or known someone close to you who was a victim of Violence Against Women?

I have two, very close female friends who were victims of sexual violence, and I noticed how hard it is to live with this experience.

Sexual violence is just one among several kinds of violence against women.

Women often feel they have to prove themselves in some areas because of their gender. They are perpetually sexualized. Do you think educating children and young people can change this attitude?

This subject needs to be talked about to our children and youth within the educational system.

Changing an adult view - meaning someone with a definite personality, is very hard.

Our human values are built in ourselves since we were a child; it grows within us. If children could grow up into a medium in which the rights and equality between men and women are respected--in which the healthy sexual differences are regarded with respect, then they will have more chances to carry this knowledge through their entire lives.

But this is not a role just for schools, in my opinion. In their houses, parents have to give their children examples and we still have TV, music, and media which are all a good way to discuss it.

Media is an important tool to use for discussing VAW, but we know that young people [in Brazil] don’t discuss human rights a lot. Do you think that the media can reach young people?

The media can and must be the right tool to do it. But I think that right now we must focus on another important fact: impunity.

Situations of violence against women have been noticed much more than before.

The government has launched campaigns on television asking women who were survivors of VAW to denounce their perpetrators.

Now, besides our Women's Police Station, we have a hotline to help women [180], and give orientations about violence against women for the victims, for free.

There are several movies, journalistic programs [tv shows], and books about this issue; but, is it worth it if the man who is the aggressor and is arrested, did not stay in prison?

If his punishment is not effective? There are many cases of women who denounced their perpetrators , but ended up being murdered by them.

So, in this situation it is hard to trust in police work and in justice.

You work with a lot of men as the only woman at CQC, but you said that you didn’t face machismo (male chauvinism) at your work. Do you think that men are more sensitive of gender differences?

I do think about institutions; I think that some business companies that did not join this movement for promoting equality among men and women, black and white, homosexuals and heterosexuals will be left behind.

Besides social and environmental responsibility, people are seeking an attitude of equality from corporations. I’m working with CQC, as a good example to illustrate this.

Monica has a unique, humourous and ironic style when interviewing politicians for CQC.

Truly, I don’t care about a human body exposition, men or women. It depends how this exposition happens, what connotation it brings.

The problem is that women are treated as just desired objects.

It is as if she holds a sign that says:

“I am beautiful, sexy, stupid and submissive. It doesn't matter if I'm humiliated or disrespected. Actually I will not understand that this is happening. I don't care whatI think. By the way, I did use to think: 'I just want to be wanted, envied and applauded.”

A character like this can be great, can be very funny! What is sad is that more and more real women are displaying this same behavior. On other hand, I do believe we should be valued by the beauty of our bodies.

Why not? It is good to be admired; I feel good. But having this as the only objective in life is poor and dangerous. I think the key is to find a good equilibrium between form and content.

In a recent interview you talked about the importance of art as a tool to change society. How do you think this can change VAW?

We use to have access to stories about VAW [Violence Against Women] through the news. It was informative, but also distant.

Art can help us by giving a closer look to the problem. Watching a movie about a little girl who sees her dad hit her mum can help you. You identify yourself with that character. You put yourself in the little girl’s place, or in the mother’s place, or even in the father’s place.

Anyway, what I’m trying to say is that theatre, a soap opera, a book, a picture, or any other form of artistic expression can raise awareness in a very strong way to an issue that people did not see before, or never paid attention to, by touching their feelings.

Also, I think mothers should be more careful by educating their sons. Why must a daughter help her mum with all the house work while the son passes all his afternoon playing video games? Doesn't it sound silly? Ask your daughter about it!

A big kiss to all of you