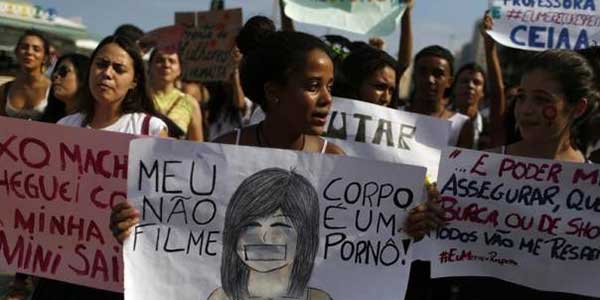 Brazil, where a woman is killed every two hours, is imposing tougher punishments on those who murder women and girls, as part of a government bid to stem a rise in gender killings.

President Dilma Rousseff said the new law gave a legal definition to the crime of femicide - the killing of a woman by a man because of her gender - and set out jail sentences of 12 to 30 years for convicted offenders.

The law, signed by Rousseff on Monday, also includes longer jail terms for crimes committed against pregnant women, girls under 14, women over 60 and people with disabilities.

Brazil joins 15 other Latin American countries which have brought in laws against femicide in recent years.

"This law typifies femicide as a grave crime and identifies it as a specific crime against women. It's a way to talk about this problem, make it visible by giving it a name and increasing sanctions for this crime," said Nadine Gasman, head of the agency United Nations Women in Brazil.

The number of women murdered in Brazil rose by 230 percent from 1980 to 2010, government figures show.

An average of 4,500 women are killed in the country every year, Gasman said.

"Femicide is part of the big increase in violence in general in Brazil. The underlying causes are discrimination against women and inequality, and in Brazil black women are the poorest and the most discriminated against," she said.

More research is needed to better understand the reasons for the big increase in gender killings in Brazil, Gasman said.

Femicide is a widespread problem across Latin America.

More than half the 25 countries with the highest femicide rates are in the Americas, according to a 2012 report by the Small Arms Survey, an independent research project in Geneva, based on 2004 to 2009 figures.

It is common for victims of femicide to have a long history of domestic violence and the perpetrators are often the victims' current or former partners, family members or friends, U.N. Women says.

"Our experience in the region and in Brazil shows femicide is part of a cycle of violence and it's the most intense form of violence ... that becomes graver and graver. It doesn't come out of the blue," Gasman said.

Femicide also stems from a macho culture that tends to condone violence against women and blames women for it, which in turn leads to low prosecution rates for gender-related crimes.

"This is a further step in Brazil's legislation in the fight against sexism that kills women daily in our country," Brazilian congresswoman Maria do Rosario said on her Facebook page, after the femicide law was introduced.

The challenge now is to ensure that the law is put into practice and that police, prosecutors and forensic experts are trained in how to investigate cases of femicide.

"It's always a challenge implementing laws but having this law makes it compulsory to investigate this crime with a gender perspective," Gasman said.