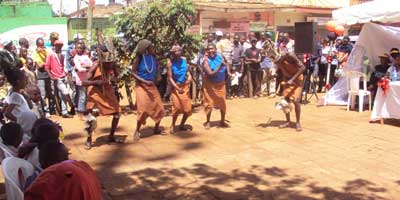 Traditional dancers entertaining the crowd and helping us in our workshops to campaign against Genital Mutilation. Photo: Compassion CBO.

In accordance with its vision and mission, Compassion Community Based Organization (CBO) has some ongoing activities in the county of Tharaka Nithi in Kenya.

Situated east of Mount Kenya along Nairobi-Embu-Meru tarmac road, Tharaka Nithi has a population of approximately 150,000 people. Its roads and infrastructure are very poor, rendering communication difficult. It is a semi-arid area with infrequent rain patterns that result in severe drought, causing famine.

The soils are rocky, hilly, and sandy and cannot support any meaningful food crop growth; thus, contributing to the current high levels of poverty.

Poverty often leads women into prostitution as they regard it an easy and quick means of survival. Prostitution has been linked to HIV/AIDS infection, which stands at a rate of 5.7 percent. It contributes to the death of mainly middle aged people who usually leave behind many helpless children as orphans at the care and support of their poor, weak, and aged grandparents.

The grandparents themselves are often dependent on their sons, daughters, brothers, or sisters who often have very little means at their disposal due to the general poverty experienced in the Tharaka Area.

There is a very high primary school dropout rate standing at 21.6 per cent and 19.7 percent for boys and girls respectively.

About 3,350 are currently not in school because they lack food, funds for building schools, school uniforms and fees, shelter, and medical care. These children roam around mushrooming towns and market places in search of means of survival.

Therefore, they are exposed to all sorts of child abuse such as child labour and rape. Young girls have been forced to be child mothers while boys become shamba attendants (gardeners) –  with some being exposed to drug and alcohol abuse.

In Tharaka, many communities are very conservative and still hold onto outdated cultural practices such as kirimo, where all boys below the age of 12 years are said to be swallowed by a mystical dragon that would later spit them out.

Thereafter, they would undergo a mass circumcision using a single, sterilized knife and some witchcraft practices, thus exposing these boys to HIV/AIDS infection. The boys allowed to be circumcised are 7-12 years old.

This rite exposes them to serious beatings that may cause death to some. These boys are dropping out of school to become shamba boys.

That is the main reason why the current primary school dropout rate for boys stands at 21.6 per cent.

Female circumcision – or female genital mutilation as it is commonly known, is forced upon girls aged 7-12 years old. It is not voluntary, but a cultural 'norm'.

However, some of the girls have shunned it –  but, this is only about 15 per cent of the “eligible” girls for circumcision. Once a girl has undergone FGM, she is regarded as an adult and can enter into early marriage. That causes the high dropout rate of girls standing at 19.7 per cent.

There are many health issues caused by FGM such as HIV/AIDS infection, tetanus infection damage of adjoining organs, blockage of urethra causing urine retention, recurrent urinary tract infections, and increased risk of maternal and high chances of death at childbirth.

Mary (not her real name) is a victim of genital mutilation.

Christine was born on 1st January 2004; she joined Compassion Rescue Centre in 2007 and her dream is to become a nurse.

She was a victim of genital mutilation under her guardian (parent) during the school holiday of April 2011. Taken to a remote village from the slum of Githogoro to visit her grandparents;  little did she know that she was to be taken to undergo the ritual of FGM.

Not until she reported back to our rescue centre did we notice that she was unable to concentrate in class; we noticed she was traumatized and she was taken for a counseling session –  only to reveal what she went through.

Workshops to Raise Awarenss About FGM

Many young girls are ferried from the slum areas and taken back into the village for the FGM ritual.

A lot of communities in Kenya still hold and adhere to the tradition of FGM. The vice is strong in remote rural areas and in the slums, where poverty and illiteracy is high.

Compassion CBO holds workshops both in the rural areas and slums to educate the communities to abandon FGM. The workshops are held in schools and other public institutions. 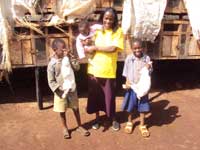 Our mission is to identify these OVC’S (orphans and vulnerable children), plus the disadvantaged girls and women, with a view of providing emotional and practical support.

These children require food, clothing, medical care, and shelter in order to have fulfilled lives and to contribute meaningfully to the area's socio-economic developments.

As for the school-going children, they require school uniforms, fees, and personal effects. These are but short-term measures.

Provision of (piped) water would eliminate poverty which is the major contributor of all these problems. With piped water, Tharaka can also be easily drilled to provide water.

The area also requires proper infrastructure for easy movement and electricity for domestic use, plus institutions to provide basic health care to all.

Compassion CBO works in liaison with the youth, gender, and children’s officers based at Marimanti –  who is currently employed by the Kenya government. The officers assist us in getting to meet those in need in the region.

Tunyai Children Centre (TCC) is an institution at Tunyai market in Tharaka South, where our volunteers sometimes work. It is a community-based organization which was founded in 1986 and deals with orphans.

It provides care, support, and protection to 189 OVCs, which include 76 in local primary schools, 42 in high schools, colleges and universities, and 71 who are centered at the institution and the centre to learn, eat and play.

The plight of their poor parents is also our concern.

We are looking for partners to help us in our campaign to deal with these problems.

CBO’s headquarters is in Kathwana in South Tharaka.

At the moment, most of its activities are centered at Chuka and Marimanti in Nithi and Tharaka respectively.