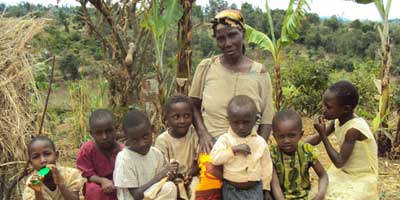 Beatrice Grandma who has abandoned the FGM culture and refused to allow her seven grandchildren to undergo FGM. 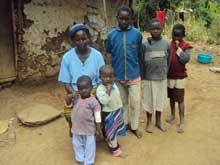 "I have five children, 4 girls and one boy. Our culture strongly believes in FGM. For all my four girls, it was a must that they should undergo FGM.

Now I have changed my mind after Compassion volunteers visited my home and taught me the risks involved in FGM.

[Normally,] due to poverty we take our girls for FGM and prepare them for marriage in exchange of cows."

Culturally, FGM is coveted as a 'rite of passage' from childhood to adulthood and every tribe has its own ways of performing the practices. 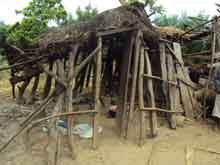 A kitchen in Tharaka Nithi - a poverty-stricken region.Despite the enactment of the prohibition of Female Genital Mutilation Act, 20112, the practice is very alive in Tharaka Districts of Nithi County in Kenya – mostly South District (Igambangombe) and in both North and South Tharaka Districts. Girls as young as 7 years old of age are circumcised.

In those areas, the culture is more important for shunning circumcision is a sure way to social rejection.

Girls escape FGM, only at the risk of being beaten and abused – especially by the elders.

Note - sometimes, when the parents who are against FGM are away from their homes. girls are abducted and circumcised secretly.

Parents believe that the cut reduces libido in girls and is therefore good for morality.

Uncircumcised girls attract stigma even at school. FGM persists because the girls who have undergone the ‘cut’ drop out of school and are culturally coveted for early marriages and early pregnancy.

Most of those girls who are lucky to return to school after the ‘cut’ are unable to concentrate in school, for they feel that they are now adults.

This encourages school drop-out for girls - the drop-out rate currently stands at 19.7% in Tharaka North and South 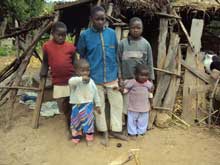 A house where the family shares with a Cow. Many people in Tharaka Nithi share the same roof with domestic animals.The FGM ceremony is carried out and 'celebrated' every December. These days, the cut is done secretly for fear of one being reprimanded.3

The girls who are expected to undergo the cut are usually brought to women who will mind, mentor them. and even take care of them and of their wounds. These are the ones who will stand by them during the cut ceremony.

On the cut day, the initiates will be taken through a courage-inducing session, where they will be warned not to shed a tear, scream, and blink or move their legs during the ordeal for if they would, they would be labeled as cowards thus bringing shame to their clan and their families.

Immediately after cutting, the girls’ chaperones place a mixture of powder and smashed herbs on the wound.

The girls are taken to their homesteads by their chaperones who are expected to take care of them until their wounds are healed. If one happens to die because of bleeding, she would be buried secretly and her fate would be known when the “ceremony of passing out will be conducted”. This ceremony, also known as mambura ma guturia ngutu in Kimeru language, is the day the circumcised girls come out of seclusion.

By the time they are physically healed, about one month later, several suitors will have visited their homes, asking for a hand in marriage, and they have no choice whether to get married or not; their parents determine their fate.

No to FGM - Bribing the Cutter

The advocacy against FGM has prompted mothers opposed to it to bribe circumcisers so that they symbolically perform the cut on their girls. Here the circumciser symbolically initiates the girls so that blood could be seen to keep the cultural die-hards into believing that a circumcision has taken place. 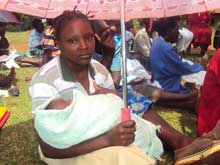 Cathrene listen attentively, holding her 2 year-old child. She is among many women who attended our campaign against FGM seminar in Igambangombe in Tharaka-Nithithi.However, currently many churches in the city have set up a different model of performing a rite of passage for teenage girls.

Institutions that have the new style include: Queen of Apostles Seminary and PCEA Kikuyu Hospital.

The initiates are usually the teenagers who have sat for their Kenya Certificate of Primary Education (KCSE) that year. The programmes are inter-denominational and hold no ethnic barrier.

The girls undergo an alternative 'rite of passage' with a symbolic 'cut' to initiate them into womanhood.

First they are are counseled, and taken through lessons on puberty, sexuality, womanhood and chastity, and so on. The 'cut' is performed on the Saturday that precedes the graduation ceremony.

The symbolic cut for girls entails tying a ribbon on each of the girls’ thighs. The initiate is then asked to vow that she will safeguard her virginity till marriage and will be responsible for her body.

Thereafter, the ribbon is cut to symbolize that she has been initiated into adulthood.

The lessons taught cover areas on:

Our Volunteers walk in to a homestead of Mworania in our campaign against FGM in Igambangombe in Tharaka- Nithi County.At the end of the session, the initiates are collected by their parents in a splendid ceremony, where the parents are encouraged to continue teaching their children in their homes and communities, where they are taught about their respective cultures and customs.

Follow-up programmes are held up in April where the initiates are divided up in groups to be addressed by a woman parent of their choice.

If need be, subsequent seminars are held in the holidays until the girls sit for their KCSE.

“Gender equality is more than a goal in itself. It is a precondition for meeting the challenge of reducing poverty, promoting sustainable development. and building good governance, “

The promises made by Jubilee Government (the current government in office) unfortunately do not expeditiously address girls' education for the purpose of achieving gender equality as per UN status.

The Jubilee government’s promises on education are as follows:

It is our government’s responsibility to provide necessary measures to control and stop FGM by: 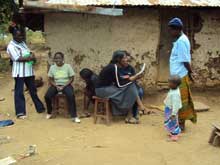 Our Field Officers go house to house explaining risks and dangers of FGM in Tharaka part of Tharaka Nithi County.For the purpose of achieving gender equality, there is a need to remove the deep-rooted obstacles as a power structure that does not promote gender equality such as discriminatory laws, customary practices, and institutional processes which undermine gender opportunities and outcomes in education.

For instance: do away with text books which depict women as housewives, secretaries, receptionists etc. and men as scientists and intellectuals who are privileged to teach such subjects as maths, chemistry, physics, etc. and allow and encourage women to teach Christian Religious Education (C.R.E.), languages, geography, history, etc.

Integration of gender in all levels of education is vital from early childhood to higher education. Political promises that depict gender blindness must be ignored. Let there be strategies and promises that strengthen our education sector to portray gender perspectives for it’s a fulfillment of our fundamental right.

Education is the key to our development.

Gender equality in education must be delivered in order to enhance national health as female education is one of strategies of breaking cultural and inter-generational poverty, and hence, builds a sound foundation for solving many problems that usually confront us.

At around 5 am, the girls are taken to a nearby stream to take a bath whose purpose was to numb the clitoris to reduce pain.

Thereafter, the girls would be driven like sheep to the ceremonial site where they would sit in a circle while naked.

Their chaperones would be with them. The women carry lesos (an African garment that is wrapped) that will be used to clothe the girl once they are circumcised.

Each girl is then held tightly by two women who force her legs wide apart, to allow the circumciser to do the cut - using one unsterilized knife to cut them all. The girl's mother and other women sing and dance around her.

These days, there is no singing nor dancing as the cut is done secretly for fear of one being reprimanded.

Popularly referred to as Female Genital Mutilation (FGM) Act Of 2011, the Act outlines FGM to be:

3 Offences Related to Carrying out FGM