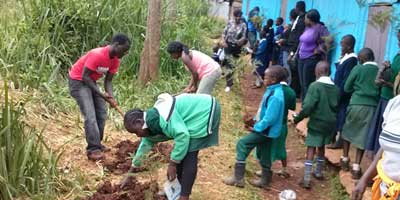 “I saw my friend and schoolmates shot. I don’t know how long I stayed under the cupboard, but a brave policeman rescued me and took me downstairs. It was like being in a horror movie.”

Compassion CBO is based within a three mile radius of the Westgate Mall within Nairobi City.

Our daily work is focussed on the eradicating poverty and promoting education among the people living in harsh conditions in the slums of Nairobi and other rural areas.

On 21st September 2013 at around 12:55 pm, Westgate Mall in Westland, Nairobi, Kenya came under scathing attack by Al-Shabaab terrorists.

The mall was packed with children and women during the attack, which resulted in 67 people dead, among them children and women. Mostly, when a disaster of this kind happens, the end result is that women and children suffer most.

The women and children were directly affected: some lost their lives in the attack and others were seriously injured. Some children lost their loving fathers and mothers the same day, leaving them orphans. Women lost their husbands who were the breadwinners.

This time, the women and children who were affected needed our moral support and encouragement. Kenyans united during and after the attack, and many Kenyans donated over 7,000 pints of blood.

Some women brought water, food, and other drinks to soldiers and other rescue teams throughout the time. Kenyans from all walks of life rallied behind the “We Are One” campaign and donated cash, gave in-kind contributions, and provided the most important capital needed at the same time in the form of blood donation.

Many children – whether present at the mall or not, have yet to come to terms with the terror attack.

Despite every challenge our government faces, our security forces should not allow this to happen. Never again. No child should die from a terrorist bullet. However, the spirit has kept us together and alive. We shall overcome this and children will rise and be brave enough to face future challenges.

The Kenyan spirit of togetherness and victory will not be deterred by a bunch of cowards.

We say, rest in peace. 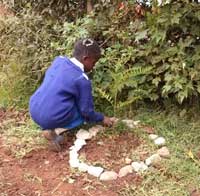 The children at Compassion CBO planted 50 trees; the trees will bring healing to them and they will remember other children and friends who lost their lives in the tragedy.

The planting of trees was originally to help conserve the environment, but it happened the same time when the attack occurred, so they planted them in remembrance of the children and women who lost their lives.

Compassion CBO encouraged its staff to give blood to save lives and volunteer when needed to support those who were directly or indirectly affected.

Ruhila Adatia Sood was a graduate of Rhodes university in Grahams town in South Africa. She loved reading listening to music and watching TV. She will be remembered for among other things, her bubbly voice when reading entertainment news on Kiss TV.

Her sisters described her as a go-getter. She was the last-born in her family of four girls and was married to Mr. Ketan Sood in January last year; she was six months pregnant with their first child. The radio personality was on the roof top parking lot of the Westgate Mall where she was hosting a cooking competition for children at the time of the terrorist attack.

For those who have been rendered orphans, widows, and childless, their memory never fades, a quote from the Quran:

“Surely those who believe (Muslims), and those who are Jews, and the Christians and the Sabians, whoever believes in God and in the last day and does good, they shall have their reward from their lord, and there is no fear for them, nor shall they grieve." (Chapter 2 verse 62)

Juliet Sandra. age 9. was shopping with an uncle. She was on the first floor when she heard six gunshots. Gunmen confronted them and told everybody to put up their hands. Then they started shooting in every direction and she saw people falling after being shot.

“We joined a mob running down stairs - people were dropping all over. I don’t know how we survived. Now I believe in miracles.”

Faith Muiruri, age 10, was taking part in a cooking competition on the top of the mall when gunmen entered and started shooting. She lay down and crawled into a cupboard where she hid.

“I saw my friend and school mates shot. I don’t know how long I stayed under the cupboard, but a brave policeman rescued me and took me down stairs. It was like being in a horror movie.”

Ibrahim Sharif, age 9, went to the mall a happy boy because his dad was to buy him a present for passing his science exam. They bought [the present] and left the mall. He was glowing with joy until:

“While at Westgate we heard gunshots, and I saw someone getting shot. Once we got out of the mall we ran for our lives. I will never forget what I saw.”

Jamleck Njiru, 10, was not at Westgate, but he says he is disturbed by the horrific images he saw on television and in the newspapers. He says he has been having bad dreams where he sees himself inside Westgate.

He says, “I cannot imagine what the children and adults who were there went through,”

Over the many years, the poor souls have been blowing up people and places; apart from the anger and resentment, life goes back to normal in all the countries where they have meted out their cheap, foolish, and narrow-minded activities, what have they changed?

America has remained intact after the 9/11 attacks. Kenya is totally intact after the August 7, 1998 blast except for the poor individuals who bear the scars of the devilish act. Iraq, UK, Uganda, Nigeria, Algeria, etc., have never changed one iota.

So, I beg to ask those who train and feed those poor boys and girls with such myopic ideologies: in the long run, can you quantify anything good that has changed in your favor?

Compassion CBO is looking forward to mobilizing 3,000 girls for a three-week seminar in Tharaka Nithi; these girls will be rescued from FGM and be initiated to adulthood through a symbolic ceremony - breaking the Red Ribbon.

The activity is scheduled to take place between 1st December to 20th December 2013.

This will be possible through support of well-wishers. At the end of the seminar, girls will be given sanitary pads. We are looking forward to raising Ksh 300,000 for the occasion.

We are appealing for friends of good will to help us raise the funds.