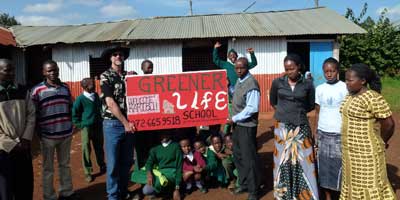 Little Gifts that Have Made a Big Difference – Part 1


The Gift of Computer Lessons

Back in 2005, the year I struggled so much to start an educational centre for children, was when a friend of mine whispered to me of a white man in Runda Estate, looking for pastors to train in computer knowledge. I thought that must be a very rich man to sponsor all those people. My friend told me about the house where the man was living and that a number of pastors had met there once, and introductions were made with them. I just said I will go and see what happens.

Evanson in classSo I went on a Thursday to a gate well-guarded. The security men asked me few questions and then I was allowed in. I found a class had started, but when I knocked on the door, a tall man opened it for me and told me he is not taking more students because the room was small and he had converted the corridor of the house as a class because he himself was not working and had no money to rent a place for a big school, but that he was using the resources at his disposal to change lives.

He told me he wanted 12 students to whom he would give the exam after one month; then he would keep six students of those who passed – they would be the ones he would sponsor. Then each of the six were to teach another six. When we took the exam, I was among the six he considered.

Evanson receives certificate from MartyEvery Thursday, we had two hours class at the house where he lived with his family. He risked so much to have us around the house, since his wife was working with American Embassy. Her only daughter was young at the time.

On my side, I had to wisely balance my teaching at the Compassion CBO Children's Centre with the computer lessons.

We were taught for free since none of the six students could afford to pay for the course.

After one year, each student was given two desktop computers and each was to teach six students 'in kind', giving back to the community; that was the internship part of it.

I enjoyed training others, and at graduation time we were 36 students.

After school, I had to teach computer classes from 5:00 p.m. to 9:30 p.m. I managed to teach computer lessons to many students, which became one of the computer schools in Githogo slum, and my two other classmates – Mary and Geofrey, each had his or her own school in a rented coop of 10 by 10 feet. All of us lived in the slum.

Many people in the slum did not know what a computer looked like: just a person pressing a key of the keyboard, disconnected from a computer, will tell the whole village he knows how to use a computer and he has touched a computer. For them, moving the mouse cursor was like a pilot flying an aeroplane.

I remember people would call each other to come and see a computer.

Marty left for south Africa in 2007 and we continued with our schools. However, when the bypass road was constructed in 2009, it happened that the room where I was teaching was demolished.

Help from a Soccer Club

Good news arrived: a young man, the leader of a soccer club, happened to be one of my students - and he sold the idea of the computer school to the soccer club, and so they started offering computer lessons and internet services in the slum.

That is the place where I still do most of Compassion CBO's work, because they have an electricity connection. We have no power at the school.

I started working part-time to raise money to keep the school and projects running, by repairing and maintaining the computers, a life time skill I learned from Marty's school of electronics.

Evanson (second from right) with Marty and family, in the small room where Evanson taught computer lessons.When Marty came back in 2009, he found the Compassion's Children's Centre and the farming of maize I was working on to support children and keep the school running; he donated a laptop to me to help me in our work. He donated another laptop for me in 2012 to teach pupils in the school computer lessons.

During Christmas, Marty and his family gave money and cereals to poor families in the slum of Githogoro.

His wife would, despite all odds, walk in pee strewn, squeezed corridors of the Githogoro slum to give those small containers of mixed cereals - with no security following her. Those were acts that made me think more about acts of kindness.

I opened the first photocopying facility in the slum, and also offered internet services using the Pentium 2 Computer from 2010 to 2012. When the computer broke down, I started using the laptop which Marty had given me to keep the work going on.

In 2013, I changed from teaching the public to teaching pupils in the school.

Salim and Alex receive school clothes from Marty.At Compassion CBO's Centre, Marty has sponsored two pupils, one now in Form 1 and another in Class 8, waiting to join secondary school next year. He made us a school sign post and bought us some text books. He also bought school uniforms for some pupils, and gave a little money for our chicken project in 2014

Last year, the school had arrears of $700 and when he asked me what was our one pressing need, I told him rent arrears. Although he really wanted to give me money for the chicken project which had stagnated for almost a year, he cleared the school debt in January 2015.

In January we started without debt - although in March and April, as I write, we have not beeen able to raise KShs 20000 for rent.

Ever since I have known Marty, from back in 2005, his great desire to support and help improve the lives of many poor students and needy children has been immense, despite him not having any job for all those years, but from his little savings, he has touched lives. One of my students I taught is Ann, now a teacher at the Compassion CBO Children's Centre (Greener Life School).

Ann learnt computer lessons in 2010, before she joined secondary school, and now she is volunteering with Compassion CBO, before joining university next year. She teaches classes 4 and 5. Another lady is Esther, who works as a cashier in a local supermarket and she earns $700 per month.

As we celebrate 10 years of Compassion CBO, we think with gratitude of Professor Marty for his little contribution that has made a big different. Its the little things that we do in life that make such a difference.