Teaching Girls in Githogoro Slum About the Dangers of FGM 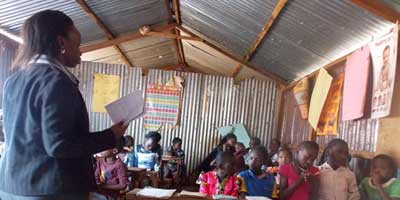 By Linnet Griffith-Jones in Nairobi, interning with Compassion CBO

This week at Compassion CBO, we held our first Anti-FGM seminar of the year. We hold several every year in both Githogoro slum (Nairobi) and in Tharaka Nithi, in the east of Kenya. They are held during the school holidays to ensure maximum attendance but the ones in Nairobi are shorter than the one we will be holding in a couple of weeks in Tharaka Nithi.

The seminar in Githogoro was timed to make sure it was before the girls go back to their villages for the holidays; it is when they go back to rural homes that they are most at risk. This was the first Anti-FGM seminar I had attended.

More Girls Than We Expected!

The whole day event was meant to begin at 10 a.m. but this is Africa so it was around 11 by the time most people had arrived. Evanson [founder of Compassion CBO] was expecting 50 girls aged from 8 to 15 (the age most at risk) from the slums.

However, we ended up with about 60 girls - with the youngest being 6 years old, which was great; children from the wider community came along, as well as those from Compassion's Greener Life school.

Brothers Were Keen, Too

Another great development was that some of the girls were accompanied by their brothers. This time, the boys were left out of the main lecture/discussion parts of the day because they weren't expected and therefore, the day wasn't set up to include them. Next time we are going to make sure they can be included, either with the girls or taught at the same time but on the part they can play to end FGM; the boys were really, really keen to take part. It was a shame not to include them this time but their enthusiasm was amazing to witness.

Men and Boys Need to be Involved

The thing with FGM is that men and boys must be involved in ending it as really, as far as I can see, while it is girls who have to undergo the horrendous act, FGM is for the 'benefit' of men and, in a country like Kenya where many girls are raised solely to be mothers and children, the argument that you won't get married if you don't subject yourself to being 'cut' can be horribly persuasive.

Information to Protect the Girls

So back to the day: it began with a discussion run by Phyllis, a Compassion CBO board member who I've met a couple of times before. She really thoroughly covered a huge amount of information in a way that was designed to make sure the girls were sure to grasp it. They also sat studiously taking notes about the arguments people use in support of FGM, the horrendous complications and risks, and some of the terms used.

The girls were armed with the information that would make it possible for them to argue against anyone trying to talk them into being subject to FGM. She also made sure that they knew where to turn to if they needed help, making sure that everyone knew that FGM is illegal in Kenya and which chief, police station etc. was closest.

Then it was my turn to talk to them about how we don't practise FGM in 'western' cultures and why we see it as so awful. Mostly I just banged on about women's ownership of our own bodies.

Really not sure how much difference I made but from an earlier conversation with one of the Greener Life teachers, Caleb, who had no idea that Wazungu have no tradition of FGM, I hope that I made it clear that FGM is not as ubiquitous as some of these girls may have thought.

Then came the fun bit: traditional Kikuyu dancers! The Karukira Mwomboko Dancers came with the dual task of entertainment and reinforcing the message of the day. Singing in a combination of Swahili and Kikuyu and dressed in traditional costumes, the five dancers sing about social issues.

It is a great way to engage with people, especially children (the boys came to watch, too) who can get a little tired of discussions after a while.

The group say that performances are a fantastic way to get a captive audience; people will initially gather to see the dancing but stay and hear the message as well. Obviously the lyrics of the songs were a mystery to me, but it was clear that everyone was enthralled.

In the doorway some of the boys danced along and the girls in the classroom climbed over desks to get the best view possible.

Watch our video of the Traditional Karukira Mwomboko Dancers at the seminar.

After the dancing, we all lunched on bread and soda - a great treat for many of the girls of the slums.

The Link Between FGM and HIV/AIDS

Afterwards, Phyllis was back in charge - combining the anti-FGM message with information on HIV/AIDS. The two issues are inextricably linked. The 'cutter' who performs FGM will use the same razor blade for a whole group of girls and that Prevention of Mother-to-Child (PMTC) programmes were only introduced to Kenya about 15 years ago, meaning that some of the older girls undergoing FGM could possibly have been infected by their mothers as babies and therefore could unwittingly infect their peers because of the unsafe practice of FGM.

The seminar finished with some more dancing and all the girls who came were given certificates to take home saying that they had attended the seminar - another piece of evidence for them to give anyone who tries to pressure them into FGM, to show that they know better!

That's all for now, but in just over a week I am heading east to see one of Compassion's week-long residential anti-FGM seminars, so tune in next time for news on that!

Linnet Griffith-Jones is a graduate in Politics from Lancaster University and has an MSc in International Politics from Trinity College, Dublin.

Linnet is currently carrying out an internship with Compassion CBO in Nairobi.