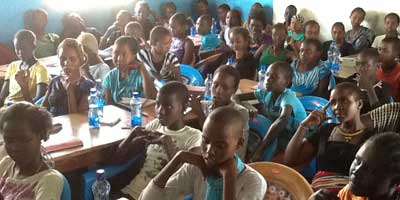 The camp was held during school holidays at Lorubae Primary Boarding School.

Female Genital Mutilation (FGM) and child marriage are widely practiced in this community.

However, we’re pleased to report that women and girls are openly voicing their opposition to these harmful traditions that marginalise girls.

The 4-day educational camp curriculum is comprised of the following subjects:

The workshop facilitators are local doctors, nurses and social workers who are life-long Samburu residents who care deeply about the status of girls and women in their communities. They also dedicate their time and expertise year-round as volunteers and mentors for the girls.

Asha pictured on the left, wearing green.Two of the camp participants were Asha and Serena, whose education is fully sponsored by Pastoralist Child Foundation.

Both young ladies are looking forward to attaining higher degrees and returning to their communities to improve the quality of life.

“My name is Asha. I’d like to be lawyer and want to go back to my community to improve their life standards and bring justice to them.” - Asha

The campers were very inspired by Asha and Serena and many of them hope to be sponsored too.

Dr. Kilimo speaking at the campOur camp was graced with a 2-hour visit by Dr. Linah Jebii Kilimo, Board Chairperson of Kenya’s Anti-FGM Parastatal. Dr. Kilimo spoke to the girls and assured them that the Kenyan government is making aggressive efforts to enforce Anti-FGM laws.

It was important for the girls to hear from a high level government representative that FGM is absolutely illegal, harmful and won’t be tolerated.

She strongly advised the girls to reject FGM and child marriage, and to report known and suspected cases to the proper authorities.

Dr. Kilimo (third from left)Our organisation’s co-founders, Sayydah Garrett and Samuel Siriria Leadismo met with Dr. Kilimo in Nairobi in July. They had requested a meeting to inform her of Pastoralist Child Foundation’s efforts to eradicate FGM and child marriage, and to garner her support for their efforts.

Dr. Kilimo was very pleased with our work and asked us to keep her informed. As a matter of fact, Samuel received an urgent phone call from Dr. Kilimo in September asking him to locate a safe haven for a young girl whose parents intended to have her circumcised.

Receiving certificatesThe impact of the educational camp is far-reaching.

Girls make the commitment to share what they learn with their peers, relatives, and teachers.

The workshops are interactive where facilitators encourage girls to speak openly and honestly about their beliefs and practices.

This is a new concept for many girls because they’re members of a patriarchal society where their voices and opinions aren’t heard or respected.

On the last day of camp we had a celebratory graduation ceremony complete with songs, dance, theater and delicious food! Every girl received a graduation certificate and turquoise Pastoralist Child Foundation T-shirt.

Among the guests were proud family and friends, local dignitaries, law enforcement, teachers, and religious leaders. Everyone agreed the camp was a huge success and asked, “When’s the next camp?”

Health and Sanitation Workshop for Prevention of Ebola

Our next camp is scheduled for November 30 – December 4, 2014. Sixty new girls will attend.

The health & sanitation workshop will be facilitated by a WASH-certified (water, sanitation and hygiene) doctor who will teach preventive measures against Ebola.