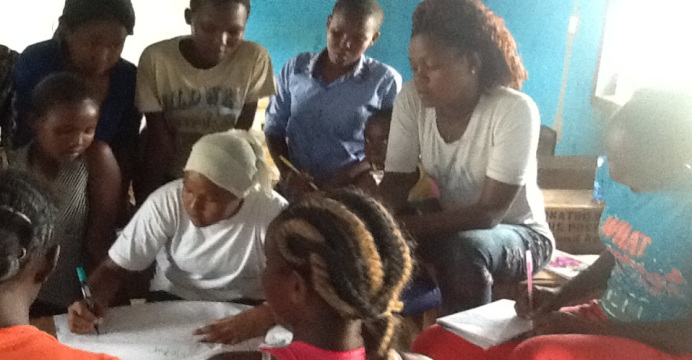 The Pastoralist Child Foundation is a grassroots organization based in Samburu, Kenya. Samburu people practice a nomadic a culture that is as enduring as it is exciting. While the Samburu tribe represents everything that is authentic about Kenya, it also has a share of misgivings. Most notable is the harmful cultural practice of Female Genital Mutilation (FGM). The pastoralist child foundation implements program that aim to prevent FGM and eventually eradicate FGM, early forced marriages and other harmful practices within the Samburu and Maasai community. The scope of the Pastoralist Child Foundation’s advocacy includes the prevention of HIV, teenage pregnancy, child, early and forced marriage, resisting violence, reproductive health and sanitation and hygiene. The organization’s main tool for confronting these issues is the involvement of the community in educational workshops through which they disseminate comprehensive sexuality education information. The foundation also sponsors girls to enroll into school at the primary and secondary level and ensuring they have all basic needs such as sanitary towels to stay in school. The organization is co-founded by Sayyah Garret from America and Samuel Siriria Leadismo Co-founder and Director.

The Pastoralist Child Foundation has devised innovative and comprehensive approaches to prevent FGM in Samburu not only in the short-term, but also in the long-term. The organization’s approach has seen it widen the scope of its advocacy. It engages a broader range of stakeholders, including girls, who are victims of FGM, at risk of – health complications, some leading to death, early and forced marriage making a girl unable to finish her education and contribute to the economy. Mothers are engaged as they typically make the crucial decision that dictates when a girl is ready for the cut.

Through the active involvement of different stakeholders, the Pastoralist Child Foundation has managed to gain the broad support of the whole Samburu and maasai communities. The community understands that the Pastoralist Child Foundation is not out to change their beautiful culture, but only rectify the negative elements within the culture such as FGM and child, early and forced marriage.

While a broad range of issues are addressed at the Pastoralist Child Foundation’s workshops, FGM remains a central part of its comprehensive sexuality education program. FGM in Samburu is usually a precursor to early marriages, gender based violence and exposure to HIV. FGM therefore not only exposes Samburu girls to HIV infection (through sharing unsterilized blades), but also grossly undermines the rights and ability of women and girls to exercise their bodily autonomy and make informed choices about their body, health and well-being.

Approximately 140 million women and girls around the world have suffered the harmful practice while 3 million girls are at risk of FGM in the African continent, the 2014 update of the Population Reference Bureau shows. The situation in Africa is further exacerbated by the fact that 39 percent of child, early and forced marriages happen in the continent. In Kenya 27% of women and girls have undergone FGM, with prevalence within the Samburu and Masaai communities approximately 78% according to UNICEF What paints a grimmer picture than these terrifying statistics are the painful personal accounts of girls at Pastoralist Child Foundation’s workshops.

The information that Samburu girls get at Pastoralist Child Foundation’s educational camps is crucial in providing them with the instruction, confidence and self-esteem required to reclaim control of their own sexuality and make decisions about their future. . Through comprehensive sexuality education, Samburu girls now have the power to protect their future, expressed through girls like Sara Lereesh whose dream is to become a lawyer for her to pursue justice for her community.

Comprehensive sexuality education should be part of quality education and curriculums should provide information that enables adolescents to make informed choices regarding their sexuality, how to handle challenges during adolescence and puberty and plan their lives. The information provided should be scientific and evidence based. It should also reinforce gender equality, respect for human rights and should be delivered by individuals trained on the importance of respect for value individual systems.

Young people, proven to be effective champions of change together with various teams working on sexual and reproductive health and rights advocacy have led campaigns advocacy campaigns, widespread across various levels of government and at the UN for the inclusion of comprehensive sexuality education in schools. A few milestones have been achieved, including the East and South Africa Ministerial commitment on Comprehensive Sexuality Education as well as various country level policies on the provision of life skills education and sex education through Education and Health ministries.

Young people, proven to be effective champions of change together with various teams working on sexual and reproductive health and rights advocacy have led campaigns advocacy campaigns, widespread across various levels of government and at the UN for the inclusion of comprehensive sexuality education in schools. A few milestones have been achieved, including the East and South Africa Ministerial commitment on Comprehensive Sexuality Education as well as various country level policies on the provision of life skills education and sex education through Education and Health ministries.

Ironically, one of the barriers to accessing youth friendly sexual health services in Africa is parents. The Pastoralist Child Foundation makes continual engagement of parents a crucial component of their comprehensive sexuality programs. The organization works with parents and engages young men to ensure that all stakeholders get the message and are oriented on girls’ human rights.

Finally, comprehensive sexuality education by the Pastoralist Child Foundation is conducted in an area that is afflicted with scarcity. As a result, girls often lack the privilege of accessing basic amenities such as sanitary towels. In line with the Pastoralist Child Foundation’s focus on sanitation, the organization invests in washable sanitary towels to ensure that these girls who can’t afford sanitary towels do so. This allows these girls stay in school without unnecessary disruptions to their education.