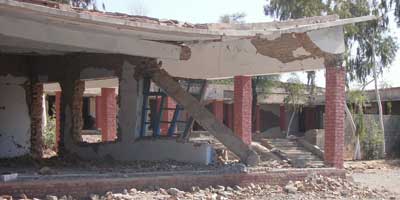 Report and photos by Sami Ullah, Programme Coordinator, SAWERA © - May 2014

Most girls in Pakistan have never been to school

FATAEducation is considered a primary development indicator and an important aspect of the Millennium Development Goals (MDG) to be achieved worldwide. We face potential obstacles to achieving this goal in remote areas, for which billions of dollars are spent on resources to better understand hurdles in mainstream human development and to furnish developmental approaches on the grassroots level.

We have seen firm efforts behind this objective internationally, regionally, and locally, but the situation is worse in Pakistan, and particularly in Federally Administrative Tribal Areas (FATA).

The United Nations Educational Scientific and Cultural Organization (UNESCO) revealed in a report issued on 10 November 2012, that Pakistan was at the bottom 10 of new country rankings for the education of poor females – stating that 62% of girls in Pakistan, aged between 7 to 15, have never spend time in a classroom.

Morever, the report stated that girls between ages of 17 to 22 spend one year in school. Almost two thirds of Pakistan’s poor girls have never been to school.

According to another report on 19th September 2013, it was revealed that 6.5 million children were not enrolled in primary level education and 2.7 not enrolled in secondary education. The literacy ratio is quite beyond low in Federally Administrative Tribal Areas (FATA) due to ongoing conflicts.

FATA is located near to the border area of Pakistan and Afghanistan and strategically emerged with a unique status since 9/11; an estimated total population of 4.1 million are affected – near to half are women, living most vulnerable lives under rigid tribal culture and forced impositions of militants operating widely in the restless zone of the country.

Nearly 500 schools destroyed in Pakistan, since war on terror broke out

Ghost School - Orakzai Agency, FATAIn 2001, when Pakistan became a US ally in the war against terror, a long lasting clash took place between armed forces and militants in the FATA. The militants expressed their intentions by targeting educational institutions where thousands of children became deprived of their basic right of education.

The female teachers and watchmen were not spared by the militants, either.

The indication behind the destruction is that institutions are used by security forces as a camp to target the militants. Another reason is that these schools taught secularism, which cannot be tolerated in Islamic society.

Only 2 per cent of girls in FATA receive an education

Primary School - Khyber Agency, FATABefore 2001, the FATA education ratio of males was 17%, and females, as low as 3% as compared to 59.6% in the rest of the country. The FATA low education status indicated itself the most primary underdeveloped part of the country.

In 2002, the education ratio decreased when FATA was globally declared the hub of militants. The militants blew up educational institutions, particularly girls' institutions.

Now the female education rate has decreased to 2% and the male ratio to 14%, in recent conflicts.

Poverty as a root cause

Research reveals unemployment caused a foremost obstacle in the tendency of tribal people towards education.

Parents engaged their children at an early age in marriage to make them become source of income for the family.

Society for Appraisal & Women Empowerment in Rural Areas (SAWERA) witnessed children doing shop keeping during after-school hours in the frontier region of Bannu near the border area of North Waziristan.

SAWERA learned that school children in Mohmand Agency – a part of FATA region, were going for jobs in various cities of Pakistan during summer vacation, while many government school children were doing work in fields and tailoring after school.

Frontier Region - Peshawar, FATAOne burning factor in the drop of school children ratio is corporal punishments in FATA. The government spends huge resources for capacity-building trainings for teachers, but consequently does not show the desired output.

Basically the teachers do not have modern teaching techniques to understand different levels of children's minds.

Due to inflation in the area, teachers also do other jobs with side teaching, and do not ensure full presence for teaching in the school. Thus, the learning tendency and concentration of the children is decreasing day-to-day, due to prevailing factors in the region.

There is no mechanism that exists to assess, monitor. and evaluate the performance of teachers. Political agents took interference in matters of postings, transfers, or appointments of staff and they also reserve their right to award scholarships to anyone he or she favors.

Ghost School - Bajour Agency, FATAIt’s been reliably confirmed that most of the schools exist on “paper”, not in a physical sense on the ground. These are called “Ghost Schools”, where these buildings are used by tribal Maliks as a business centre or personnel guest house.

The political agents constructed government institutions in allocated Malik lands. While a common person does not submit the complaint against the malfunction of employed staff or institution, launching a complaint means triggering enmity with the Mailk family. Then it could lead towards a tribal dispute due to lack of absorption of tolerance in the tribal society. The political administration also favours towards the Malik in a dispute decision rather than a common inhabitant.

Protection of schools is left to local tribal people

Tribal students attend a class while sitting on the debris of their school blown up by militants in Landi Kotal.When a girl’s primary school situated at Landi Kotal District Khyber Agency was blasted in 2010, one of my village children, seemingly terrified, asked me,

“Why did the Taliban destroy our school?”

I was silent for a moment to respond to her, but did not understand how to reply.

I did not want to say that Taliban are against the girl’s education in a religions pretext – I thought that might discourage her, but I told a lie that “[The] government is going to reconstruct the school soonbecause your school was getting old.”

The government did not provide adequate measures and adopt a suitable strategy to protect educational institutions in the tribal area. The protection responsibility was shouldered on to the tribal people despite thousands of armed forces. Consequently, local tribal people died in assaults by militants, while protecting the institutions.

It was also a challenge for militants. They often tried to blow up the school, but the dogs never did allow them to do so. One day, at the midnight time, militants engaged in setting explosive devices, but they left the devices and escaped – in fear of dogs biting them.

Early in the morning, the security forces contingent came and recovered the explosive devices from the place. Nowadays, the school is well-protected with the assistance of the hired dogs. Bakhtak Nawaz deserves the right of an award, by protecting the educational right of 300 girls.

His efforts were not recognized by educational department officials nor the political administration.

A potential question rose in this circumstances that if a local unarmed person could protect one school, why doesn't a functional government have capacity to do so?

Qualified professionals migrate out of the region

Teacher with weapon for protectionThe teachers kept weapons for their own security and protection in Orakzai Agency FATA region.

I always remembered village named Sepah, due to hearing the remarkable history of it. The village birthed eight engineers and 28 MBBS* doctors, while the village was excluded from electricity and road facilities since the country was established in 1947.

It has been learnt that after getting higher education and professional jobs, tribal people fled the area. Due to lack of basic facilities and protection, intellectuals migrate from the area.

Thus FATA people are deprived from their professional services in a continuous way.

*MBBS: Medicinae Baccalaureus, Baccalaureus Chirurgiae; a medical degree issue by the medical board of Pakistan to the doctors who’s completed their course in medical field.

Calling for Protection of Children in Pakistan, Especially the Tribal Regions - please sign