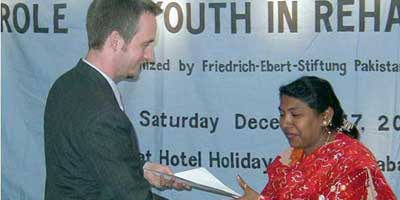 "First of all, I would like to extend my thanks to all team members of A Safe World for Women - especially Chris and Jen - for selecting Sewa Development Trust Sindh (SDTS) as a Field Partner in Pakistan and uploading a detailed page on SafeWorld webzine.

I started my work in early '90 when girls were not allowed to get an education in rural areas of Pakistan, especially as it was very difficult to speak or work for the rights of women and children.

To combat with that Taboo I started to work for the vulnerable and marginalized groups and communities for the rights and empowerment.

No doubt I have faced lot of hindrances and difficulties towards my work and fight against illiteracy, but it always encouraged me to provide more support to the voiceless women, socially, economically, and politically.

I am proud that my efforts are now being recognized in shape of Sewa Development Trust Sindh (SDTS); it is my identity and identity of the rural women of the area. Though SDTS, with its limited resources, is trying its best to cover and work with more families of other parts of Pakistan.

The day is not so far away when SDTS will be the voice of voiceless."

Speaking in December 2011, on the recent humanitarian flood disaster in Sindh, and the SDTS Flood Appeal, Ms Balouch says:

"No doubt charity for affected families is a source to save lives, and to work together for humanitarian support is a way to contribute in saving lives.

I am proud and thankful to safe world for women to be partnering with Sewa Development Trust Sindh for humanitarian support for the most vulnerable and marginalized communities in Pakistan".

I would also request to international communities, philanthropists and charity organizations to come forward and contribute themselves to save lives of women and children suffered in natural disaster, they are looking and waiting to you.....

A drop of water makes ocean and a single penny makes million":

"By honoring a woman, we honor a whole nation"

Amber Balouch, from the village of Ketti Khushk (Teshil Kandiaro, Khaipur, Sindh), grew up in a culture where women are not allowed to get an education.

Lucky to have parents who rejected these customs and allowed her to study, Amber decided to dedicate her life to uplift rural women and began working in 1995 with non-governmental organisations.

In 1999, she created the Society for Women Development, working in the Khaipur district of Sindh.

Working day and night scheduling meetings with villagers, she created the "Project for the establishment of Non-formal Basic Education Community Schools".

This demanded courage and perseverance to motivate men to allow the women to attend these trainings.

Little by little the success of her programs ended up convincing them. Amber has also opened a display center to sell handicrafts made by the women.