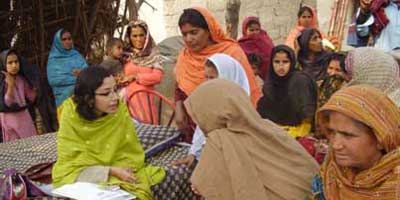 “It is indeed a big support for us to cultivate our land and get two benefits.  One, growing vegetables for my home and community, and the other, [to] earn income”

Over 1 and a half million acres of standing crops lost 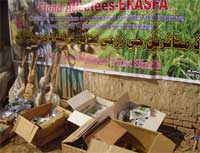 SDTS provided vegetables seeds, toolkits, and fertilize,r to 500 beneficiariesThe selected UCs Agra and Ripri Tehsil Gambat of district Khairpur have been totally underwater and badly affected by the recent flood.

More than 10,500 people were affected, 1,200 households damaged, and 82% of the standing crops have been destroyed, and means of agricultural production (e.g. seed stocks, irrigation, livestock, farmland) have been destroyed or damaged – rendering affected farming households highly  insecure in food and livelihood.

During this flood, affected areas were drastically affected in terms of economic opportunities –  which were the sole source of income for the marginalized families. The demography of vulnerable and low income families has been changed in terms of assets and resources as a result.

The loss of standing crops exceeds 1.59 million acres which further accentuates the vulnerability of the agrarian based communities, many of whom are still trying to recover from the 2010 floods. 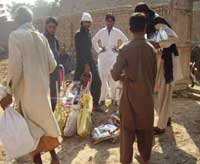 Supporting small landownersThose families who are the worst-affected rely on agriculture as their only source of food and income.

Resource-poor – and small landholder farmers in particular, are experiencing food insecurity due to limited access to agricultural inputs like crop and vegetable seeds, and fertilizers.

Immediate attention is required to support the affected resource-poor and small landholder farmers and other vulnerable groups by increasing their access to agricultural inputs.

The project, Early Recovery Intervention focused on distribution and provision of  seeds and fertilizer.

Provision of vegetable seeds help the poor and vulnerable flood-affected women to restart vegetable production, helping them to fulfill their dietary needs.

The seeds provided for seasonal vegetables such as tomato, saag, turnip, carrot, cauliflower, paalak etc.   Each beneficiary household received vegetable seeds for planting on  a  1/2 acre of land.

A standard toolkit that was provided included:

Seeds, fertilizers, and toolkits, enabled affected families to restore their economy and re-fertilize their lands

“To contribute to restoration of agricultural activities and improve food security of poor farming communities living in the two target union councils in District Khairpur.”

SDTS provided vegetables seeds, toolkits, and fertilizer to 500 families in both UCs of district Khairpur in Rabi season.

It was big support for the affected population for early recovery of their agricultural economy.

The emergency assistance like seeds, fertilizers, and toolkits, enables affected families to restore their economy and re-fertilize their lands to combat food security.