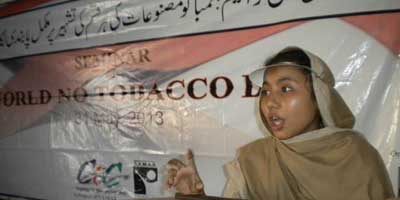 In Pakistan, the government, civil society, and community activists have joined in a coalition, to create awareness regarding use of smoking and its causes.

Sewa Development Trust Sindh (SDTS) in collaboration with Coalition for Tobacco Control (CTC) Pakistan observed World No Tobacco Day in district Khairpur and Jhudo-Mirpurkhas on 31 May, 2013.

Smoking is a leading cause of cancer, lung diseases, and heart-related diseases.  In the world, 1 in 10 people people die due to tobacco use, according to WHO.

The statistics on the smoking habits of Pakistan’s population, including youth and children, are stark:

One event was a seminar with young people in Khairpur –  with a participation of 42 young activists including students, active citizens, and social activist.

The second event was a public rally in Tehsil Jhudo district Mirpurkhas, with participation of 202 community members including teachers, workers, farmers, business holders and social workers.

Participants were informed about the importance of the day, that the World Health Organization (WHO) every year celebrates World No Tobacco Day to create awareness regarding health hazards for smoking, to formulate policies, and implement laws to control the use of smoking.

In 2004, Pakistan ratified the Framework Convention on Tobacco Control (FCTC) treaty and developed policies and an ordinance to stop and ban smoking advertisements.