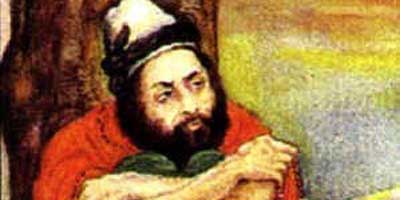 Shah Abdul Latif Bhittai, famous Sindhi Sufi scholar, mystic, saint, poet, and musician. It is said that, on seeing his personal worth, and the peaceful and ascetic nature of his fame, his enemies abandoned their rivalry. Image: Wikepedia.

It was dark day when local and national newspapers published the news regarding the digging of a grave of the deceased Bhoro Bheel in Pangrio. The crowd dug out the body and dragged it through the streets of the town of Pangrio in a dispute over the location of the grave.

A lot of anger, tension, depression. and pain couldn’t decide what the fault was of deceased body of Bhoro?

Was the graveyard property only for Muslims? Did he belong to the minority community or was he born in Pangrio?

Once upon a time Sindh was land of peace and Sufism – comparing questions in mind, I ask myself, what is happening to the country? And even, what can we expect from religious terrorists whose attacks on religious holy places including mosques, churches, mandir (Hindu), and Imam Bara (Muslim) are done through firing and bomb blasts?

Every soul has to depart from body, and only the body without a soul has to take rest – which may did not get rest in life, especially Bhoro Bheel.

The two meter grave land with body of Bhoro in Muslim graveyard in Pangrio was making harram (sinful acts) in the graveyard?

Those were devils or follower of devils who made this heinous crime. It should be treated as crime against accused involved in the court of terrorism.

It is also an alarming situation in Sindh, where religious extremism activities are expanding in the southern and northern parts of province; the incidents in Shikarpur, Ghotki, Mirpurkhas, Umerkot – but not Badin, against minorities. shows that over the last decade, these incidents are increasing day by day.

Shah Abdul Latif Bhittai, a great sufi saint and poet of Sindh had close relations with Hindus; he went together with them for Hanglaj – Hazrat Sacal Sarmat also took parts and mentioned minority in his poetry. Still, even minority communities go for prayers to Hazrat Lal Shahbaz Qalander and other Sufi Saint tombs.

This shows clearly the message that there is no difference in humanity or human beings in the name of religion.

Why have we forgotten the lessons of peace, love, and interfaith harmony taught by our ancestors from centruries ago?

While we are against our neighbours, friends, and colleagues, the ancestors of Bhoro Bheel and ancestors of Pangrio Muslims were together and had long lasting relations; they were best friends.

Who are these persons among us? We need to find these devils.

I must say that those so-called Muslims are not from us; neither do they represent the entire population of Muslims in the world or the religion itself.

This is an individual act of crime, and those are criminals against humanity.

Two meters of grave in Pangrio ...