Women’s Access to Property and Land Rights in Northern Sindh 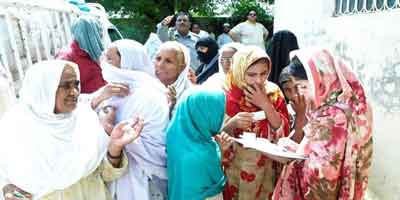 Women’s Access to Property and Land Rights in Northern Sindh

Devastation on an Unimaginable Scale

UN Office for the Coordination of Humanitarian Affairs (UN-OCHA) officials have said the disaster eclipsed the scale of the devastating 2004 Indian Ocean tsunami, the 2005 earthquake in Pakistan, and the January 2010 earthquake in Haiti put together.

According to Sindh's Provincial Disaster Management Authority (PDMA),  seven million people are affected in Sindh, and some 7,277 villages with population of 7,000,491 people – including women and children, are at the risk of being submerged.

Many families have moved in with relatives in other districts. During the devastation, 909 persons were injured or disabled, and 186 persons died. 2,453,503 acres of crop were affected, with land of 6,818,209 acres.

Marking of the land for particular owners/farmers has vanished due to flooding.

In some cases, s whole settlement was flattened by the flood, leaving no signs for defining the household plots and farming areas.

Increased Risk for Corruption and Exploitation

It is feared that most of the people lost their land/property documents, and this may be an opportunity for corrupt persons to exploit female-headed households for manipulation when they will approach them for land/property ownership documents.

In view of the above it seems necessary to build the capacity of the local grass root organizations and local community to cope with these issues.

The women – especially female-headed households, are the vulnerable groups; they face violence and gender discriminations at  all levels.

It is important to inform these groups about their rights, and get necessary support from the government agencies ,as per priority.

To create an environment for women-head households and land owners, and women at risk  that they may enjoy equal rights through mobilization, information,  participation and through the activism of civil society organizations.

Also, document and record cases of female-headed households and landowners in 5 district of northern Sindh.

The target groups are

The target number of beneficiaries are: 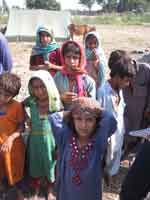 The project has been planned to be implemented with the active participation of local organizations that are active at grassroots levels for women focused projects and activities.

These CBO’s (community-based orgnanisation) capacity will be enhanced through different trainings, and a strong coordination will be developed to meet the project goal and objectives.

The selected CBO’s will be participants in the project implementation process.

In the project, SDTS has planned to involve different stakeholders and service providers to victimized women, i.e. revenue department, district government, community development department, media, and lawyers. They will be mobilized to play their active and responsible role in project implementation.

SDTS will document the case studies of women land titles in five project districts in the shape of reports, and will present and share these reports in public through media coverage and by circulating these reports to other stakeholders.

The participating organizations will be trained in basic skills needed to work on women rights and gender based violence. Trainings will be organized for SDTS project staff and 20 local organizations responsible for implementation of the project activities.

Awareness-raising activities will be implemented by the participating organizations.

The  costs of all the activities undertaken by the participating organizations will be reimbursed by the SDTS.

SDTS will ensure its participation in all the activities and compile the database/record of all activities.

Publications will also be published for raising awareness on the issue of women land rights.

At least fifty (50) female headed households will get reclaiming their land titles and others will be linked with other government and non-government organizations for their support under government-announced schemes.

To document case studies of the female households and women land owners regarding land  titles and entitlements.

A baseline survey will be conducted with semi-structured questionnaires in the targeted districts to map the data regarding GBV and females  who lost their land documents, and identify the data for eligible women to get support from government institutions.

SDTS will involve media through writing articles in the local newspapers and in district working group.

SDTS will publicize the project interventions through publications and media.

The media will be participating in the district property and land rights working group as a member, and will be encouraged to have articles on the women issues.

The awareness sessions will be publicized through banners and media coverage – and also the  internet and social media will be used for project interventions.

The project activities have been designed in a way that it will be sustainable project after its completion.

The project focuses on mobilization, awareness raising and capacity-building of local organizations and stakeholders. The district property and land rights working group will be  established in all 5 districts, and that will be trained and capacitated enough to continue the work.

The CBOs are trained in the skills to work on GBV especially for women rights and issues. They will continue working on awareness-raising and legal aid within their existing resources.

They will also be trained in mobilizing resources from external resources to enhance their activities.

The media will also be motivated to continue organizing the talk shows on awareness raising and psychosocial covering women rights themes.

The project will mobilize maximum assurance of local government to improve the service delivery for the victims of land ownership.