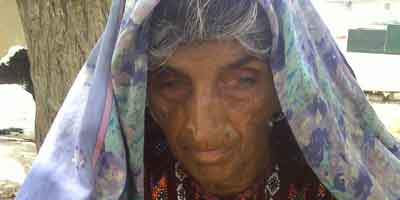 In the August 2010 flood, many lives were lost and many families were impacted and devastated in different places.

Musmat Naz Khatoon, 53 years old, has been hugely affected by this flood, in the village Khawand Bux Bahalkani.

Before the flood, they were spending their life normally, but after flood their life became dramatically changed.

Naz Khatoon lost her eye sight and now she is completely blind.

And her daughter Bakhshul was just a little disabled before the flood.

But after flood, she is completely disabled and all her organs are not functioning properly.

Now she is fully dependent upon her family members, even for drinking, eating,and all other related work.

They are our beneficiaries.

Another sad story of this village is related to Mr. Rafique Ahmed, 45 years old.

He was a normal man and a full-time worker as a  donkey-rider (as his source of income) before the flood, but after flood he had a big shock and became too panicked  –  thus acquiring a  serious illness: as a disease of “cancer”.

Now he has a very miserable life –a silent life, because his organs are not moving properly; he is completely on bed rest by the doctors' suggestions.

Now he has no source of income.

Mr. Soomar, age 60 years, of the  village of Bagh Ali Bahalkani, was a very healthy person before the flood.

In August 2010, the flood came, his three buffaloes were swept away by the flood.

Afterwards, suddenly he became shocked, so now he is in a very delicate situation.

His body has no muscle mass and he is in very weak position. Now he is seems to be a disabled person, and also he has no source of income.

Mr. Soomar was selected by VC for the shelter, so he is one of our beneficiaries.

Story from another village

Mr. Irshad Alim, aged about  28 years, of village Hairuddin Khan Bahalkani, before the flood he had a normal life; in August 2010, the flood came.

During the flood, there was forced migration, and a tragedy occurred to him.

His right leg has broken, while he was traveling/migrating to another place with his family members.

Still today, he could not be self-sustained from those injuries. So now, he is equal to a disabled person and he can not work his daily routine.

Along with Village Committee (VC) advice, we have selected him as our beneficiary also. We hope may be this help enable him to stand on his feet.