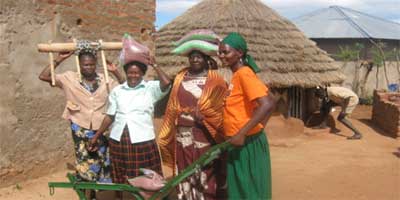 AWARE UGANDA (Action for women and Awakening in Rural Environment) was formed in 1989 by a group of local rural women of Kaabong District in Karamoja region, a semi-desert region in the North East of Uganda, bordering South Sudan and Kenya.

On 31st May, 2010, Grace Loumo, the founder of AWARE Uganda, received a Certificate of Recongition for her leadership skills in campaigning against HIV/AIDS.

The award was presented by President Museveni of Uganda, on behalf of the parliament and the people of Uganda.

Staff capacity is 8 management staff, 10 board management, 150 members and 50 volunteers.

Karamoja has been called Uganda's 'land of warrior nomads'.

Stretching across an isolated corner of Africa, it is named after the people who have there lived for centuries:  the Karimojong of Karamoja.

With more than 27,000 square kilometres, this arid expanse of savannah and bush forms the northeast edge of Uganda where it borders Kenya and the Sudan, with Ethiopia not far off.

The region of Karamoja extends over 27,900 square kilometers. The region is mostly a semi-arid plain with harsh climate and low annual rainfall. It is largely savannah, covered with seasonal grasses, thorned plants, and occasional small trees. The average elevation of the plain of Karamoja lies at around 1400 meters (4500 feet) above sea level. The large mountains; Mt. Kadam, Mt. Napak, and Mt. Moroto — lying at the periphery of Karamoja — have peaks reaching around 3000 meters (10,000 feet) and higher.

To its east stands the Rift Valley escarpment towering over the Kenyan plains and scrubland.  To the north lie the pristine basin of Kidepo National Park and also a mountainous vastness that leads into the Sudan.  Similarly, to the south, there are the rugged peaks of Mount Elgon National Park, which were formed by volcanic eruptions millions of years ago.  In the west, abundant swamps enter into the Acholilands.

Set on a large plateau, much of Karamoja is more than 1,000 metres above sea level.

According to the recent Ugandan census figures, some 956,000 people live in Karamoja. The actual numbers, however, are estimated to be higher.  With Moroto town as its regional capital, Karamoja has five districts — Moroto, Kotido, Nakapiripirit, Abim and Kaabong.

District towns have a degree of population density, but pastoral life as well as the scarcity of rain, keeps people on the move and well dispersed.

Karamoja’s climate is harsh.  In many areas, rains do not often exceed 800 millimetres per year, sometimes hovering around a mere 500 millimetres.  (At least 1,000 millimetres is needed to sustain people in a land without infrastructure.)

Any rain usually falls sporadically between June and October with the desert winds and the hot dry season taking over the land from November to March.  In recent years, drought has become increasingly frequent and severe.

Inter-regional conflicts have kept Karamoja cut off from the rest of Uganda.  The longest running civil wars in Africa have surrounded and spilled into the region between southern Sudan and northern Uganda.

The Karimojong themselves, however, also have contributed to the region’s isolation, being in frequent conflict with their neighbors in Uganda, Sudan and Kenya due to frequent cattle raids.

In recent years the nature and the outcome of the raids have become increasingly violent with the acquisition of AK47s by the Karamojong.

The Ugandan government have attempted to broker deals for weapons amnesties, but the number of cattle the Karamojong have wanted per gun has proved too steep for any meaningful agreement to be made.

There were a number of significant clashes between the UPDF and nomadic warriors in 2010. The UN High Commissioner for Human Rights, Navi Pillay, said in June 2010 that at least 19 people had been killed in two incidents on January 4-7 and January 22, when the army used a helicopter gunship and ground forces against warrior communities, before a third incident, on April 24, which resulted in at least 10 deaths. She claimed that the death toll from all three incidents was, most likely, even higher than the confirmed numbers she quoted. She called for the opening of an impartial inquiry into the attacks.

By early 2011, the UPDF said it was starting to scale down its military operations in Karamoja. It claimed to have largely cleared the region of illegal weapons. However, in 2011, fresh allegations of torture carried out by the army in Karamoja were recorded by journalists working on a Pulitzer Center-funded project

Like other pastoral people, the Karimojong have immeasurable pride in their traditional way of life, and many have remained resistant to change no matter the force trying to change them.

Countries and boundaries have meant little in Karamoja until recent times.

The conflicts over cattle could be partly due to a traditional belief that the Karamojong own all the cattle by a divine right, but also because cattle are also an important element in the negotiations for a bride and young men use the raids as a rite of passage and way of increasing their herds to gain status.

The 1980 famine in Karamoja was, in terms of mortality rates, one of the worst in history. 21% of the population died, including 60% of the infants.

Human welfare, living conditions and quality of life of the people in Karamoja have declined considerably due to various factors such as environmental issues, insecurity, marginalization, illiteracy, poor health and poor infrastructure.

Much of Karamoja remained heavily dependent on the largesse of the United Nations World Food Programme, as the region entered the second decade of the twenty first century.

In 2011, in the wake of the severe 2011 Eastern Africa drought, food shortages were again reported in the region as well as other areas in northern and eastern Uganda. Karamoja and the Bulambuli district, in particular, are among the worst hit areas, with an estimated 1.2 million Ugandans affected. The Ugandan government has also indicated that as of September 2011, acute deficits in foodstuffs are expected in 35 of the country's districts.

Significant numbers of the peoples of Karamoja belong to and attend both the Catholic and Anglican Churches. Baptist and PAG churches are also coming up in the area. There has been a small population of Muslim Karamojong people for several decades, particularly around Moroto. Many, especially those who did not attend school, retain their traditional religious beliefs, and for some Christianity or Islam is something of a veneer over this. Incomers are represented in all the above groups.