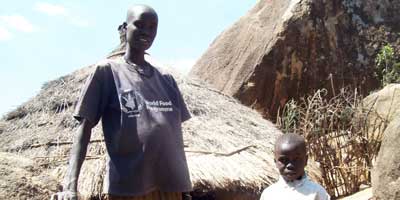 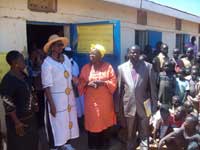 First Lady visits AWARE Uganda - February 2012. Photo: AWARE Uganda.I would like to highlight the situation of grassroots women in Uganda, especially in Kaabong district of the Karamoja region, where AWARE-Uganda operates.

Globally, a lot has been said and written about the liberation of women, especially in the last century. However, despite their contribution to the economic and social advancement of their countries and the universal declaration of human rights, women have often gotten a raw deal.

And despite their struggles to be free in their strategically central position in the lives of their families and societies – they are mothers, helpers, workers, warriors farmers, champions,  queens, and they are family builders – most societies subject women to economic manipulation, sexual exploitation, and political marginalization.

Since the liberation war in 1986, Ugandan women have fought side by side with men and have proved that they are capable of enduring tough situations, demonstrating great courage and dying for a cause.  Some people from various parts of Uganda have understood this –  one of them being Uganda's president.

In recognition of the vital role women played in the success of the liberation war, a woman was appointed the country's vice president and women ministers have been appointed.

Rural Women's Rights - Still a Myth for Many

However, this has had no effect on the life of a rural woman.

While the constitution of Uganda affirms that no one should suffer discrimination on the basis of race, religion, political affiliation, or sex, in real practice, grassroots women in Uganda do not enjoy equal human rights.

They have fewer opportunities for education, employment to carry out village political leadership, access to credit, property ownership, and to participate in decision making.

Uganda's current government policy on women aims at raising the status of women and fosters their emancipation from socio-economic, political, and cultural bondages. This has largely been through a programme to review and re-formulate sectoral policies to ensure that implementation strategies are put in place.

The Reality in Rural Uganda 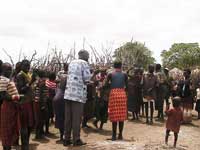 Traditional homestead in Kaabong. Photo: SafeworldThe quality of life of rural women deteriorates with the increasing distance from the capital. Hence, a rural woman in, say, Mukono district (20 km  from Kampala city) has more life choices than her counterpart in, say, Kaabong district (600km from Kampala). In areas where the physical security of people and their properties is no longer known due to long-running cattle rustling and tribal wars such as in northern and north eastern Uganda, women’s rights are not even talked any more.

These [wars] are further compounded by unbecoming traditional/customary laws.

Rural women are mistreated by men (husbands) who regard them as their objects – bought properties, because of the traditional demands for the high bride prices men pay for them.

The low social status of rural and urban Uganda women makes them vulnerable to violence and sexual harassment. Sexual harassment of women by men goes on all the time –  on the streets, in work places, in offices, in universities as conditions for career advancement, job security, and examination success.

Incidents of incest and defilements of young girls are on the increase.

This – along with female circumcision, wife inheritance, despite international declarations and conventions –  makes the prospects of a time that women will live liberated lives as full citizens a far-fetched dream.

The Situation of Women in Karamoja

Karamoja, lying in the north eastern part of Uganda by the time of Uganda’s independence in October 1962, was like a human zoo.

A foreigner traveling in Karamoja during Uganda’s 60 years of colonial administration and also during the earlier post-independence regimes, required a permit.  Karamoja presents very special development challenges because of the long period of neglect the region has suffered since Independence under various regimes; this has made the place desperately poor.  However, the present government is doing its best to bring development in the region by the initiatives of the First Lady, who is also the Minister of Karamoja. 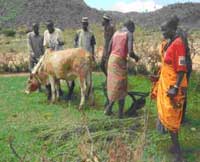 Introducing ploughing. Photo: AWARE UgandaAlthough the landscape of Karamoja is beautiful with hills rising to more than 300m from the central plains, the climate of the region is semi-arid and living conditions are harsh.

Low rainfall inhibits crop cultivation and yields. Cattle, sheep, and goats are the main resource of the pastoral ethnic groups, but their large numbers have resulted in serious overgrazing, accompanying deforestation, soil erosion, and desertification.  Some parts of Karamoja are becoming progressively uninhabitable.

I recommend that grassroots women activities be recognized as an economic development contribution to society; programmes and policies should directly target women – espcially, grassroots women.