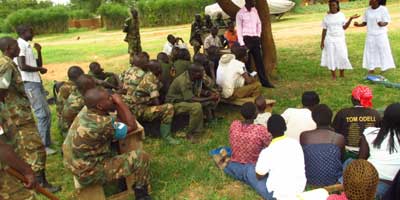 Linnet removing 'jiggers' - parasitic infection.There has been a lot of progress over the last year, since our extreme famine conditions. We remain extremely grateful to donations from our dedicated supporters at that dreadful time, and subsequent donations which have helped us to help more women and children of Kaabong. In particular, funds raised by All Saints Primary School, a village school in Bishops Caundle, England, who are teamed up with our local school here in Kaabong so that the children can exchange letters.

AWARE is very thankful to Linnet Griffith-Jones, from the UK, who arrived with us in January 2014 as a volunteer and has helped us to move forwards significantly in the six months while she was with us.

We are also extremely grateful to Thare Machi Education for the donation of their HIV/AIDS awareness-raising DVDs to assist in conveying the message of the HIV/AIDS programme in a more friendly and approachable way by using the local language - a wonderful and important innovation!

Our achievements over the last year have included carrying out 50 training orientations with community paralegals on human rights in Kaabong Township, with a particular focus on women and women's rights.

We also continue to raise awareness and train 100 rural communities in Kaabong town council for water sanitation and water treatment. Currently we are training 200 female members on water treatment and purification technologies at our women’s centre.

Moreover, our co-ordination programme is working towards the development of four project ideas that encompass international action against hunger.

Also there is an idea to develop a project on building resilience and adapting to climate extremes and disasters in Nairobi and Kampala.

The general focus of the discussion group was survey and baseline analysis on climate change in Loyoro Sub-county.

We looked at climate and weather changes in recent years and the main activities of rural women at a grassroots level.

In partnership with Rafiki Theatre Group, we carried out GBV (Gender based violence) and HIV/AIDS drama, training and capacity building of military personnel and their families and local communities in rural Kaabong and Kotido Township on gender-based violence, human rights and domestic violence through participatory theatre performance.

This was aimed at teaching the army to be aware of the risks of HIV, how to avoid reinfection and prevent gender-based violence through counselling and guidance.

We held five community awareness workshops with 2,000 local people on gender-based violence in Kaabong province in the towns of Kalapata, Sidok, and Katheli.

Addressing reports of gender based violence in the community

We have partnered with Uganda Women’s network to promote awareness of gender-based violence in Kaabong.

We held two trainings of capacity building for our staff members in Kampala to empower and encourage them to address domestic violence and raise awareness in Kaabong through various documentations and reports we receive.

AWARE has received a loan from Savings and Credit Cooperative (SACCO). AWARE has also requested a loan from the microfinance support centre. If the loan of 30,00,000 ugx is secured, it will be one of our greatest achievements because this would make a great difference in the Kaabong community. We will be able to give much larger loans to interested small groups and individuals willing to do business.

We were able to build the capacity of our caregivers, which has greatly improved the performance of the children at our Early Childhood Development (ECD) centre. A visit from Ms Eun-Young Jeang to the ECD centre was well received and she had a successful meeting with the Director. We received 20 expecting mothers at our maternity-waiting house. We also received car support and had a safe delivery.

AWARE was also able to harvest over 2000 kg of crops that included maize, sorghum, groundnuts and other crops such as potatoes and cabbage. This was a big achievement for the organisation because it made it possible for us to carry on with other activities as we sold the crops and gave some to the group members who participated in cultivating the garden.

Mobility for people with disabilities

Aware is creating improvised wooden supports for two people with disabilities - Achila Teresaa and Moses - to enable their easier mobility. AWARE is also lobbying for donations towards the purchase of wheel chairs that help disabled people with their mobility.

Inadequate funding affects the administration of the organisation and hinders the provision of services to the communities we target. This is a great setback to the efforts of the organisation because the programmes and activities cannot reach our clients as planned.

Patriarchy and violence in the home

Karamoja is a very patriarchal society and women suffer extreme life circumstances. The vast majority are subject to the authority of their husbands, which they cannot question, and many are victims of violent acts such as domestic violence and marital rape, among others.

As part of the 'marriage process', there is a custom whereby young men rape young girls - and this is still going on.

With such a background, women generally have no resource rights such as access to land or control over their reproduction, which is defined in the act of marriage as ‘paying cows’.

Polygamous marriages further put women at an increased risk of HIV/AIDS infection and other STDs (Sexually Transmitted Diseases) as men can marry as many women as they wish.

In addition, the infant mortality and maternal mortality rates in the Kaabong district are currently alarmingly high, with MMR 750/1000 and IMF 109/1000.

Drought and lack of clean water

Lack of sufficient clean and safe drinking water has been a major challenge in Kaabong. Women and the rest of the Kaabong community usually have to walk for over 30 kilometres to collect water in times of drought.

The use of illegal guns and cattle rustling in the area create a high level of insecurity that hampers the work of the organisation. The insecurity also makes some areas almost impassable and inaccessible. We have also had cases of families who have lost their stored grains to rustlers.

Because of the high level of illiteracy, it is nearly impossible to attract local highly qualified staff, who can fill some of the positions in the organisation for a long period of time, and this negatively affects the work of the organisation.

Transportation of urgent case to maternity waiting house. Both mother and baby were saved.Impassable roads are still one of the major problems for Kaabong communities.

No clear roads where demarcated by the local authorities and there are only 'footpath roads.'

And, when rains hit, they hit hard. In between droughts, floods cause devastation and destruction.

As a final straw, olitical interference affects organisational decisions and the focus of the programmes. For example, some politicians interfere and want to have programmes implemented in their areas even when they are not AWARE’s priority.