"I have just purchased a mattress" 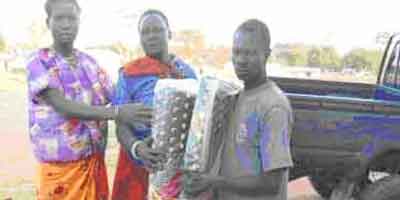 'I have just purchased a mattress'

"I am very happy of the microfinance at the AWARE-Uganda centre which has improved my financial status, and I have just purchased a mattress; something which I never slept on." - Me Namongo Anna

"We the pregnant mothers at risk from far villages in Kaabong District's hard to reach areas, who are at present at the AWARE-Uganda centre, do appreciate the initiatives of AWARE Maternity Waiting House to improve morbidity and mortality rates." - Nakong Mary on behalf of all.

"We have improved our home food security through ox-ploughs and seeds from AWARE-Uganda". - Women's group, Biafra.

"I would not have won this election of Councilor and be a leader if I had not gone through numerous trainings on leadership skills, through which I acquired the best knowledge and skills" - MS Nakiru Magalane, a present woman councillor of Kaabong Township.

"Through exchange visits, we the group who visited UCOBAC in Kampala and SWID in Jinja, has learnt new strategies on basic care and support, and also how women acquire land and housing."

"AWARE–Uganda has changed my life through support and care. I can now move freely in public without discrimination."

The women of AWARE Uganda continue to struggle against all odds.

Challenges faced in the last few months have included:

Major achievements in the last few months have included:

AWARE Uganda has received help from: