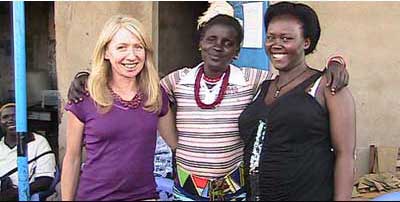 Chris Crowstaff and Helen Andila (r) at AWARE Uganda in 2009

"Like other pastoral people, the Karimojong have immeasurable pride in their traditional way of life, and many have remained resistant to change no matter the force trying to change them. After all, in a desert-like land, the Karimojong have survived for centuries, and sometimes survival is all that matters."

In 2008, when researching women’s issues, Chris Crowstaff - founder of Safe World, came across,  the following letter on the internet.

We the women of Kaabong Women’s Group on behalf of the rural grassroots women in Uganda, especially Karamoja region, are opposing military actions, budgets, arms fairs, and highly condemn the acts of terrorism and the revenge the USA has taken. Women, children are dying innocently.

We bring this message of millions of women deprived of their basic human rights and status in all parts of the world and we join the International Women Count Network in London as we come to the third Global Women’s Strike in which we shall all participate, with the theme “Invest in caring not killing”.

Women and children are the majority of those killed and wounded in armed conflicts, besides their hard work of life-giving, going through severe hardship, cleaning, nursing, building, walking miles for clean water.

All of us who have joined the Global Women’s Strike are here on earth as living witnesses of thousands of people – women who suffer acts of violence and injustice caused by armed conflicts. We forced political and economic leaders to listen to us about military budgets, but we’ve failed to obtain even one satisfactory response to our demands. The demands stand unchanged.

It is up to us to continue acting with all anti-neo-liberal globalization and anti-sexist movements to force international financial institutions (World Bank & IMF) to radically change course and to make the UN assume veritable political leadership in the people’s, particularly women’s, interests. We must also find the means and the platform from which to continue our action to eliminate violence in the world. We have a lot on our plates.

Members of Kaabong Women’s group had a silence of prayers for all those who died in the terrorists act in New York and Washington and for the Women and Children who died in Afghanistan. Throughout history, women have crossed geographical, cultural and ideological borders in search of peace. We the women can find an end to this terrible act. Join us on the third Global Women’s Strike so that we make it real: “CARING NOT KILLING”

Yours in Power to the Sisters,

At the time Chris was running an online community and one of the members, Helen Andila, who lived in Uganda wrote to Chris...

“I know Kaabong district, my mother's village is not far from it. The occupants are called Karamojongo's and that's their language.

The highest percentage of them are illiterate, they especially depend on cattle keeping, and they do anything even kill for their cattle.

They are famous in Uganda for cattle rustling, their environment is almost unliveable.

Their land is dry, dusty, hot, dirty, below poverty line, no power or running water, and yet they produce many children due to illiteracy. They are violent and the government of Uganda has for so long been trying to disarm them with little success. To them these arms are for self and cattle protection, their most treasured assets.

Women come second in priority to these people, a man with many wives and children is considered very wealthy and an elder in society.

Traditionally (still practiced in very remote societies) these women are raped into marriage, once you have been abused you can't go back to your father's house so you go to the man's family and the marriage is arranged.

Many heads of cattle up to 300 were paid in pride price. My grandmother was married with 230.”

In Spring 2009, Helen managed to track down Grace and made contact with her. Grace travelled south to meet with Helen. Grace said we all need to see for ourselves the situation there.

In Summer 2009, Chris Crowstaff and her husband Andrew journeyed, together with Helen, to see Grace and the people of Kaabong.

The Children of Kaabong - by Chris Crowstaff

Visiting women and children in rural Uganda - by Chris Crowstaff