A blow to reproductive rights in Pakistan 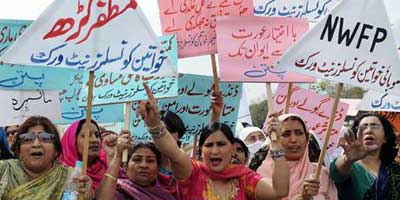 A blow to reproductive rights in Pakistan

Article first published by kafila.org and reproduced here with kind permission of the author.

Early in July, Kashmala Tariq, Member of the National Assembly (MNA) of Pakistan, whom Wikipedia describes as “actively involved in women’s rights”, opposed the tabling of the Reproductive Health Bill 2012, saying that it was not in conformity with Islamic laws. The Bill was introduced by another MNA, Atiya Inayatullah, with the purpose of providing reproductive health services, including legal access to abortion,  to women in Pakistan.

Tariq accused the Bill of following the agenda of foreign NGO’s and stated that such proposals that might be in contravention of Islamic injunctions should be sent to the Council of Islamic Ideology and every party’s opinion should be sought. The Bill has been sent to the Cabinet Division for further deliberations.

Does this mean that our women representatives don’t know what reproductive rights include? The responsibility of women parliamentary representatives in Pakistan is more challenging than that of men, as women are more often made victims of oppression either in the name of culture or religion.

Reproductive justice is essential as it recognizes that women’s reproductive health is shaped by the socio-economic conditions of their lives. This includes conditions like human rights violations, race, sexuality, and status that they have in their country of residence. Other fundamental rights and reproductive rights include access to sex education, access to information and treatment of STDs, STIs, HIV and last but not the least, the right to CHOOSE whether or not to have an abortion.

Let’s take a look at the condition of women in Pakistan, voted one of the worst countries for women by Reuters. Let us be clear that the first two countries were Congo and Afghanistan which are combat zones, not people‘s democracies.

In 2010, Pakistan Today did an interview with religious leaders on the issue of abortion, finding them to be fairly open on the issue. A Mufti who spoke anonymously for fear of ‘undue backlash’, said that while scholars from all schools of thought in Islam agree that abortion is forbidden after the first four months of pregnancy, Hanafi scholars permit abortion until the end of four months, likening the act to “moral transgression” rather than “crime”.

The Quran, he maintained, does not explicitly ban abortions either, including in verse 6:151, which speaks about not killing one’s children out of fear of poverty, but it does not address the issue of the status of a foetus at all. In his view, in Islamic legal terminology, one would use the principle of ‘al-aham wal-muhim’ (more important versus less important) in deciding the case, allowing scholars to permit abortions up to day 40, and in some schools of thought, even up to day 120 of gestation. He added that within moral and religious bounds, a physical or mental health provider must always be considered a better authority than a religious scholar when dealing with individual cases.

Current Laws on Abortion in Pakistan

At present, abortion is illegal in Pakistan. Section 338 of the Pakistan Penal code explicitly says that “Whoever causes a woman with child whose organs have not been formed, to miscarry, if such miscarriage is not caused in good faith for the purpose of saving the life of the woman or providing necessary treatment to her, is said to cause ‘Isqat-i-Haml’ (abortion) is liable to a punishment of three years imprisonment if the abortion is performed by the woman’s consent otherwise a maximum of ten years.

Section 338 B and C of the Pakistan Penal Code provides that termination of a child whose limbs have been formed for any reason other than to save the life of the mother shall be liable to pay Diyat (blood money) and such person is also liable for a maximum of seven years imprisonment. The law does not allow abortion on the basis of any abnormality in foetus.

We are a country in which we have no conversations with our children about rights and wrongs of sexual health. We fail to explain to them logically the intricacies of sex and sexuality but we expect them to behave in a responsible manner out of nowhere. We don’t teach them about dangers of HIV, STDs, STIs or necessity of safe sex practices but we demonize something which is a natural part of human life.

In 2010, Dr. Sorush and his team conducted a study to monitor Millenium Development Goal (MDG) 5 themes in Pakistan. Sorush says:

“Our research showed that even doctors frequently turn away women seeking abortions, because they see these procedures as sinful. But it is not a question of morality. It is a question of health – and everyone has a right to health.”

Guttmacher Institute research shows 890,000 women have unsafe abortions annually in Pakistan. 800 of these women will die and a further 197,000 will be hospitalised due to complications. According to the Head of Advocacy at the Shirkat Gah Women’s Resource Centre:

“The problem is that there is no legal cover for these procedures. Women are told upfront: this is your risk, so if you don’t make it, that’s your problem.”

Women may take on this risk alone, but the physical price they pay has significant consequences for developing countries as a whole – where the majority of unsafe abortions are carried out.

“If a woman is in poor health after having an unsafe abortion, she can no longer effectively contribute to a household, and her family has to bear that extra financial burden. This lack of active participation is a barrier to achieving national development goals and creates an economic burden for the family and, ultimately, the state.”

In a country like Pakistan where women don’t have equal rights, there is a lack of basic necessities, increase in sexual assaults, marital rape, forced marriages, poor access to healthcare and education, no access to contraceptive knowledge and safe sex products, and where even doctors and primary health care providers act like judgemental moral police – it is patently unjust to force women to have children who cannot be taken care of properly. In this debate, the supposedly religious people forget that they are ignoring the person who is living and breathing and existing in this world.

Pakistani men only propagate abortion when they want to hide their sin or do not want to get caught or when they are too cowardly to take responsibility for their actions. It is not only a woman’s responsibility to take care of her sexual health, but that responsibility is her partner’s as well.

Access to safe and legal abortion is an intrinsic part of women’s rights. Special Rappporteur to UN, Anand Grover, released a statement in 2011 calling for the worldwide legalisation of abortion. He argued that the continued criminalisation of this medical practice has led to a systematic abuse of women’s human rights – including the rights to life, health and equality.

Yes – the right to choose when and under what circumstances to have a child is a right that women should have!  Pakistan’s women parliamentarians must protect this right for all women. These MNAs, Senators and MPAs have to get off their religious high horses and face the reality, that they have not only failed to protect the rights of 50% of population of this country, but they have lost the confidence of the people they claim to represent.

Petition: Speak Out Against Child Sexual Abuse in Pakistan