The Under-Reported Sexual Violence Against Hindus in Pakistan 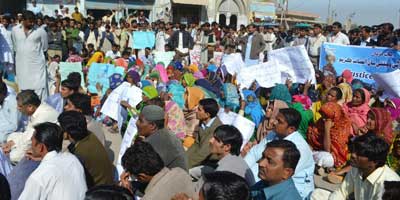 The Under-Reported Sexual Violence Against Hindus in Pakistan

We have heard all about how rape is used as weapon in mass-scale war. More than 200,000 women were brutally raped in the 1971 war in East Pakistan to silence all the voices that were being raised against the Government of Pakistan. Every year, Pakistanis wail about their prisoners of war and how their army had to surrender but they will never talk about the horrendous acts they committed.

Rape as a Form of Ethnic Cleansing

Pakistan will be one of the unique democratic societies where rape is used as a weapon against marginalised communities as a form of ethnic cleansing. Here, the rest of society stays quiet because it is not something which is happening in their own backyard. In Pakistan, rapists are never brought to justice and the survivor’s plea for justice turns into another  ‘agenda’ of  ‘Western agents’ and rival political parties.

When one speaks about the rape of Muslim women, the clergy starts questioning women’s characters and shift blame away from the rapists. When one speaks of the rape of Hindu women, none of the clergy speaks up because their racism is at play here. After all, a Hindu in Pakistan has “freedom to practise their religion” only on the constitutional paper that no one cares for. If one is a Sindhi from rural Sindh, poor and Hindu, then everything gets played against him or her because Pakistan doesn’t care for anything which is not ‘sexy’ enough to be portrayed on television, even if one protests massively.

Rapes of Children in Umerkot

In Umerkot, there were several protests against rape throughout the month of December but they received little to no coverage. One latest episode of rape was of two girls — aged 6 and 14 — from Hindu families in rural Sindh who were robbed of their childhood and humanity. The rapes were not the first of their kind and were allegedly done by those in power.

Sindhi Hindus have been targeted with sexual violence for quite sometime now — and they have been repeatedly silenced by those in the corridors of power. Rinkle, Asha, Manisha, Kasturi are some of the many names which have reached out to display the ugly truth but have been continuously silenced. Yet, those within the leading government responsible in silencing survivor’s and their rape apologists have the audacity to talk about women’s rights.

If there were officials involved in protecting the rapists because rapists might be political workers, then perhaps it was their feudal and political right to oppress the people of Sindh. The pseudo-liberal won’t say anything because calling out the rapists and demanding justice is defamation of ‘democracy’ and the victims have a political agenda. For democracy, our pseudo-liberals forget that people have a right to hold every leading political party accountable. For some feudals, it is an easy way to exploit women and then justify it by sending pseudo-liberals to be their doormats — obviously they own the lands and everything that comes with it.

In 2010, the Asian Human Rights Commission said that some 20 to 25 Hindu women are forcibly converted and sexually assaulted every month. Though the Sindhi news media is very effective in reporting this, Urdu and English news media is not, perhaps because it considers it more important to talk about rape in Egypt, Syria and India, rather than what is happening to ethnic minorities in Pakistan.

The Umerkot rape victims face terrible difficulties; they have not received proper treatment for their sexual assaults and currently lie in local hospitals. Their families are being denied justice every day. And then our Pakistani pseudo-elites act surprised when there is mass Hindu migration from Sindh.

The 6yr old survivor from the Umerkot family has been forced into compromise with the alleged rapist after immense political pressure to drop their case. They have been compensated in the form of money, although the sections in FIR are a non-compoundable offence, - but they made it out of court. The victim's party may not appear in the court at any stage. Meaning that the survivor’s rape will never be openly acknowledged and the influential rapist is once again free to roam the streets for his next prey.

Speak Out Against Child Sexual Abuse in Pakistan

Disclaimer: Views here are those of the author and do not necessarily reflect an official vew-point of The Safeworld International Foundation.