Racism at Canadian Night Club: 'Go Home & Get a Deodorant' - Bouncer Told Me 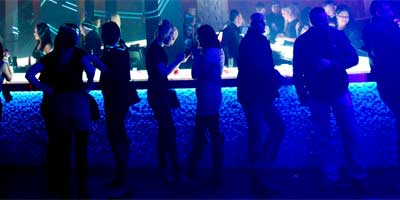 By Ayesha Asghar - republished from BlogHer. May 2013

I was the only woman of colour in that whole place when this incident took place. Trust me when I say this, this was absolutely disgusting; so this is what I ended up writing to the owner of the establishment, Lang Freeman.

Last night, [May 10th] was the second time I visited Club Aria and before that I used to be more or less regular person at Splice but this is one of the most ridiculous things that happened to me tonight.

Just before we start off with the conversation, I usually go dancing but I never drink. I have never touched alcohol. I think most North American do drink but I grew up as Muslim, and I like to preserve that part of tradition where we dont consume alcohol aka I have never consumed alcohol in my life.

"I dont know if its a cultural thing for you people but East Indian people like yourself...."

"How East Indian people have a cultural odour problem.."

Other than that certain assumptions were made about my personal hygiene, which were unsubstantiated on one hand, and were stated as racist stereotypes about an ethnicity that I was assumed to be.

He further added that the reason he was doing this because the "guests" who were less than ten on the dance floor before midnight, complained about the "odour".

At that point I was fuming in rage as I have never been dealt by anyone in such a racist and disrespectful manner at any business or establishment.

First of all, I am Pakistani and second of all, thank you for not noticing as I stood there in rain trying to digest what was sent my way when I was not remotely anything as such.

I was told by this bouncer that "I should go home and get a deodorant" and I told him that I would rather leave cos this is absolutely disgusting.

This bouncer was just one step away from saying, "Oh you are brown and because this is a white space, you should leave"

Rather than that they choose to make this huge elaborate story about "hygiene" & racial stereotypes cos obviously it is so easy to do so and I am sure they have got away with it in the past.

I was alone and the only woman of colour in that whole place when this incident took place.

Rest assured I won't be spending my money at this club ever again. I am not sure if you care about racism by your staff towards your customers but I find it highly repulsive and I am reporting Club Aria to all the appropriate reporting authorities.

Addendum: May 13 - This is what the disaster management of shitty club does, when they can't respond they turn you into a drunk without conducting investigation as in speaking with their staff or even their CCTV footage. I have never touched alcohol in my life. I didnt grew up with alcohol and I dont keep it in my home and I dont drink it with my friends:-

"Friday Night Blow Up" Facebook pics show lots of drinking but nothing about "me" or diversity that the owners claim.

May 14 -  Statement which I recieved from Aria's owner

According to them, I have gone from "drunk" to "drunk-like", hello abstainer here, never did/do drugs, alcohol and all that jazz not even a cigarette

This is what I wrote them back:

"No Sir, this correspondence is not over, I was dancing on my own, and I was not harming anyone. I have never had drink in my life and I was not drunk.

Your bouncer ......, explicity told me that "I need to go and get a deoadrant" and "East Indian people have an odour problem"

I told him that I would rather leave because this was despicable.

I saw the statement Club Aria released to Chex TV that "I was drunk" and "we have not interviewed the bouncer", well great to see your prejudice right there.

I am taking you to Human Rights Tribunal and I do not care if I get anything out of it.