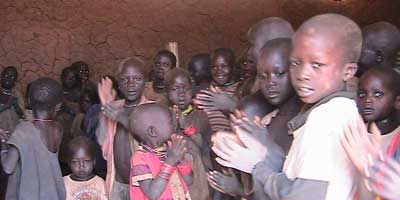 In Uganda, once out of the city, you soon lose the luxury of tarmaced roads. Our journey from Soroti to the borders of Sudan seemed one endless, dusty, dirt road.

An experienced driver and a good vehicle was essential. A driver with bullet-wounds, we were later to find out, was reassuring...

In August 2009, I was in Uganda visiting women's groups. It all started because I had read a letter on the internet a year before from a group of women in Kaabong, Karamoja. A friend in the UK whose family was from the country helped me organise my visit.

During the visit I travelled to different parts of the country. From the urban mayhem of the capital, Kampala, to Bunyoro on the border of DR Congo, to Kaabong, a warrior region near the borders of Sudan and Keyna.

The journey we were undertaking was a trip into the unknown and one we had been advised on many occasions not to take. Apart from vague rumours of kidnappings, carjacking, cattle rustling and rape, nobody had been specific about the dangers but United Nations vehicles travelled with armed escorts. At the hotel in Soroti fellow guests, from the British Army, said they weren't allowed to go there.

Background to Kaabong
by Helen from Soroti

"I know Kaabong district, my mother's village is not far from it. The occupants are called Karamojongo's and that's their language. The hightest percentage of them are illiterate, they especially depend on cattle keeping, and they do anything even kill for their cattle.

They are famous in Uganda for cattle rustIing, their environment is almost unliveable. Their land is dry, dusty, hot, dirty, below poverty line, no power or running water, and yet they produce many children due to illiteracy.

They are violent and the government of Uganda has for so long been trying to disarm them with little success. To them these arms are for self and cattle protection, their most treasured assets. Women come second in priority to these people, a man with many wives and children is considered very wealthy and an elder in society.

Traditionally (still praticed in very remote societies) these women are raped into marriage, once you have been abused you can't go back to your father's house so you go to the man's family and the marriage is arranged. Many heads of cattle up to 300 were paid in pride price.

My grandmother was married with 230."

But we were on a mission to visit Grace from Kaabong and see the work she had spent the last 25 years doing in one of the remotest towns in Uganda. Grace was reassuring. Kaabong is now much-improved, she told us. Grace had been regularly made the journey from Kaabong to Kampala and back, for years.

The wife of an ex army major, Grace had arrived in Kaabong almost by default from one of the lusher areas of Uganda. Kaabong was the home town of her husband but when she first was taken to see the place she was so shocked with what she saw she almost refused to stay.

"People didn't have clothes, boys from the age of 2 were made to look after the cattle, women were raped into marriage."

What Kaabong must have been like 25 years ago I couldn't imagine. My first impressions were of a dry semi arid desert with little or no vegetation as far as the eye could see. If other aspects had improved, the climate certainly hadn't. River beds were dry. There had been no rain at all for 2 years.

But now there was a hospital, two schools, a bar with satellite TV and a guest house of sorts. The Ugandan army were ever-present, in an effort to protect the warring tribes from each other. And there was AWARE Uganda.

AWARE Uganda was Grace's project, established without government help and so far had been off the radar of the NGO's working in the region. But AWARE was Grace's life. Here, she brought the women of the region together. To help them learn new skills such as weaving and craft-making. Often women who had been widowed by AIDS or fighting or cast out from their families because of illness or physical  handicap.

Education is a big thing for Grace and encouraging schooling was an essential part of her efforts to help improve the lives of people living there.

But she had an uphill task, this was tribal Uganda and education played a minor part for those living in the surrounding villages. The goal was to survive and education was not seen as key to survival.

Grace told me about the problems educators faced and the high drop out rates of children. Young boys are, at a very early age, often still put in charge of the grazing cattle and some girls never attend school in the first place & instead may be kept in the homestead, waiting to be married off.

Those that do go to school are not expected, by the families, to stay.

The schools at Kaabong, though, did have an energy about them. The staff were obviously dedicated and trying their hardest. There was a special emphasis about stopping violence and trying to change perceptions about girls.

But violence was never far from the surface. Just the day before, a man had been shot and killed just outside the school fence. We were told he was from the neighbouring tribe and had come to spy on the cattle owned by the Kaabong tribes.

He'd been shot by local tribesmen and we were told the body had been devoured by birds. Life is still cheap in Kaabong.

Families living outside the army's 'safety zone' protect their homesteads with a maze of brushwood; hut floors are sunk down so that bullets can't so easily be fired in. Girls rarely get beyond the fences and school is out of the question.

HOPE IN THE DESERT

Despite everything. Despite the drought which was ruining the orchard that Grace's women had so lovingly tended for years. Despite the violence hovering under the surface. Despite the reality that if you were born in Kaabong you would probably never leave. There was hope.

Hope was there in the young boy we met who was studying a book about computers although he had never seen one.

There was hope in the eyes of the dancing theatre group who went round the villages raising AIDS awareness.

Hope in the smile of a young disabled mother, waiting for her first home which the AWARE Uganda team were building for her.

And there was hope in the little children of Kaabong, looking at me with eyes full of innocence and wonder.

May be we had been naive in making the journey to this wild, remote place. But for some, they have no choice but to be here.

As we were leaving the local school we went to the classroom of some of the youngest. They had a special present for us.

One I will never forget

Welcome to the Children of Kaabong

AWARE Uganda, works to help the children of Kaabong