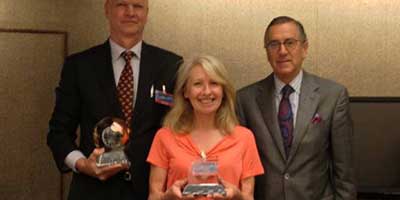 “If the Nobel Society had an award for sustainability, it would resemble the Katerva Awards, a new international prize for the most promising ideas and efforts to advance the planet toward sustainability.”

On 2nd July 2013, Chris Crowstaff, founder of Safe World for Women, received a Katerva Award for the initiative to promote grassroots women's groups.

The award was presented at the United Nations offices in Geneva by Ambassador Néstor Osorio of Colombia - President of the Economic and Social Council (ECOSOC).

Chris dedicated the award to women human rights defenders throughout the world, and particularly to Farida Afridi, co-founder of SAWERA, a grassroots organisation working for women's rights and education in the tribal regions of Pakistan. Farida was tragically murdered on 4th July 2012, on her way to work at the SAWERA office in Peshawar.

Safe World video shown at the United Nations, as introduction to Chris's speech:

"Unlike the elderly widow I spoke to in Uganda, I've seen unbelievable changes in my own lifetime.

I remember in 1972 my dad coming home from his work with a 'teletype', a new piece of technology which he connected to our telephone so that he could use his computer, or rather so that his computer could type on his teletype at home. The computer was 11 miles away at the Philips office in Croydon.

Four decades later, I'm able to live in rural England and work with volunteers - we're all volunteers - all over the world, who I've never met.

Working Together Across the Globe

A huge landmark for me today, as well as to be here to be able to talk about the grassroots groups we represent, also is that I've met, finally met, our Field Partners Manager who I've been working with for the last three years - Jen Timmons - all the way from the USA. We met this morning, after emailing each other for three years - several emails every day.

The potential to connect with grassroots organisations is phenomenal.

Through our website and our extensive social media networks, and now through coming here, we are able to give a voice to grassroots women and especially grassroots women's groups.

They are already making hugely effective changes and often they don't have a website. Often people don't know about them. So we are passionate about raising their profiles.

I just want to talk to you a bit about what they're doing.

For example, women in the mountain villages of Eastern D.R. Congo such as you saw in the video have no internet, no infrastructure, not even roads.

Mugisho and Bahati, who you just saw, walk up to the mountain villages to talk to the people there. They walk back down again - and back home where they have got internet - and bring us news which we then publish.

So those mountain women now have a voice. And they know they have. And they appreciate it more than anyone can say.

Mugisho and Bahati, with their organisation COFAPRI, provide these women with small animals. This is very small scale and this is self-funded. But they provide them with guinea-pigs, sometimes with small pigs and chickens.

This means that the women have better nutrition, and their children. It means that they can provide small micro-income for themselves. It also helps to regenerate the eroded mountain soil.

So simple solutions when they're driven from the grassroots can be massively effective. And they know themselves what is needed.

They also teach them sewing skills and, importantly, they also re-educate them about the real causes of HIV - because, quite apart from the cost of going to hospital to get treatment, they need also to actually be persuaded that treatment is needed. Because there are all sorts of traditional myths about the causes of diseases, and particularly HIV, which means that even if treatment is available they will not go for it. But they will listen to other people from their own region who they respect.

Women in rural Cameroon are learning about their rights from text messages sent from an organisation in Cameroon. Women and men in Cameroon are getting text messages asking them to take a pledge not to be violent against women. And it's working. They're getting very positive feedback. They've had no complaints about spam and are only getting positive feedback. And one guy even said that he had been considering being violent against his partner that evening because he was feeling really angry with her. But the message made all the difference.

This is happening because, three years ago in Cameroon, a student - Zoneziwoh Mbondgulo - walked into an internet cafe, found our online community, and was inspired to set up a group - WFAC Buea. The group has now been re-named WFAC Cameroon, to reflect the amount it's grown.

In Nigeria, women are learning about maternal health and reproductive rights - from a team of doctors with the Brown Button Foundation, founded by Nigerian lawyer, Adepeju Jaiyeoba.

In Ogun State, in northern Nigeria, one of the poorest states in Nigeria, Brown Button Foundation is piloting a telephone advisory service whereby women can talk to a doctor on the telephone for maternal health advice and reproductive health advice.

They are managing to work with local schools, with local boda-boda drivers - which are like the motorbike taxis, and with the help of the local communities.

In addition, they have also received small amounts of funding to build local water sources, which means children don't have to walk miles to collect the water.

In Afghanistan, Young Women for Change - an Afghan women's organisation, has set up the first women-only internet cafe in Kabul.

As you saw on the video, on the Thai-Burma border, an organisation called WEAVE Women - the women refugees they work with are making handcrafts which WEAVE are able to sell all round the world.

And our first Field Partner, AWARE Uganda, in a remote warrior region of Karamoja, who I visited back in 2009, a year later received an award from President Museveni for their work raising awareness about HIV and they were very recently presented with a tractor by the First Lady.

When I visited AWARE Uganda, although they'd been there for over 20 years and had over 250 members, I met by chance in the guest-house I were staying in Kaabong women representatives from the United Nations and Oxfam, and they did not know about AWARE Uganda.

In fact they did not know about any local grassroots organisations, because asked them if they wanted to know.

And so I introduced them. Grace Loumo, the founder of AWARE Uganda was of course very pleased and so were the representatives. They really wanted to connect with the grassroots. And Grace Loumo was then invited to the NGO meetings which took place every week in the local hospital. And they wanted to have someone from the grassroots there. And if they'd had a website, they would probably have already known about them.

The Importance of Grassroots Women's Groups

What's absolutely crucial is that, in all these cases, and many more cases - all of what they're doing, all of what's happening now, is possible, all of what these groups are doing is possible because they have got the support and enthusiasm of their local communities. They are from the local communities. They are led by people - especially women - from the same background. From the same culture.

It's so much more effective than some group coming from outside and trying to offer help. Because the level of respect, the level of engagement, is absolutely huge.

And, crucially, these women feel empowered because they are totally involved in the whole process. They are consulted. And men. And children. They see tangible results which they by themselves are bringing about.

So our grassroots work is actually about simply telling people what these groups are doing and we'd like to expand this throughout the whole world.

At the moment we have Field Partners in Africa and Asia. Obviously there are many more regions we'd like to expand this to.

And finally, I'd like to thank Katerva for enabling me to be here to talk about these groups.

Our vision is that what Katerva has done for us, and these awesome groups you've just seen, we will be able to do for grassroots women's groups.

And that, one day in the not too distant future, they will be here to talk for themselves instead of me talking for them. "

Following the presentation, there was a press conference

The press conference was introduced by H.E. Mr. Martin Sajdik, Vice-President of ECOSOC and Austrian Ambassador to the United Nations:

"This year’s theme of the Annual Ministerial Review of the ECOSOC, “Science, technology and innovation, and the potential of culture, for promoting sustainable development and achieving the MDGs” coincides perfectly with what the Katerva Awards are promoting...

The Katerva Awards Peoples’ Choice Winner deals with an issue of high importance to the ECOSOC, Austria and I: women’s empowerment.

Safe World for Women, a women-led NGO and advocacy organization, uses the potential of internet technology to enable networking and collaboration around the world by working with grassroots groups to promote women’s empowerment and sustainable development to tackle the root causes of poverty – the central theme of the Millennium Development Goals.

The Safe World for Women platform can be used by funders, donors, philanthropists, and social investors who have the resources to support sustainable projects that can serve as good models for future initiatives.

These and the other Katerva winners are exactly what we need to see more of, to face the challenges in the areas of health, food security and energy security not to mention water availability.

Science, technology and innovation and the scaling up of new solutions will be critical to addressing these challenges. As will, managing existing technology and non-technological innovation.

National and international policies, including intellectual property systems, need to adapt to this evolving environment and address the special needs of different countries, especially the least developed countries (LDCs). This AMR we hope will help to create a contribution that will be picked up and amplified in the development of the Post-2015 development agenda"