What do we want for our daughters? 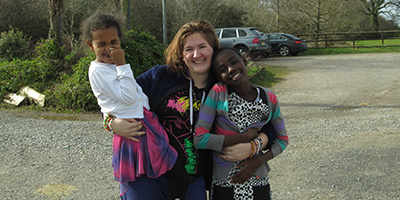 My daughter with friends from AWARE Uganda.
I originally connected with AWARE Uganda via an internet contact, in 2009. I visited AWARE Uganda the same summer. The group works with women and children in the warrior regions of Karamoja. These two lovely girls are grand-daughter and great-niece of the founder, Grace Loumo.

July 3rd is my daughter's sixteenth birthday - I ask myself: what do I most want for her? I guess the same as any parent would wish for...
A safe and happy world.

So it is both emotional and symbolic that, on her birthday, I've been invited to a prestigious event in London because Safe World for Women has been shortlisted for a 'Doing Good Online' internet award.

With the advance of the internet, the world gets smaller by the day. We need to view ourselves as global citizens and international players in the global community. In fact, using the internet to connect with other people throughout the world, this is inevitable.

It is for this reason that I set up Safe World for Women, six years ago. (Originally called Women for a Change).

Through our work on the internet, I have come to know many daughters, sons and parents personally. I care about them as a big extended family. The Safe World family. 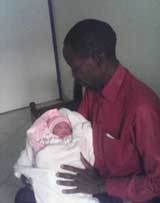 Mugisho, founder of COFAPRI, with baby Bethel born on Father's Day 2014On Sunday - Father's Day - a baby daughter was born to our Congolese friends, husband and wife team Mugisho and Bahati, founders of our Field Partner in DR Congo - COFAPRI. Bethel's birth was a big online celebration!

The internet can truly open up our world. Members of COFAPRI do not have access to the internet. But we still feel we know them personally because Bahati and Mugisho are able to bring us news from the rural mountain villages in which they work - news from rape survivors, children born of rape, those who have been victims of conflict - directly or indirectly.

And that is one example. Our extended family reaches out to the the slums of Nairobi, Tanzania and Sierra Leone, the warrior regions of north east Uganda, the tribal regions of Pakistan, to the refugee camps on the Thai-Burma border and earthquake shaken villages of Peru.

Strong bonds are formed and virtual bridges are built.

"I personally want for my daughters a safe world, a world where they can say, our parents have worked, a world where they will feel respected, and valued in everything they can do. If we can be doing things our children will never ever enjoy, better stop. We have to make a way for them, to build a foundation for their future.
Our daughters have the rights to use the internet for development, as boys do. We have to seek means to involve them in this."
Mugisho Theophile - founder of COFAPRI in DR Congo, and father of Bethel.

I have no doubt that the internet can be used as a tool for good. To break down barriers, destroy cultural sterotypes, build trust and understanding. And I feel that women are naturally inclined towards cooperating, communicating, nurturing and empathy (this is in fact also supported by scientific research - if we need proof!). Actually I prefer to talk in terms of feminine and masculine. I believe that these values are what the world terms 'feminine' values - and I doubt that many would deny that they are in short supply in today's world!

It seems to me that, too often, for women (and men) to get into positions of influence, 'masculine' values are needed: competitiveness, selfishness, forcefulness, even aggession.

Actually I don't mean these as negative values. I believe the world needs a balance. And for the last few hundred or thousand years, much of the world has been hugely out of balance. If anything, I really do feel that there is progress. And I mean progress in our understanding of each other. I feel hopeful. Otherwise I would not be doing what I'm doing.

So I set up our organisation to maximise the positive potential of the internet to amplify women's voices. To connect us with each other, towards a shared vision and aim. And the men who support us.

In particular, I wanted to amplify the voices of those who are least heard.

And that means women. Most of all, women at the grassroots level in developing countries.

And so it is very timely that, on my daughter's sixteenth birthday, I have been invited to London to a major award ceremony:

The Nominet Internet Awards (NIA), now in its eighth year, celebrate the UK internet as a force for good and showcase the very best Britain has to offer online.
Guardian Media Network