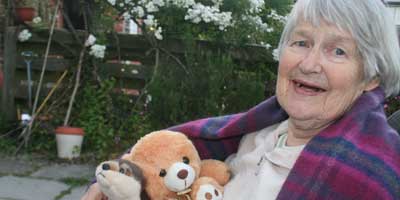 Reading about Alzheimer's, it looks as though the condition progresses in a series of clear-cut stages, starting with a bit of confusion and then at some point the sufferer doesn't recognise even close relatives.

I'm already beginning to realise, a week after my mum's diagnosis, that it's not that simple.

I was sort of thinking that there'd be a devastating day, in a few year's time, when my mum stopped recognising me and would then never know who I am again. Maybe that is how it happens sometimes - but not with Mum.

On Tuesday, less than a week after her diagnosis, Mum didn't know who I was.

On Tuesday evening, Mum said she was worried where my dad had gone. She said he'd gone out and not come back again. After trying to make sure she was definitely talking about my dad, I tried to gently explain that he passed away several years ago. Mum said she didn't believe me and that we'd never buried him.

Telling Mum that my dad had died was the hardest thing I've ever done. Also I'd not been at all prepared for this. I was expecting that it might happen at some future time. But not so soon.... It took me by surprise and I was in shock.

Not the first shock I've had of course. Six months ago, Mum told me on the phone that she got out of bed and found her brother having breakfast in her house with our daughter. Though in fact her brother was at his home in Austria and our daughter was in our house.

But this was definitely a bigger shock. And by definition one doesn't expect a shock - because then it's not a shock. More was to follow.

Naturally, I went straight to Mum's house (just over half an hour away by car, so long as the roads are fairly clear). Our daughter kindly came with us, as Mum always finds her reassuring and cheering.

So the second shock of the evening - Mum greeted us by complaining that 'Chris' had been telling her that Dad was still alive. So double-shock. One, Mum didn't realise I was Chris. Two, she thought I'd told her Dad was still alive. That said, it was actually a huge relief that she realised Dad had passed away. In comparison, the shock that she didn't realise who I was (and that she was complaining about me) was not so bad. Though I was very relieved our daughter was with me for emotional support.

I intuitively felt not to bring Mum home with me that day, in case it added to her confusion. She was happy to stay in her bungalow though was concerned that we should take 'Chris' home with us, who she thought was visiting her neighbours. I did try, after she had calmed down, to explain to her that I am Chris. She was rather surprised about that - thinking I looked too old to be her daughter. And then promptly reverted to talking to us again about 'Chris'.

The following day, we brought Mum over to our house. Always a bit risky, as she fell down our stairs a few weeks ago and, in addition, changing location adds to her confusion.

I just feel heartbroken we don't already have her 'granny annex' built here - a ground floor extension that we've spent the last year trying to persuade Mum that she might need. And I'm also remorseful that we didn't persuade Mum to have a brain scan several months ago. That said, it's impossibly hard to tell one's mother that she needs a memory test, brain scan, and to prepare for when she's less independent - i.e. to think about a granny annex.

She so loves being with us now and so loves thinking of this as her home, that I feel cruel whenever I take her back to her bungalow.

The Social Services six week 'emergency care package' (following Mum's fall down our stairs) finished on Wednesday. Not that they were able to do much for her, as they can't force anyone to have help and Mum apparently declined help. But it was reassuring to know that someone was looking in on her two or three times a day, and had access to her home.

Though in fact that may also have been part of the reason for her increased confusion. I would feel confused if strangers appeared in my house, even when I was in bed, to see if I was OK.

So the next stage may be to pay for carers to take over from social services - but they will still be people she doesn't know. Actually our son has a few weeks between volunteering jobs, so he has kindly offered to live with Mum for a while - which does seem like the best solution for now.

Anyway, to get back to my point that Mum's condition is not developing in clear-cut stages....

Since being back with us in our house, Mum definitely knows who I am. Good nutrition and a simple life seem to help - not so surprisingly.

Following the diagnosis, I have of course been researching food etc which might possibly help. I'm a big believer in food as medicine. Why didn't I do this before? Actually I felt sure that the brain scan would show that Mum had some signs of vascular dementia - some blood clots. Her dad suffered some major strokes, to the extent that he couldn't identify his family. And, by age 78, people are likely to have had at least some minor vascular occlusions - blockages in the veins in the brain.

So I hadn't really read up about Alzheimer's, to be honest.

The main physiological problems associated with Alzheimer's, it seems, are that the neurotransmitters in the brain become less effective. Basically the nerves which store information become less able to communicate with each other. Not surprising, considering the complexity of the brain.

One of the main chemicals which is responsible for communicating in the brain is called acetylcholine. Acetylcholine is produced in the body from 'precursers' including choline. An additional complexity is that, with old age and especially Alzheimer's, a plaque accumulates which prevents the transmission of the neurotransmitters.

Mum has been prescribed a drug to help with all this, which she is about to start on. But I think that good food can also help and certainly not do any harm! So I have been givng Mum egg-based foods (egg yolk is high in choline), along with fresh organic sage and rosemary from our garden - also possibly helpful for improving nerve transmission and reducing the effects of Alzheimer's.

My mum doesn't cook (which I am relieved about, for safety reasons), but she tends to live on high-sugar foods which are thought to be especially detrimental to people with Alzheimer's.

However, when I buy fruit for Mum, she will happily feast on red grapes etc. I intuitively felt that red grapes would be good for her and I find, on resesarching, several studies showing that red grapes may well in fact help with Alzheimer's, by in effect I think helping with oxidation - and especially regarding the hippocampus which is the part of the brain which connects the logical and intuitive sides: 'results suggest that there are active ingredients in red grape juice, which probably have therapeutic and preventive effects on cognitive impairments in Alzheimer's disease' [US National Library of Medicine National Institutes of Health].
Actually, studies also show that red wine can help!

As well as 'let food be your medicine', I'm also fond of the quote 'A joyful heart is good medicine, But a broken spirit dries up the bones.'

So today we took Mum, together with my father-in-law (who has vascular dementia), out for lunch and then on a car journey to a local airfield and beauty spot - for a cup of tea and cakes - where they happily watched little aeroplanes taking off and landing. Mum packed her bag, as usual, for the outing. This time the total contents were two 'Dr Dolittle' books, from my childhood, which provided very entertaining conversation over lunch and we all enjoyed.

We were out for a few hours and, by the time we were on our way home again, Mum thought we were driving around the hills where we lived when I was little. She didn't recognise our cottage when we got back home. But she is happy, which I feel sure is the main thing, and she was relaxed about being gently reminded where we were.

The future is always uncertain and especially so with Alzheimers. But one thing is certain - there's much still to learn in this journey called life...