Alzheimer's - Looking on the Bright Side 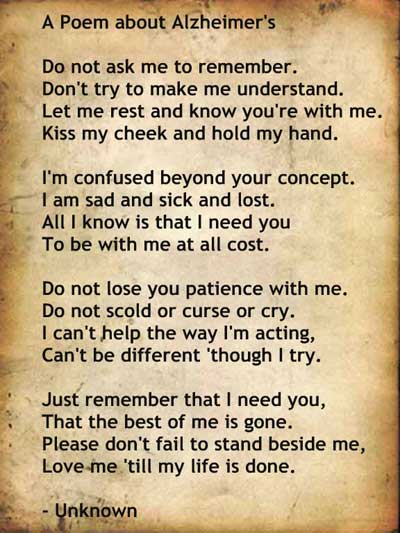 I find this poem helpful - though it brings tears to my eyes. It touches a loving place in my heart, which somehow puts life - and everything I do - into perspective.

OK this is relatively early stages but, at the moment, it is still possible for me to see Alzheimer's in a positive light, at times.

Mum has presumably had Alzheimer's for a lot longer than any of the family realised (we only received the diagnosis a few weeks ago).

In hindsight, I can see that Mum has been showing symptoms for several years.

Several years during which I've been impatient with her at times, even angry for her apparent confusion - for example, reluctant to come over for a planned birthday meal or Christmas celebrations.

Mum actually doesn't remember me getting angry with her.

We also look after my 93-year-old father-in-law who has vascular dementia. And likewise he tends to quickly forget if we show frustration with him.

Of course, we feel bad when we become irritable. But neither Mum nor Dad remember it. Which is a relief. And we actually have sort of become accustomed to it.... To the extent that we sometimes almost forget that other people do remember things, which is more worrying!

Mum and Dad are easily pleased. A day out. A nice meal. Walking around the garden.

And they help us forget our egos. They might recognise a present, remember a nice time, but not who gave it to them or took them out.

It is said that people with Alzheimer's are more sensitive to facial expressions, emotions, than they are to actual words and events. So conveying and feeling love becomes even more important.

A friend told us a story which I think is, in a way, beautiful. His friends had to take their mother for various hospital appointments in one day, during which she was sometimes screaming with anxiety. However, at the end of the day she seemed to have forgotten her anxiety and remembered only their love, for she thanked them sincerely for a lovely day out.

Similarly, when we took my mum for her brain scan in May, it was our wedding anniversary. So, after Mum's brain scan, we took her for a meal. It was a lovely sunny day and we sat outside. She thoroughly enjoyed her meal and promptly totally forgot her hospital visit. Likewise, she has totally forgotten that she fell down our stairs in April, that we were quite freaked and scared, called out the paramedics in the middle of the night, were up till dawn wiping blood from the carpet and walls, and she was immobilised for about a week.

It is sadly ironic that Alzheimer's almost inevitably results in the sufferer being cared for by people they hardly know, when their memory is so vague.

Even if family are on hand, outside care is of course also often needed.

Following Mum's fall downstairs, she was provided with a 'care package' from social services, which involved someone letting themselves into her home three times a day for a few weeks. This was not always the same person and of course, lovely though they were, they were different people, who Mum did not know. And they had access to her home. Usually, for the evening visit, she was already in bed.

Even the most sane of us would feel freaked by strangers letting themselves into our home when we had just got out of bed in the morning, or after we'd gone to bed in the evening. Much worse, of course, with Alzheimer's.

Thankfully, our lovely son (who is in between volunteering roles as a WWOOFer) has been living with Mum since the social services care package finished a couple of weeks ago. It's not actually that Mum can't afford to pay for private care - more that she's so relieved and thankful to have familiar family faces around her, rather than strangers. It might also be the homeopathy and nutritional supplements (prescribed to her by a qualified medical doctor) but there has been a marked improvemet. And she hasn't even started on her orthodox medicine for Alzheimer's (it is contraindicated with heart problems, so we are awaiting a check up on that).

Our daughter went to the beach for a few hours and left Grandma with a meal. Mum is happy so long as she feels loved like this.When our son has a much-needed respite break, either our daughter goes to stay with Mum or else Mum comes to stay with us.

The main thing is that, all the time, she feels surrounded by family and love. She says that over and over.

I can sense that Mum is anxious. She has always been a very sociable person but she is visibly nervous in company nowadays, if family are not with her. She tells me that she gets frustrated with her brain.

Mum is always happy when surrounded by family.Mum is also nervous in unfamiliar situations. Last weekend, we took her to the seaside. She was so happy. But I tried leaving her on the beach for five minutes, while checking on my husband Andrew and his dad. Our daughter was in the sea near Mum. Mum was happy about me leaving her there. But a couple of minutes later, she looked like she was about to join our daughter in the sea - though fully-clothed and actually also very rough waves, hence I even forgot to take photos.

Likewise, every time I take her to a public toilets, I have to be there waiting for her to come out, otherwise she feels very lost and asks people where I am.

I'm relieved that at least Mum does seem to now know there's something amiss and is not over-confident.

And, looking on the bright side, love is shining through.