Where is Daddy? Alzheimer's and Bereavement 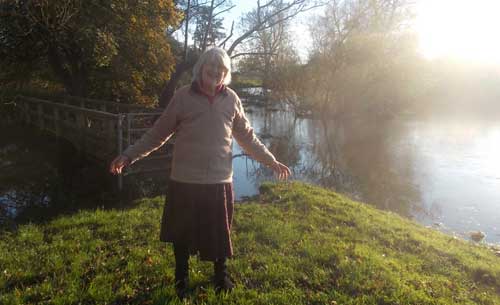 Alzheimer's Disease is full of surprises

Everyone around is almost forced to lose any sense of identity.

We start to ask ourselves questions about reality. Till we might feel that the condition is, in some way, contagious (even Mum's medical doctor agrees with that!).

I have limited experience of Alzheimer's Disease and I'm sure everyone's experience is different.

But if there is one common factor, I feel that Alzheimer's in a way reveals the 'real' personality.

There is no facade left, to hide behind. To an extent, ego is connected with memory. With loss of memory, self-identity becomes harder.

One's mental state becomes almost unrelated to events. Happiness is no longer defined by what's happening, or to past events.

It can be like Christmas celebrations over and over. Mum's been expecting Christmas any day now for several weeks.

'Are You in Touch with Dad?'

Disturbingly, Mum frequently asks where my dad is and if I've been in contact with him. She says he's living the other side of town and that she'd quite like to be in touch with him again. Actually he passed away six years ago, with a tormenting long-term disease which caused him to suffer brain tumours and depression. Mum was his carer for years.

Occasionally, I try to explain to Mum that Dad is dead. Because may be it's kinder for her know the truth - that he loved her very much and then died - than for her to think that my dad left her for another woman and family.  But, when I try to tell her that he died and that his grave is in the churchyard down the road, she gets very upset indeed, thinking that no-one told her he died.

So most times the better option seems to be to let her think that he left her for another woman and family, is still around in the town but doesn't want to be in touch with us.

That is of course heartbreaking for me....

But Mum seems happier that I just agree with her.

One modern technique, with Alzheimer's Disease, is to agree to whatever the 'sufferer' says.

That might possibly be 'good' for the sufferer, but I'm not sure that takes into account the feelings and sanity of the carers.

When my brother arrives and Mum thinks he's her own brother, should he go along with that or explain that he's her son?

When my mum thinks I'm her sister, what to say..?

When our son (who lives with my mum) has to cope with Christmas again and again, from October, is that good for him?

When my mum, from time to time, says she's disappointed that my dad left her for another family (when, in fact, he loved her dearly and then died), is it helpful if I agree? And also what does it do for my own mental health?

I, of course, have witnessed my dad dying from a terrible illness and then my mum gradually losing her sense of identity - which is a sort of double bereavement, even without taking into account that my mum thinks my dad is still alive. And then I almost believe that my dad is still around - and so sort of preparing yet again for his passing.

But is There Actually any Problem?

The bottom line is that my mum is happy and caring.
(Though I do wonder where her suspicion and mistrust about men comes from.)

Mum spends hours, when with us, washing our dishes and cleaning our floors, asking if we need anything for our winter coughs and colds, and thinking about Christmas.

She loves coming with me for walks and also coming out with the family for a meal.

When we take her out, people tell uis they don't see anything wrong.