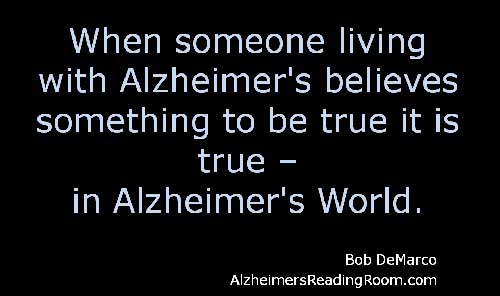 There is no clear path for Alzheimer's Disease.

And therefore no clear rules. No obvious 'do's' and 'don't's' that can be applied.

No one day is the same as another.

We're learning to be more and more flexible in our responses to Mum.

The last few weeks, my mum had been under the impression that my dad had left her and was living with another family.

I found that incredibly sad, of course, because in reality he passed away in 2008, just after Christmas. He was a faithful husband.

One modern theory about dealing with Alzheimer's sufferers is to try not to contradict them. So, a few weeks ago, when Mum started asking me if I'd seen Dad recently, I'd try to find some illusive answer which wasn't a total lie but also wasn't contradicting her.

Last week, Mum seemed particularly lucid so, when she asked me if I knew where my dad is, I gently explained to her that he loved her very much but had passed away and that she had known that - but that she'd probably blocked out the memory because it was a very traumatic time.

She seemed to accept the situation and also seemed a bit relieved to be told that he hadn't abandoned her. I suggested that we should go visit Dad's grave together soon. Mum remembered that she used to go and visit it and she thought it would be a nice idea to take something along to the grave for Christmas.

Christmas has often been a hard time for my mum, since my dad died. In hindsight, I can see possible symptoms of Alzheimer's even the first Christmas after she'd been widowed. We'd arranged to collect her on Christmas Eve to bring her over. When we arrived, she seemed to have forgotten we were coming and became irate at the idea of going anywhere for Christmas, though it would have meant her spending Christmas alone. We couldn't persuade her to come with us so we returned home without her. We came back on Christmas day and she was more relaxed and returned with us.

That was six years ago now. Last December, Mum seemed to suddenly deteriorate and that was the first time we noticed real confusion and delusions. In January, we began the process of memory tests and assessments.

It was just this last summer that Mum was diagnosed with Alzheimer's Disease.

Nowadays, Mum comes to stay with us for a few days each week and the other half of the week she lives in her bungalow with our son. Last weekend, our youngsters had both been in my mum's house tidying and generally de-cluttering, while Mum was with us. That also seemed to help her to feel clearer in her head and she was a lot better that subsequent week.

Indeed, yesterday, when Mum was back here with us again, she seemed to have totally forgotten her obsession with the idea that Dad had left her and was living somewhere else. Which I was glad about.

However, suddenly we realised that, quite the opposite to Mum thinking Dad had abandoned her and moved away, she thought that my dad was in her home waiting for her to get his supper and said she needed to go straight home again.

This was a new situation. We took some deep breaths and considered how to react. She was obviously very anxious and it didn't seem the right time to try and explain to her again that he was dead. She was convinced he was in her home when she left an hour ago. I tried to reassure her that Dad didn't mind her being here. But she said I couldn't possibly know that. I made a slight attempt at saying she'd forgotten that he'd passed away but then my usually calm and cheerful Mum became angry and almost hysterical.

I thought it might possibly be helpful if she spoke to another family member, even if just to give her a different focus. So I got her to speak to her sister on the phone. I thought Mum might be more likely to take notice of her sister rather than her daughter (though admitedly she does get us muddled up). Unfortunately, Mum was fixated with the idea that she'd got to go home and feed my dad. To the extent that, when her sister did try to explain that my dad had passed away, Mum became furious with her - saying that she'd got it wrong and it must have been another man because Dad was in her house.

As you can imagine, by now we were a bit desperate. Wondering whether to take Mum home so she could see for herself that Dad wasn't there. But of course that might have upset her further. It was already late in the evening and, in addition, the idea is that our son has a bit of respite for a few days each week while Mum is with us.

It obviously wasn't working, at this time, to explain the reality to Mum. From what she was saying, it seemed that she was happy to be with us so long as Dad didn't mind. And the main thing was for Mum to feel calm and relaxed again. So we could only think of one other option...

We messaged our son to ask if he could pretend to be my dad on the phone, which he agreed to. So we phoned him, Mum asked him if he minded her staying with us, he said that would be fine. And that was that. A brief phone call and all was sorted. Mum was very pleased that Dad was so nice and understanding about it and that he didn't mind her being with us after all.

That's what I mean by no rules.

With Mum anyway, each situation is unique from previous situations. Her reality changes unpredictably.

From needing to be gently reassured, at the right moment, that Dad hadn't left her for another family, to agreeing to visit his grave, to needing to be reassured that Dad didn't mind her visiting us.

And each time a different approach was needed.

The common thread being the need to reassure Mum that she is loved, that no-one's trying to upset her, and to do what we can to see that she stays her calm, relaxed and cheerful self.

After writing this, I took Mum out to the shops and for a lovely walk in the winter twilight.

When we got in the car, she apologised to me for getting upset yesterday - so she must have remembered some of it.

She again asked me about Dad and, because she was calmer and more open, I again explained to her that Dad had passed away but that it was quite a traumatic time so her brain had probably blocked out the memory. She again said she remembered visiting his grave several times and that she'd like to go there with me.

However, on the way back home she asked me about Dad again and said she thought he was living with another family somewhere up north. I again tried to say about his grave but she said she found that so hard to believe. And we went round in circles again and eventually I gave up the conversation. They do say that you go round in circles in conversations with Alzheimer's sufferers. That seems to be one consistent fact...

Part 8 - Where is Daddy? Alzheimer's and Bereavement