Christmas as Carers. A different reality. 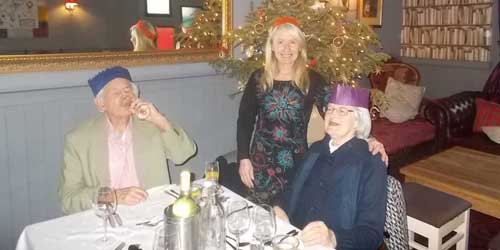 My father-in-law (age 93 and a half) has vascular dementia. My mum has Alzheimer's Disease. It was an interesting Christmas....

Mum had been looking forward to Christmas for months.

I'm not sure that's the right way to describe it. Actually, for months, she's been convinced that Christmas was imminent.

I wasn't sure if that's because she enjoys Christmas or whether it's a hard time for her. (My dad died two days after Christmas, seven years ago. He spent his last Christmas in hospital).

A few weeks ago, we took her to buy some clothes for Christmas which she really enjoyed.
Though, when we got into the changing room, I'd found she was wearing two skirts. She loved the new skirt. But understandably she didn't want to put both her other skirts back on. So we exited the dressing room with Mum wearing one of her skirts, plus me carrying the new skirt and the other skirt she'd been wearing. The staff politely didn't comment.

For my father-in-law, this was his 93rd Christmas.

Every year we think it might be his last one. So we tried to think how to make it special. We decided to take Mum and my father-in-law out for Christmas lunch - just so it would be a bit different to every other day when we cook lunch for him here (and, at weekends, for Mum too).

So Christmas morning (wishing we could stay in bed a bit longer) we said happy Christmas and helped them to dress.

They didn't seem to understand that it was the special day they'd been looking forward to for ages. Andrew's dad and my mum seemed to wonder why there should be any fuss today.

That didn't seem to change when we arrived at the hill-top pub where we'd booked a Christmas meal.

Actually Mum enjoyed the carols on the CD that was being played, and the view out the window (which reminded her of the view of the Welsh hills from her grandparents' home).

To cut a long story short, by the time the sweet course of the meal arrived, Andrew's dad had got into the swing of it too, and was enjoying the occasion.

So was Mum!
Mum is very sociable and I did have to try to stop her going around the tables to talk to everyone. People were very understanding and the family with little children actually seemed visibly relieved that they weren't the only ones worrying about disturbing others.

My father-in-law had gone back to his house next door and was busy reading his electricity bill.

He eventually emerged in the evening for snacks.

We were outside talking with our neighbour. Our neighbour of course wished Dad happy Christmas.

Dad was very surprised, saying that he didn't think Christmas was for another few days yet.

By now, no fault of our parents', we were feeling quite exhausted.

Mum often gets frustrated and tired this time of the evening. My usual solution is to take her to the local shop which she enjoys. But of course the shops were all shut today.
So I managed to persuade her to stay up so we could phone my brother and thank him for the presents.

And now 'Dad' and Mum are both soundly sleeping.
Not so different really to the days when my children were small and I tried to keep them awake so they would sleep well at night.
Except, with the elders, sadly there is not the knowledge that they will grow increasingly independent - rather that they will become more dependent.

Mum has Alzheimer's Disease and 'Dad' has vascular dementia.

Last weekend we called out the paramedics for Dad. He had an abdominal infection which caused him to be dehydrated, extremely confused and weak. It was a scary time.
But of course he bounced back and is now his usual demonstrative self.

For anyone who's never been through a similar experience, it's almost impossible to describe.
Every moment is so precious.

And, though this blog might sound negative we are actually extremely grateful for this experience which is, to say the least, powerful and actually very spiritual too.

Every day is new.

Mum and Dad's 'reality' is different to ours.
We have to tune into their reality.
And they both live in different worlds to each other.

So we have a constant challenge.
But we are learning all the time.

We are also grateful for the few hours after the elders have gone to sleep.
And I'm sure that other carers will understand.

Part 8 - Where is Daddy? Alzheimer's and Bereavement