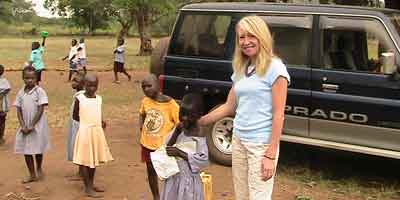 Seven years ago, on the 8th March, I had never even heard of International Women’s Day.
I had never seen the Declaration of Human Rights, or any UN resolutions.

I had a relatively ‘normal’ life, living in my own family world. A busy mum with two excited kids - and I was literally in labour with my third.

My eldest son had just had his ninth birthday and my daughter was soon to be six. She had chosen baby clothes for her new baby brother, sorted out her toys and put some of them in a box for him.

"We are the mothers of the world"
Marianne Williamson

At 3am on the 8th March, 2004, my waters had broken and the midwives were called.

I had hoped it would be a home birth. The children were with me for much of the labour, watching.

By midnight the next night, it was obvious that the baby was stuck. The midwives arranged for me to be taken by ambulance to hospital. I remember them saying that I was literally ‘burning up’. I was in great pain and very feverish.

Following an excruciatingly painful ambulance journey, I was relieved to be in the hospital. I was given an epidural and was in labour for another 5 hours. The baby's heart beat was constantly monitored - though they didn't seem quite sure whether they were actually tracing his heart beat or mine.

As birth grew imminent, they asked whether I wanted to continue with the epidural. I declined and so, as the epidural was eased off, with a final exertion on my part, baby Roderik was born.

Then it was all panic.

Roderik wasn’t breathing and they rushed him off. I was exhausted and drugged. But I managed to grasp that Roderik was a bit ill, which I think is what I was polietly told at the time.

After breakfast (though I thought it was a day later), I realised what they were saying.
Roderik was practically still-born.

He had suffered a severe lack of oxygen for about 10 seconds and his brain wasn’t functioning. Neither were his other internal organs. He was unlikely to survive more a day or two, even with artificial life support. And, if he could be kept alive on life support, he would never develop beyond the stage of a two-month-old baby, at the most.

So for nearly three days, I practically lived in the neonatal unit - sleeping in the room next door to Roderk and spending as much time with him as I could, day and night, though he showed no signs of consciousness or knowing that I was there. No movement at all.

The children came to see their baby brother, but no-one had told them he would die. They had only heard that he was a bit ill. So I had to tell them myself.

My daughter spent a long time holding Roderik, with his cobweb of tubes. My son saw him and then went to the waiting room and watched cartoons on telly with his friend.

My three days with Roderik felt like a life time. Which they were. Roderik’s life time.

On that last day, my daughter dressed him. Got him ready for the evening. My two children said their final goodbye to him and their granny took them home - truly that was the hardest part of all.

At 8 pm on the 11th March, Roderik’s life support was withdrawn.

I stayed in the hospital another 24 hours.

The world continued to seem totally different and, in a way, it still does.

For some time afterwards, I just wanted to talk about Roderik.

I had gone through nine months of pregnancy and I had given birth. But people couldn’t see my baby. I was psychologically geared up to be in a baby’s world again. And physically too. I was leaking milk. I was worn out physically. My body needed to recover. But no-one knew I had just given birth unless I told them. And then they didn't know what to say, of course. So after a while I stopped telling them.

I was suddenly the mother of two fast-growing school-age children and I had time to think – time I hadn’t had for years!

Not heaps of time. I was a working mother. But - compared with when the children were younger and pre-school - I had a bit of time.

I’ve always believed things happen for a reason - everything is part of a bigger picture.

I couldn’t imagine that this beautiful being - Roderik - had come along to do anything but good.

So the question ‘Why?’ kept coming to me.

My overwhelming feeling was that the important issues are taboo. And that, to women, these issues are more immediate, more directly relevant.

Sex, death and love. Subjects we either avoid or joke about.

I felt that, in a way, life would seem lighter if only we stop avoiding the issues that matter. If only we could talk about them.

For women who don't have access to contraception, don't have any 'rights', can't afford any choices, then the issues of sex, death and love are more obviously interrelated and immediate.

For many women, sex is not a laughing matter. Each time, it could lead to the creation of a new life. Or it could mean death.

If the father doesn't love you, doesn't care about you, if you have no land rights, no income - then sex is a serious matter for the mother. And often just a passing moment of 'pleasure' for the father.

Sex can be a death sentence

Where HIV is prevalent, sex can certainly mean a death sentence - for both mother and baby. Women are more likely to contract HIV from a man than vice versa (and this also applies to other sexually transmitted diseases).

Following Roderik's death, I lost my home and my relationship. For me, in many ways, that was a positive aspect. It represented a new start. I was lucky.

In the same situation, in another part of the world, I might have lost my life. At best, life would have been a constant struggle from then on.

I think that whatever rights we have, however many choices we can afford, we - as women - tend to feel an inherent sense of responsibilty - of connectedness with others and with our surroundings. Dare I say it, more so than men (as a generalisation).

This is born out by research and statistics.

We women tend to be more aware of our dependence on each other and on the planet, more drawn to cooperation, more likely to spend our income on family rather than frivolities, less easily corrupted and less prone to unnecessary risk-taking.

There are always exceptions of course - and the more we have the 'luxury' of detatching ourselves from our inherent nature, the more we are able to live like men, the less this might apply. And many men of course have very strong 'feminine' traits - but, sadly for everyone, society tends to discourage men from emphasising their caring, nurturing, loving side.

However, it is obvious that - as the 'mothers of the world' - our input is equally important and we need to be equally involved in caring for the world!

Life and Death in the Developing World

Five years after Roderik's birth, I set up our women's rights organisation to help give women a voice.

I travelled to Uganda and the Middle East - visiting women's groups.

The common factor, everywhere I went and every group I visited (often out in the bush where no westener - white woman - had been, where people didn't know the local town), was that there were women who wanted to connect with each other, to understand each other, to exchange ideas and to move forwards. They each had very valuable words to say, which need to be heard. Like millions of other women throughout the world.

In 2010, I attended my first International Women's Day event. I stayed with my friend and colleague, Fiona Gaffa. On her bathroom wall, she had a poster displaying the 'Declaration of Human Rights'.

It really sank in, then and there, that the Declaration of Human Rights had been around for well over half a century, and that International Women's Day had been around for nearly a hundred years. And yet both milestones seemed to have made little or no impact in many parts of the world. And many women still don't know their rights. Yes women in many parts of the world now have a vote. And we are supposed to be grateful. But mostly we need to choose from male canditates!

In Uganda, there was no escaping the issue of death. So many young widows. So many orphans. In a way, life felt more real.

In the 'developed world', we are inclined to live in our cocoons, in our safety zones. As if we will never die. As if nothing ever changes.

Although of course stillbirth does happens here too. Babies die here, children die here - much more commonly than we realise.

And in fact of course we all die. But we seem to avoid the subject.

And this can lead us to getting our values all muddled up.
Here in the UK, we are very 'precious'. We like 'things'. We like to preserve 'things'. We like to accumulate new things.
This is a gross generalisation I know.
But somehow I think often we have lost site of what really matters, to the extent that we are able to put 'things' even before human rights.
Have we lost sight of the fact that life itself is the most valuable thing?

Every day, throughout the world, mothers die in childbirth.

Every day, throughout the world, babies are stillborn.And very many infant and maternal deaths are unavoidable.

Roderik was one of 3.2 million babies born each year who do not survive.

Too often, this is due to denial of basic human rights.

They are all our children.