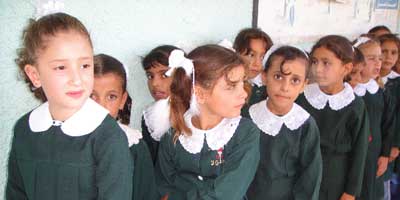 After recently returning from reporting on the situation in Gaza, Channel 4 news reporter, Jon Snow has made an impassioned video calling for us to act to end the violence. In fact, he uttered the most powerful words I have ever heard him say, which were simply: ‘This is something that every one of us has to confront. We have to know that in some way we actually share some responsibility for those deaths. Because for us it is no priority whatever to stop it. Our United Nations, our government, our world, is not that interested. The fact that you’re watching this, that you’ve chosen to watch it means that you’re actually motivated to do something, and that in the end is the greatest hope that the people in Gaza have.’

I’d have thought that the likes of Jon Snow, who must have seen countless atrocities in his time working as a journalist, would have become hardened to such sights – yet something about Gaza has moved him. Now, I am by no means Jon Snow, but again I thought a year of studying ethnic conflict and years of human rights campaigning had hardened me enough to take these images – and in some ways that is true. I can rationally understand how two different groups in society can get to the point in which they feel no remorse in doing some of the most inhumane and evil acts on one another, I can read the most detailed accounts of the most horrific atrocities that took place during the Rwandan and Bosnian genocide, I’ve researched and written papers on the realities of child soldiers and child pirates, and I can watch countless documentaries on similar issues without having to turn away or breaking down in tears. In fact reading and seeing such things only drives me forward, and in some ways I think forces me to be a better person, as it is a constant reminder of what can happen when humans stop being nice to one another. Similarly, I expect for Jon Snow, part of the reason why he has become the respected reporter he is is down to a similar drive. The kind that when you are confronted with such horrific things, rather than letting it cripple you emotionally, you do whatever you can to make some amount of difference.

What does still always surprise me though is the fact that there are thousands of people in the world who can see such inhuman things happening and yet merely turn a blind eye to them – essentially letting it happen without trying to do anything to stop it. I’m not sure why this surprises me, after all many people who are alive today would have to be counted as the generation who stood by and did nothing to stop genocide from happening in either Rwanda or Bosnia, so it should hardly seem surprising that something similar is happening in Gaza today. As Joaquin Phoenix puts it in ‘Hotel Rwanda’: ‘They’ll see this footage, they’ll say “Oh my god, that’s horrible,” and go on eating their dinners.’ Logically I know this is what people will do, but yet I still cannot fully comprehend it. Judging by Jon Snow’s video this is also something he struggles with.

I can understand if people do nothing because they feel powerless to do anything, but in the age of the internet there is always something you can do. There are a number of e-petitions calling on a whole number of people to help stop the bloodshed and killing of children; all we have to do is add our name. Then of course there is always the possibility of writing to the government, or the UN, asking them to do more. Or just simply sharing Jon Snow’s video, so more people understand that what is happening in Gaza right now is not acceptable.

Overall, I wanted to share this video for two reasons. The first is out of respect for Jon Snow, and all other journalists, who have put both their lives and mental well-being on the line by going into Gaza to show us the reality of what is happening there. The second is because no matter how hard it might be to see some of the images that are coming out of Gaza it does not mean that we should turn away from it. If it is hard to watch from here in the luxury of our own homes then imagine those images being your everyday life, because for the ordinary people of Gaza that is their daily reality.

So please do watch Jon Snow: The Children of Gaza and see how what he has witnessed in Gaza has moved him in a way I have never seen before, and add your name to any of the petitions listed below. Don’t let us be the generation that sits by and watches as children and whole families are killed in such brutal ways.