They are not ‘Wives of Jihadists’ they are child soldiers 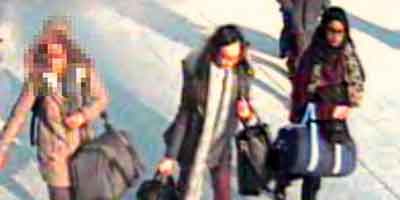 Over the last week I’ve heard and read a lot of different descriptions and opinions in the debate surrounding the three British school girls who have gone to join Isis in Syria. Some argue that these girls are ‘she devils’ who are intelligent enough to understand the consequences of their actions. Others believe they have fallen victim to an organisation that systematically grooms impressionable teenagers and being an A*student does not mean you are immune to such manipulation. While I whole heartedly agree with the latter I actually think those advocating it are missing the most vital point, which is we need to stop referring to these girls as ‘Wives of Jihadists’ and instead start using the term child soldiers.

I imagine for many people this term might seem completely inappropriate. After all these girls are not like the children kidnapped and forced to fight as part of the Lord’s Resistance Army in Uganda, they are well educated girls from London who chose to go and join the fighting. How could they possibly be child soldiers?

The simple answer is because under the internationally agreed definition of a child soldier and international law they are. The Paris Principles and Guidelines on Children Associated with Armed Forces or Armed Groups clearly states that a child soldier is ‘any person below 18 years of age who is, or who has been, recruited or used by an armed force or armed group in any capacity, including but not limited to children, boys and girls, used as fighters, cooks, porters, messengers, spies or for sexual purposes.’ Based on this description these girls became child soldiers the second they joined Isis and should be referred to as such.

Calling them child soldiers may also help to make it clear to others, who are vulnerable to similar manipulation, what exactly it is they would be walking into if they followed in the footsteps of these three girls. Joining Isis in Syria is not going to be a wonderful adventure; it is going to be a traumatic and horrific experience. No amount of good education and upbringing can help you to imagine at the age of 15 or 16, when you’ve only ever lived in safety and security, what it is really like to be involved with an armed group like Isis. These girls could not have completely understood what they were getting themselves into because they have never experienced that kind of brutality before, and I doubt they’ve had cause to read about the realities of what it means to be a young female combatant. On this basis these girl were probably more vulnerable to the manipulation of Isis than those within the countries in which they operates. At least if you have grown up with conflict and terrorism being part of your daily life you have some understanding of what it means to actively become a part of that.

It is also important that people realise that joining Isis without force does not mean these girls forfeit the right to be treated with the same consideration as other child soldiers. Thousands of children involved with armed groups join up voluntarily, many as a result of careful grooming and clever manipulation similar to the kind these girls most likely experienced, the only difference is this time it is happening to young people right here in the UK.  No doubt there will be those that will question how much these girls have really been groomed and manipulated. To those people I would ask you to remember that the recruitment and use of child soldiers is part of Isis’ overall strategy and sadly they are very good at it, with these girls being just three among many recent recruits under the age of 18.

I am not saying that these girls are completely blameless for the actions they have taken. Yes they made a decision, yes they chose to get on flight and join Isis, and that should not be forgotten if they are ever to return to the UK. However, we need to recognise that young people can be groomed and manipulated into an armed group in the same way that they can into sex or drugs. This is exactly why international law classifies any person under the age of 18 involved in armed conflict as a child soldier and why we need to be referring to these girls as such. It is also why we need to be asking how our society could have failed them so badly and what we can do to protect more impressionable young people from falling victim in the same way.