Sex Tourism and Children - the death of our girls 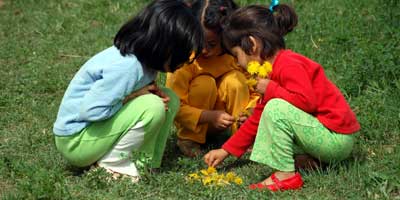 The Death of Our Girls

Fernanda is a Brazilian Gender researcher with a master's degree in Sociology.
She is currently studying Gender, Identity and Citizenship in UCA-Cadiz, Spain.

During my work, I read about many cases of human trafficking each week.

I think of the little girls I know in my own life, playing with dolls

These cases often contain heartbreaking stories of children as young as eight or nine working or being enslaved in forced prostitution.

I think of the little girls I know in my own life, playing with dolls and dressing up.

Since researching this topic, I cannot get away from the image that these children become props for men who mask themselves as tourists when they are actually abusers.

These girls become the dolls for perverted adults, and this image haunts me.

This IS sexual slavery and these young girls are bodies who are sold for sex.

In South East Asia, Thailand, Cambodia, and India have become favored destinations for pedophiles and abusers. These men trade bodies. The bodies of girls.

Everything is driven by money and demand.

According to reports from UNICEF and other NGO's, the sexual tourism industry exploits two million children in the world.

Pedophilia is primarily defined as a psychiatric disorder characterized by having a sexual interest in pre-pubescent children.

“The main engine of child prostitution in many areas is sexual tourism. Its practitioners are the largest consumers of child pornography"

When a pedophile seeks to have sex with children but understands the criminal implications, he seeks out child prostitutes.

Child prostitution is hidden to a greater degree than adult prostitution, but with enough money, it can easily be found. Our imagination cannot envisage the life these children are subjected to.

Constant fear, hunger, and drugs make mere existence a living hell. These children become slaves who are forced to become disposable objects for sexual use.

The figures are always cold and impersonal, but to get an idea of the scale of the matters. consider these statistics:

The problem is not limited to developing countries.

Child prostitution in the United States and Canada is believed to have reached 100,000 children.

At least another 100,000 are exploited in the "industry" of child pornography.

The reality is that the majority of exploited children will die of AIDS, tuberculosis or other diseases as a result of their prostitution.

It is estimated that in the year 2000, more than 50,000 children contracted AIDS through prostitution.

The Dark Side of Beautiful Tourist Spots

My recent work and studies have led me to a temporary residence in Spain.

Not to research this sordid subject at a grass roots level would be a mistake, so my most recent research has been to explore the areas surrounding Madrid, Barcelona and Bilbao.

Popular tourist destinations for those seeking culture and beauty.

In areas surrounding cities, pimps target children who are homeless or have run away from home

Not a country we may stereotypically think of as a target for sexual tourism.

The results of this research confimed to me that abuse is prolific and widespread in most areas of the globe.

In both Spain’s industrial belts and areas surrounding cities, pimps target children who are homeless or have escaped from their homes in search of a better life.

Pimps are often prostitutes themselves, or former prostitutes who are likely to be heroin-dependent. They take advantage of economic deprivation and offer the children a job or financial assistance. This job usually involves working in a bar, a show or a dance group.

Once the trust of the child is gained, the horror begins

The child is often seduced by a “disco pimp” who offers to take the child home or away from the bar but leads them directly to a pimp.

Pimps also use smaller children, “spunkies”, to capture others and lead them directly to the pimp.

The smaller child is usually doing this under threat of death or violation.

Then begins the torture.

The girls are locked up, beaten, and raped by their pimps for several days.

Once their virginity is lost they are then ready to receive their first customer.

Other children are sent straight to customers who want a virgin child to rape.

The children are beaten and threatened constantly to ensure their silence. They are always watched and not permitted to go outside. Cocaine and heroin are used to increase the child’s performance and to ensure dependency on the pimp.

My findings have lead me to fear what is and will take place in my home country. Brazil is where I was born and where I call home.

When I talk to my friends and collegues across the globe, Brazil continues to conjure an image of carnival, scenery, beauty and vibrance.

In 2014 the World Cup will come to Brazil bringing tourists with a passion for sport, boosting the economy and allowing people to discover the beauty of my country and the warmth of its people.

While the football fans talk tactics on the plane, they may well be sitting alongside a tourist with a different agenda.

The 2014 World Cup will also bring sexual tourists to Brazil.

Of the thirteen Brazilian cities that will host the World Cup, each ranks high in the number of allegations of child sexual abuse reported annually.

Débora Cohim is the General Coordinator of Project Viver, a service linked to the Ministry of Public Security, which has been created to help people in situations of sexual violence.

Débora states that, “Sexual tourism is produced by the image that people have of Brazil as a country of freedoms...

“The main engine of child prostitution in many areas is sexual tourism. Its practitioners are the largest consumers of child pornography, and stem mainly from the United States, Germany, UK, Australia and Japan.“

According to the World Tourism Organisation, each year more than 600 million international tourist trips are taken. 20% of travelers surveyed said they seek sex during their holiday. 3% confessed to having pedophile tendencies. This is more than 3 million people.

And what of those who do not confess? How many of them are out there?

'Rewarded' by a consumerist society

“Children and adults of all social classes are the main victims of sexual abuse in Brazil, but the greatest number of, and the most vulnerable of victims, are poor children,” says Debora.

"Sometimes these children accept the situation as a matter of survival, in exchange for food and money for their parents. In other cases, they are driven by the increasingly strong consumerist society. They are offered brand-name clothes, expensive shoes, and consumer electronics in exchange for their services."

The lack of criminal investigation into these situations, and the ever present poverty that leads such women and children to this horrific life, are the main reasons this practice continues.