Empowering the Grassroots - 'My work is in my blood cells' 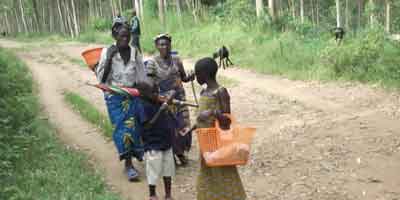 Empowering the Grassroots - My work is in my blood cells

“Everyone has inside of him [her] a piece of good news. The good news is that you don't know how great you can be! How much you can love! What you can accomplish! And what your potential is!”

What connection is there between a concentration camp memorial site and a museum of science and technology?

On the first thought, one might think one not much at all; one represents terror and certain death rooted in ignorance and hatred, and the other,  rooted in hope and progress – though one might argue that science and technology has indeed been used to harm others.

To my mind, the link between the two is people. 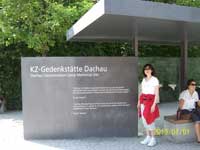 Jennifer Timmons visiting Dachau Concentration CampI recently had the opportunity to visit the Dachau Concentration Camp Memorial Site and the Deutches Museum, both in southern Germany, on two consecutive days. The contrast between the two was stark, as was my response to them: one of wondering how people could be driven to commit such unspeakable horrors upon others, and on the following day, of being in absolute awe in viewing “masterpieces of science and technology”.

The emotions that welled up inside me at those two very disparate places were not unlike the ones I often experience when I edit news from our grassroots organizations whom we refer to as Field Partners horror at girls being married off before they even reach their teenage years, women being used as weapons of war and repeatedly raped and then rejected by their communities, shock at a murder of a woman human rights worker because of her work...and months later, a bomb at her organization's office, floods or famine affecting countless villagers – wiping out their livelihoods, with some dying from starvation – and unscrupulous individuals who dare to exploit those more vulnerable, especially women and children.

Why, I ask myself?

How can others even think to exploit and destroy people's lives? It is easy for me to ask and wonder because I am thousands of miles away from points of conflict and extreme misery –  where hope is fleeting or does not exist.

And yet I am in continual awe of our Field Partners, who work tirelessly to improve the lives of members of their communities, particularly women and children, whose lives have been devastated by war, poverty, violence at home and in their communities, sexual abuse, denial of rights to access education, work opportunities, property ownership, or the right to simply be treated like a human being – should they happen to have a disability, be afflicted with HIV or AIDS, or even just being an older person with less mobility.

These Safe World Field Partners, scattered throughout Africa and Asia, do much to encourage and train others in sustainable skills such as agriculture, animal husbandry, sewing, and crafts, to name a few.

They provide hope for families by providing education and support through their team of volunteers, including education in rights, respecting others, and not discriminating on the basis of gender, age, or disabilities.

School Awareness Day with SURCOD - Safe World Field Partner in MalawiWhen I saw fascinating, hands-on displays of technology for the benefit of visitors to learn –  such as microscopes to study the texture of different fibers, a computer game to learn something about the sun and stars, or watching a glassblower create a beautiful piece of art, I could not help but think of our Field Partners who strive to help poor and orphaned children get an education, I thought, shouldn't every child have an opportunity to learn...to wonder about how things work?

Instead of being married off to someone they likely barely know – much less love, denied an education, and working mindlessly for the rest of their lives?

Shouldn't they have an opportunity to explore?

To build on the discoveries of those scientists who came before them, to further improve and raise the standard of living for their communities?

In a grand museum of so many technologies and with limited time, I could not see everything, so I chose what most appealed to me personally, which was astronomy, glassblowing, paper, bookmaking, textiles, radio, and musical instruments.

It was fascinating to learn about the processes of creating different products, seeing how machinery and technology advanced over the centuries, and the discoveries made! Art, science, music...all a part of human creativity and progress!

Towards a Brighter Future

As Field Partners Manager & Editor, I am nearly daily reminded of the shortcomings of society everywhere, but particularly from the communities from which our Field Partners operate.

When I edit others' news...sometimes the news is so shocking that I must step away from the computer to try to digest the magnitude of what I am reading, such as girls being forced out of school to be married off too young to a (often much older) man, for reasons of poverty, most likely.

Forbidden to empower themselves.

My work is in my blood cells; how could I not think of these countless girls I have never met, when I see and learn about the wonderful works of science and technology?

They have been denied this opportunity.

To grow and contribute toward a brighter future for themselves, their families, their communities.

Our Field Partners often operate in dire and dangerous conditions due to war, natural disasters, poverty, or cultural and political restraints. They also work on lean budgets and the goodwill of many volunteers who wish to improve the lives of less fortunate members of society. 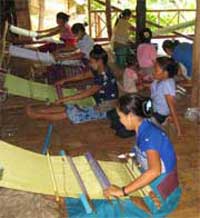 WEAVE Women - Safe World Field Partner on the Thai-Burma border.They are not visible to the public like huge, well-financed international organizations.

One point is clear among our Field Partners: they are in solidarity when it comes to helping their communities in the best way they are able – in empowering the most vulnerable – women, children, and the elderly, in particular.

And they know their own needs best, and understand the value and necessity of educating and training their communities, so everyone can benefit.

Doesn't it stand to reason that if everyone – especially children, receives at least a basic education, that an entire community can benefit?

I'm no expert on education or economics, and I've only seen a microcosm of what humanity can do to progress for everyone's benefit, but I cannot for the life of me understand why those in positions of authority would deny others basic human rights and needs.

Who wouldn't want everyone to have a chance in life?

To see children happy and learn and wonder?

To educate others to stop disrespecting people on the basis of ignorance of gender, disability, beliefs, nationality, or age?

The people who ended up in the Dachau Concentration Camp had their fate sealed by those who disagreed with them, loathed them, tortured them, killed them. Their dreams died with them in a place synonymous with terror, brutality, and bloodthirstiness.

They had no chance to survive.

It is a horrific chapter of our human history...something in the dustbin of the not-too-distant past that many would rather not think about.

But so many people are still suffering today in many ways, even without a madman hell-bent on conquering the world.

I am grateful that I had the opportunity to walk grounds of the notorious first concentration camp established during the Nazi regime as it helped me to reflect on history and the horrific impact that violent emotions rooted in ignorance has on others, when carried out.

And I'm also grateful I got to see marvels of human ingenuity – of science, technology, art, and music – to see and learn about so many things and think about what human beings have and can accomplish!

In two days –  the somber experience of seeing where prisoners stayed, learning how they were treated, and then the next day, standing in awe before marvels of human invention – those opportunities convinced me to always have hope.

Hope for a better world, and to keep working hard on behalf of our Field Partners, as they continue to bring hope to the women and children they tirelessly help.

So more people can begin to dream and work toward a brighter future. Erase discrimination.

And make more music. Create art. And improve technology in all aspects of daily life, for their own empowerment and for the benefit of everyone around them.

Wouldn't that be an awesome wonder?

Appeals from the Grassroots