In Praise of Outspoken Women 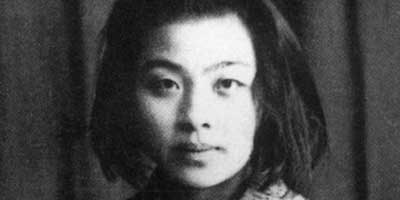 I have a penchant toward women in history whose work I admire and respect, so I can emulate them in some small way.

I imagine (yes, I do!) myself rising up and being a radical rabble rouser against social injustices like anarchist Emma Goldman! I see myself building up intellectual fortitude and curiosity about the world like feminist Simone de Beauvoir! I am determined to become more courageous and not worry about what society thinks about my convictions like author Ding Ling!

They may be long gone from this world, but I continue to study their words, and their activism inspires and strongly influences me when I write, reminding me to remain resolute in my convictions - particularly with regard to valuing and treating women with the respect they deserve as fellow human beings, as they did.

These are the women whose traits touch something within me – traits I want to cultivate within myself to become uninhibited, fearless, curious, in whatever I think/say/do/write.

You may ask: Why?

Does a girl, a woman, have to wait til she reaches mid-life (or older, if at all) to become more confident of herself so that she doesn't have to constantly worry about kowtowing to society's expectations (family, friends, community)? Or put more bluntly: be worried about saving face?

I don't think being confident means disrespecting those around you; isn't it possible for any girl to express her thoughts without fear of being reprimanded and punished?

Isn't it possible for any woman to confidently express her thoughts without being instantly judged and called a bitch? That she's somehow less a woman – less a human being for voicing her thoughts? Or, not a nice person? Is it possible for others to view her as a confident woman who knows what she wants and who won't put up with any nonsense?

And whose face are we really talking about?

Her face? The family's face? The community's face?

Granted, there is some value in not embarrassing your loved ones and friends – not to mention yourself, in what you say or write publicly! Perhaps that lends a kind of social order and shows a measure of mutual respect.

I'm talking off the top of my head here, and obviously am not an expert in what causes people to behave they way they do, but it has bothered me for a long time that when I observe girls and women express their opinions confidently and assertively, there is inevitably some level of discomfort displayed from those who might disagree more with how she said something than what she said:

(big sigh of resignation and shaking of the head!)

“She so bossy [for someone so young]!”

“Where did she get that strong will from?!”

I have heard these kinds of comments repeatedly over the years, in whispers and in loud disapproval, and in private and in public, from relatives and friends, classmates in school and complete strangers on the street, and in many forms of media.

And I have shared the same sentiments in my mind, I'm sorry to say. I have also spewed them out in frustration at perceived (or real) meanness from other girls and women. I would like to eradicate all that negative social conditioning against the female half of humanity in my head, out of every fiber of my being, and in the world.

I wish this for all the girls and women of the world, now and in the future: to be free of societal constraints of how one is supposed to be.

You are supposed to be YOU!

Which requires a great deal of courage when faced by opposition, scorn, or perhaps worst of all, apathy.

Must we endure another millennium for girls and women to be respected, valued, and trusted as fully functioning, thinking, human beings?

Wouldn't it be cool to have future generations look back through the annals of history and scratch and shake their heads that so many girls and women around the globe were still treated as second-class citizens (and worse) in the 21st century?

Trafficking? Denial of agency over one's own body? Discriminatory laws against women inheriting land? Discrimination against widows? Lack of access to basic health care? Being questioned about the veracity of your rape allegation or sexual harassment (particularly by a person in a position of power or a star athlete)? Child marriage? Female genital mutilation (FGM)? Honor killings (even in the West)? Acid burnings?

These aren't issues exclusive to some other century in the dim, distant past...They are societal ills causing needless suffering of countless women and girls worldwide TODAY!

I say it's way past due for the girls and women of the world to throw off their proverbial shackles! Yes, I know that sounds dreamy and is impractical for the millions who remain constrained by severe cultural and traditional expectations and who sadly face a harsh life, especially without any access to education...

but those of us (me!) who are incensed to the marrow of our bones by these injustices must relentlessly advocate (and agitate!) for girls and women everywhere, so that every girl and woman is free to reach her fullest potential.

And just maybe, one day, this planet will be teeming with confident girls and women because societal expectations about them will have been shattered as they deserve to be; all the ugly things I mentioned above will become intolerable, and those who dare to inflict violence will not escape with impunity.

A worthy goal, don't you think?

For myself, I will keep, Ding Ling’s, Emma’s, and Simone's words close to my heart and in my mind as time marches on, and endeavor to keep their spirit of activism in my own work – uninhibited, fearless, and curious!

WFAC (Women for a Change) Cameroon – Discrimination Against Widows