Volunteering to Change the World 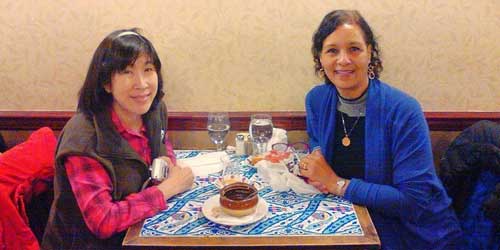 Wouldn't be so easy and wonderful for every new encounter with someone you'd never met before to flow without a bump or awkward moment?

I had that incredible luck recently when I met Sayydah Garrett, co-founder and president of Pastoralist Child Foundation (PCF) on a chilly afternoon in New York City. PCF is a Safe World for Women Field Partner that operates in Kenya and works tirelessly to raise awareness about and end female genital mutilation (FGM) as well as child marriage.

The first meeting with one of our grassroots partners

This was the very first time I had ever met a Field Partner in the nearly six years I have worked with Safe World for Women!

To say I was a bit nervous and also was highly anticipating our meeting is an understatement; it felt to me like the stars in the sky were raining down on me as a reward for working toward women's and girls' empowerment – I was actually going to meet a woman who is on the ground working to change the course of the lives of countless girls for the better!

I blog about women like Sayydah and edit her work as well as the work of those women and men who work relentlessly toward gender equality and social justice, so to have an opportunity to meet IN PERSON without having to cross an ocean and another continent was really nothing short of miraculous to my mind!

A "WOW" event, in capital letters!

This was light years beyond another day I remember several years ago, when a particular Hollywood celebrity briefly walked by me. Suddenly a mass of paparazzi appeared out of nowhere, together with a crowd of screaming prepubescent girls, overcome with excitement, crowding you out as if to suck up some special power from that celebrity's presence.

Do you think I screamed with happiness at meeting Sayydah for the first time, excited as I was at our opportunity to meet?

No, I'm not a screamer (unless there's a wicked big, thick, leggy, hairy, or jumpy spider nearby), though inwardly I felt like doing a happy dance right then and there. I really did not know what to expect from our first introduction, though we did have the benefit of corresponding for over a year and just did talk on the phone a couple days beforehand.

I was running some minutes late, having gotten disoriented in the Yankee Stadium train station to find the right platform to catch my train, and then having to walk several blocks to Aba Istanbul restaurant on West 57th Street in New York City.

As soon as I walked in, I saw Sayydah waving and smiling...This first encounter was more like a meeting of kindred spirits, like old friends catching up – only, we'd never met before!

Warmth radiated from Sayydah, her presence, even though she said she was cold; it was indeed chilly outside. Hugs were in order! We had initially planned to walk around the city after lunch, first Times Square, and then after news of the tragic Paris terrorist attacks and threats from ISIS, we thought perhaps Central Park would be an ideal place to stroll around if Mother Nature were cooperating.

But, too chilly for both of us to go outdoors!

So, before, during, and after a delicious lunch, multiple cups of equally delightful Turkish tea (which brought back memories for me, having been in Turkey twice) and light, tummy-friendly desserts of almond pudding for Sayydah and rice pudding for me, we chatted for several hours about anything and everything: our work and our respective organizations' field partnership with one another, our families and personal backgrounds, and even discussing a rare medical ailment that her husband and I both have!

Truly, meeting with Sayydah reminded me that there are so many people who share similar values and goals, and who do incredible work on the ground, the likes of which I may never see up close and 'live'. But editing her updates and reading about her organization's work makes me feel connected to her and her work – how PCF helps empower the girls of Samburu County with information to think for themselves and protect themselves to stay healthy.

In the warmth of a Turkish restaurant sheltered from the cold air outside, I sat with a determined and impassioned woman, an inspiring leader! I couldn't have asked for a more awesome first meeting with an FP. I felt blessed by her presence.

It really was magical to be together with her there, and to connect so easily!

I'm just lucky that she's in the US most of the time and that we intend to meet up in the future, when the opportunity arises!