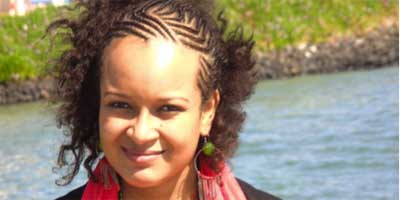 I've written before about the esteem I have for female activists in Sudan; the conditions and pressure they work under are truly horrific. They operate in a total police state. The laws in their country are a corrupted version of Shar'ia law, designed to exert social control and keep women hidden at home. They can be picked up at any time by security agents who may torture and rape them with impunity.

It's no small decision to continue with your activism under such conditions. I spoke to two young Sudanese women who have been involved in human rights activism to find out what drives them and how their difficult work has impacted their lives.

"I was born in the heart of Khartoum and raised in Abu Dhabi, where I attended high school.

Upon graduating, I decided to attend university in Sudan and explore the cultures, customs and traditions of my country. Visiting every summer was not enough for me; I wanted to learn everything there is to know about Sudan. I did my undergraduate studies in Biomedical Engineering at a university in Khartoum.

I love my family more than anything in this world. My friends come second. I enjoy reading, sometimes more than I do writing.

My biggest fear is to die without having accomplished much in life. I love to travel the world and try different things, eat different food. I am both claustrophobic and achluophobic."

"Originally I’m Nubian, but I  was raised in Khartoum, Medani, Sinnar and visited most of the cities and villages from Khartoum to Damazin, Gedarif & Kassala. I used to be a pharmacist before deciding to dedicate my time and efforts to defending human rights.

I'm not a loud person, I hate noise. I like walking, dancing, listening to music, reading books, playing with my nieces and nephews. I love fashion- dresses, shoes and make-up, although I hate putting on make-up every day. I love my boyfriend."

What led you to become politically aware?

"When I first moved to Sudan in 2003 I began educating myself about the political situation in my country. I've always had a passion for writing and in 2006 I started a blog. There was no Twitter or Facebook at the time, and I used my blog to voice my opinions on all matters pertaining to Sudan. It was and still is my outlet."

"In the 1990s, my brothers went to Jihad against the Christian Southerners. As I grew up, I knew that wasn't right. Innocent people were killed in those wars. Soldiers fought battles for no reason and still our lives are affected by lying politicians. When I was in my first year of college, protests against the genocide in Darfur were happening in major cities around the world while in Khartoum, only the Darfur Student Association were campaigning against it. I felt like something needed to be done in this country, which despite suffering Africa's longest running civil war, has no real anti-war campaign."

Maha, you're a biomedical engineer but also a blogger and freelance writer; Was it always your intention to write or did it come about due to circumstance?

"I remember owning a journal ever since I was a little kid. I still have some of them; I sometimes go back and read them just to have a little laugh. There were times when losing my walkman was the biggest problem in my life. When I discovered blogging it was my chance  to take my writing to the next level. I blogged anonymously and was grateful for the feedback I received. After I graduated from university and earned my engineering degree, I took up a job in my field but never stopped blogging. My best friend, journalist Reem Shawkat, encouraged me to become a freelance writer. I did; and I owe it all to her."

Yosra, when did you start blogging? Why?

"I started blogging in August 2011, soon after my boy friend get back from Egypt. He told me about the success stories of Egyptian bloggers and how they influenced change in their country. He showed me a book about the use of blogs and social media. I had a lot of thoughts I wished to share with others and opinions I need to discuss especially I don't belong to any political party and I don’t have any place that my voice would be heard by others who had similar thoughts."

What is daily life for a woman in Khartoum like?

"Hard & unexpected for most women. You can be caught, humiliated and harassed without knowing exactly what kinds of charges you are facing. You have to follow certain dress codes and control your movements “even for work and study” in order not to be arrested or take the risk of challenging the regime. Tea ladies, street vendors and activist women are taking this risk on a daily basis."

Tell us about Sudan Revolts, from your perspective.

"The protests, triggered by the government's crippling austerity measures, were sparked by strong Sudanese women - namely the female students and dorm residents of the University of Khartoum. The bravery of Sudanese women is marked all over our history; they were at the forefront of the 1964 and 1985 revolution and have played a big role in shaping the political landscape of the country. However, austerity was not the one and only reason for the protests; but decades of injustice, war and corruption were the main driving force behind Sudan Revolts."

"It was an inspiring experience that indicated this regime will not last long. Sudan revolts didn't succeed in changing NCP regime but it proved that the change is coming. It was an outbreak of spontaneous protests which came from the people and showed us, “the activists”, what needs to be done/ organised to have a more powerful and successful wave of Sudan Revolts 2."

What was the personal impact of Sudan Revolts for you?

"I have learned, lost and gained a lot. My life was turned around. My eyes opened to a lot of things I was blind to in the near past. Most notably I have transformed into a new person. This experience has matured me to a great extent."

"Motivating in terms of mobilising the efforts against NCP; heartbreaking for the Nyala victims and sad because of the pressure when a lot of friends were detained while I’m moving freely and helpless."

Is there a credible political opposition in Sudan, if Bashir were to be removed from power?

"Current opposition may step up and claim power, yes. But very few of them have shown any significant support of the protests. When Bashir is removed from power, our only hope is the youth. Youth movements must transform into credible parties. The people trust them more than they do existing oppositions."

What next for you and for Sudan?

"I'll continue what I'm doing until I decide to have children; I'll step away for a while to raise them. For Sudan, getting rid of NCP and the parasitic, sectarian political parties. We need to build a new Sudanese state, after changing the NCP regime, or we will repeat the same mistakes of the 1964 and 1985 revolutions."

To learn more about women human rights defenders in Sudan or to support their work, check out SIHA Network.