'We Are Sick and Tired!' 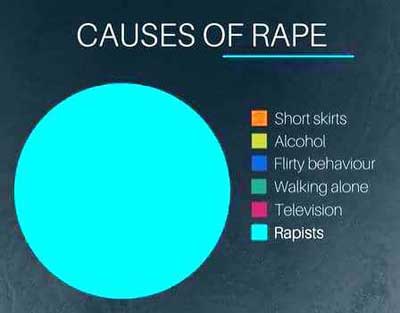 The claim goes like this: women trigger the act of rape. This claim is part of a larger discourse motivated by misogyny, the fear of women and the intention to dominate them through fear, but the fact is that the act of rape is never consensual, and there are no exceptions to this.

There are those who would deny it, those who believe that a woman and her body are fundamentally guilty. She’s the embodiment of guilt and the responsibility lies with her to make sure that she doesn’t arouse men.

But don’t men have some reason, wit and will? Poor fragile men, so easily aroused that they have no choice but to rape a woman when they glimpse her in a low-cut dress! To lose control at the sight of a low-cut dress is proof of his sexual pathology, not of her guilt. It is the man who is perverted.

Rape is committed by perverts. They rape women, children, the handicapped...they can only assert their manhood through the bodies of those who are weaker, who cannot object. They hate women, they’re scared of women. The act of sex can only make them feel like a man when it’s performed without consent. They’re such cowards, so desperate...

For these men, rape is akin to the ownership of a property and a woman is a property, a child is a property. Invariably, these men refuse to understand that rape is an act contrary to the will of the woman.

Those who are raped have consented, or they deserved it, or...

these ‘ors’ are multiplied:

or used by ruthless lawyers

or endorsed by judges,

These ‘ors’ serve only to cultivate

the violence and cruelty of men

What will it take for the truth to be heard? Maybe, when women, young and old, don’t give up on shouting out loud, when law-makers, lawyers and judges open their ears and begin to understand, maybe, just maybe, things will start to change.

This body is my body! No-one, not my mother or father, my husband or the judges, the psychiatrists or those who spout religion, has the right to claim my body.