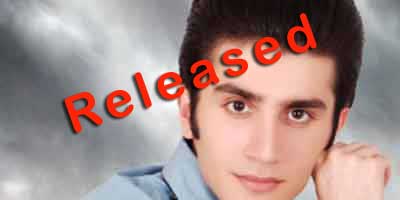 Navid Mohebbi, the youngest blogger ever imprisoned, was released by Iran on Christmas Day, 2010

According to the Iranian Human Rights group RAHANA, the 18-year-old amateur blogger and women's rights advocate was released from Sari prison on Christmas Day.

The release, first announced on local radio and picked up by the Human Rights Activists News Agency over the weekend, came after Navid was sentenced to three years of suspended imprisonment in a closed door court session in which he did not have access to his lawyer, likely a face-saving tactic by Iranian authorities.

While governments and mainstream media have paid little attention to Navid's case, Iran has been under heavy pressure from domestic opposition leaders and international human and women's rights activists to release him.

A Safe World for Women led efforts on Change.org to pressure senior UN human rights officials to advocate for Navid's release. Over 600 Change.org members took action to demand UN help in getting Navid released, and we have covered Navid's case a number of times.

"It's wonderful to have some good news isn't it!" Christine Crowstaff, Founder of A Safe World for Women, told Change.org, "Our Iran correspondent sends you many thanks for all you have done for Navid! And so do we all!"

Change.org - The Campaign for Navid's release.