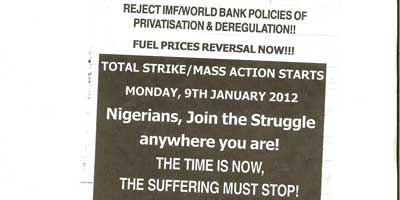 "The effects of subsidy removal on poor women and children cannot be over accentuated....

The ordinary Nigerian has lost trust in our leadership.""

As people Worldwide jubilate, celebrate and send love messages to their loved ones abroad and around on the 1st of January 2012, Nigerians woke up to the unexpected news of fuel subsidy removal.

Presently, the litre of petroleum that was sold before we slept on the Saturday, 21st of 2011 suddenly changed to 145 Naira.

The sudden change in the pump price of fuel has aroused many reactions from well meaning Nigerians and there have been several protests, rallies and few killings of civilians in Kwara State. One will think that with the recurrent killings, bombings, threat, civil war dished out on Nigerians by the dreaded Boko Harams in Northern Nigeria; that The President of Nigeria would read out the strategies for bringing about lasting peace and unity in Nigeria on the 1st of January, 2012. Unfortunately, our leadership is concerned with how the pockets of Nigerian leaders would be filled with the blood of the common masses, drained as oil.

The government of Nigeria gave two supposedly cogent reasons for removing fuel subsidy: to tackle the corruption of the importer and to utilize the funds for capital projects. Nigerians are used to rulers citing these reasons for all their misdemeanors.  Firstly, to tackle corruption, one must be honest, and be ready to answer questions such as how much do Nigerian political leaders receive annually? Why are the looters and corrupt importers not arrested? Does it mean that these organizations or individuals behind this corrupt practice cannot be brought to book? The populace accuse the President of Nigeria of being afraid of the cabal, who apparently sponsored his campaign and rigged elections for the ruling People’s Democratic Party? Why is it that less that a million percent of Nigerians who tagged themselves as the cabal and turn our president like a puppet are holding all of us to ransom?

The above stated reasons for subsidy removal may be genuine but the ordinary Nigerian has lost trust in our leadership.

We operate a government of promise and fail; lies and perpetual corruption has robbed Nigerians of any iota of trust in leaders. Trust cannot be forced, it can only be earned. A leader who has refused to come out openly with his take home pay, declaration of his assets and unnecessary expensive expenditures in the form of several aides, abandoned projects etc, can only earn people's disbelief.  It is so strange that in a country where more than 70 percent of the population lives on a meager less than 2 US dollars per day and the president budgeted a whooping sum of 1.5 Million Naira for his daily feeding.

The effects of subsidy removal on poor women and children cannot be over accentuated.

The removal of fuel subsidy affects every facet of Nigerians life. Immediately it was announced on January 1, many fuel stations in the Eastern and far North began to sell a liter for 250 Naira! The price of sachet water doubled likewise the prices of local food items in our local markets.  It is so unfortunate that what is paramount to the common Nigerian is being handled with lassie faire. The Minister of Finance Ngozi Okonjo Iweala was quoted in one of Nigerian National Newspaper today as saying that 72 percent of Nigerians trek, how come we are discussing subsidy removal? Ah, why will good Nigerians become robots for International Corporations?  The interest of our people should come first.

Our leaders have self interest and the interest of the masses is just considered as coincidental or tertiary. How long will this continue? How long will the leadership continue to make a lot of citizens irresponsible?

Therefore, in reaction to the President of Nigeria’s obstinate and heretic decision and not putting into consideration the plight of the common Nigerians; the National Labour Commission, The Trade Union Congress and the Joint Action Fronts have called for all Nigerians to indefinite strike/mass action to resist the wicked increase in fuel prices. Consequently, there will be further Mass action, street protests, and indefinite stay at home as from Monday January 9, 2012 until there is a call off from the above mentioned organisations after the reversal of the presidential proclamation of subsidy removal.